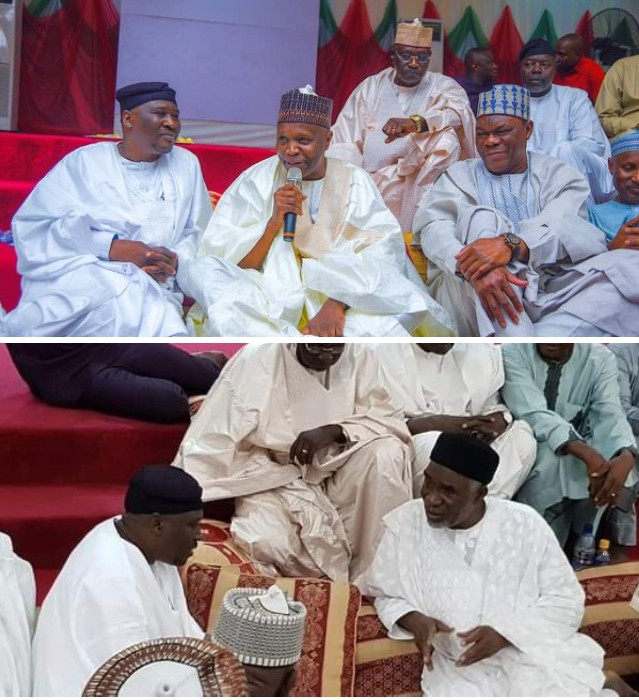 HE Muhammad Inuwa Yahya Gombe state governor and entourage, on behalf of the people of the Jewel in the Savannah, have joined those who visited Adamawa state to register their condolence over the death of Alh. Umaru Badami the father of HE governor Ahmadu Umaru Fintiri.

It was not enough for Admiral Murtala Hammanyero Nyako the former governor of Adamawa state to register his condolence through the media, Baba Maimangoro would have to visit governor Fintiri to personally commiserate with him over the death of his father, which sad incidence occurred on Sunday.

It could be recalled that where former governor Bindow got it wrong, which could have been a befitting sympathy window for reconciliation, governor Fintiri has taken advantage thereof for a cemented rather metaphoric father and son relationship beyond political boundaries.

When Hajiya Zainab the wife of Admiral Murtala Nyako a mother of blessed memory died sometime last year, governor Fintiri considered the incidence as his own tough sorrow. Fintiri did not only condole, he also received condolence with Baba Maimangoro and the family in the house.

Fintiri also joined the family for the funeral prayer and mourning when Nyako’s cousin died recently, even when the governor was said to be having a SEC meeting; “that’s simply the spirit,” a political analyst would observe. Details take another story.

Thehe management of tertiary institutions such as the Federal Medical Centre Yola and Modibbo Adama University of Technology Yola, among others in addition to other organizations and groups of individuals equally joined the Fintiri family in mourning the loss of the father, Alhaji Umaru Badami.

Fintiri was visibly grateful to God and appreciative of the overwhelming population of mourners who joined him and still counting as backup, to cushion down his sorrow as the mood of the moment in and with prayers.