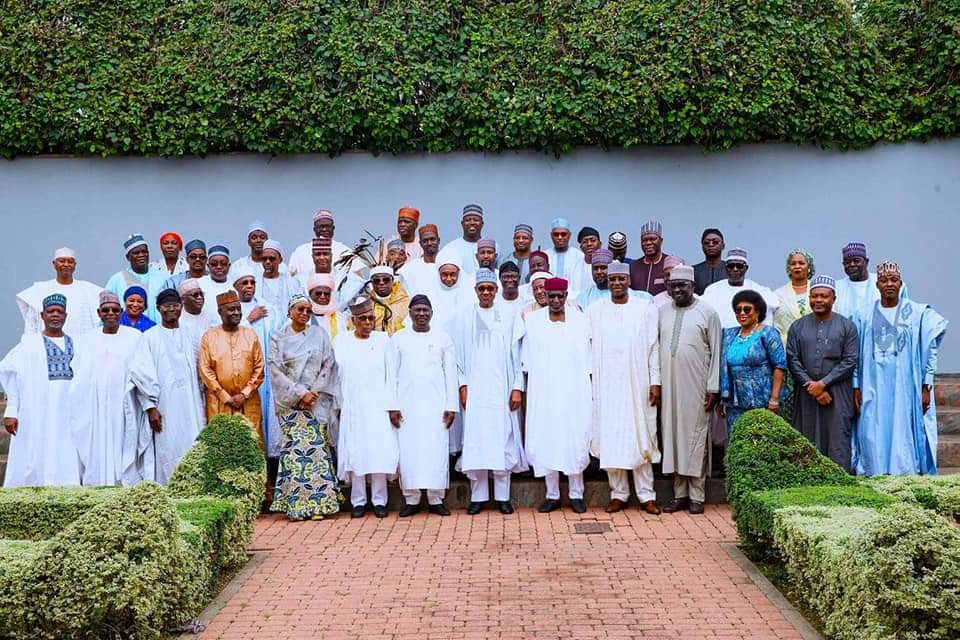 The Adamawa elder statesmen, led by Governor Ahmadu Umaru Fintiri were at the State House on a solidarity visit Thursday, to express formal appreciation to President Muhammadu Buhari for the reappointment of some indigenes of Adamawa into key government positions as well as restoration of peace across across the land of beauty, the Periscope can reveal

Commenting, governor Fintiri commended President Buhari for bringing back peace to the northeast.

“I’ll be failing in my duty as the chief security officer of Adamawa state, not to thank you for the supreme effort you have made to flush out insurgents in the northeast, which is now enjoying relative peace.

“It’s on record the armed forces of Nigeria responded promptly to Mr President’s order to put down the insurgency, which has been done, except for the pockets of isolated attacks on soft targets,” Fintiri commended

Fintiri has taken advantage of the occasion to re-echo a case for conversion of of Modibbo Adama University of Technology MAUTECH Yola to a conventional university.

The recent decision taken by the federal government to stop management science courses in specialised institutions of higher learning like MAUTECH, Fintiri said, has serious implications for the community just recovering from the grueling insurgency.

“The insurgency and the generalised insecurity on the roads, have discouraged parents from sending their wards to the neighbouring conventional university out of fear.

“To cut a long story Mr President sir, the stoppage of popular courses will lead to further underdevelopment of an already educationally disadvantaged impoverished state, severely devastated by insurgency and insecurity,” Fintiri said.

The Fintiri led Adamawa community to the presidency, joining the popular call, solicited for the upgrading of Federal Medical Centre Yola to a teaching hospital, owing to the state’s lowest human development indices in respect to healthcare services.

Responding, President Muhammadu Buhari disclosed that decades of under-investment in education and healthcare, contributed to the current insecurity facing the nation.

“I’m delighted to receive your delegation today. Adamawa is home away from home to me, as you are all aware. Therefore, this meeting is more or less a family gathering.

“I am pleased to hear your remarks, specifically focused on issues around education and health. These areas remain priorities for this government, especially as we strive to achieve social inclusion and collective prosperity for all Nigerians.

“Many of the issues confronting our nation today, especially in the areas of insecurity and corruption, are directly or indirectly linked to the decades of under-investment in education and healthcare.

“At the Federal level, we are doing our best to address these issues. But the Federal Government cannot do it alone. We need the state and local governments to do their part. This is not about politics; it is the reality.

“Today, majority of Nigerians are below 20 years. And it is projected that our population growth rate will remain amongst the fastest in the world. This means any plan we have today must take into account the needs of tomorrow.

“I have taken note of your requests and recommendations. We shall review and act accordingly. I would suggest, however, that you make a formal, written submission to my office in due course,” President Buhari said.

The President expressed condolence to the governor and the people of Adamawa State over the death of his father, Alhaji Umaru Badami.

Mr President prayed for the peaceful repose of his soul.

Addressing State House correspondents at the end of the meeting, Governor Fintiri, who is of the Peoples Democratic Party (PDP), said Adamawa state would need the support of the Federal Government in agriculture, human development and roads.

Fintiri stressed that many Federal roads in the state had become dilapidated.

Fintiri said the focus of his administration was on security, education, infrastructure development, among others.

“We have given a very serious attention to security, health, infrastructure and education, agriculture and human development.

“I want to see that our youths are completely emancipated and empowered so that we don’t have the youth restiveness, which culminated in the Boko Haram menace.

“When I assumed office in Adamawa, I met a serious challenge of youths in criminality, which was nick-named ‘Yan Shila’. Today, they are no more. So, these are serious areas of concern. I have given it a serious attention and it’s working well.

“Kidnapping has reduced drastically. You hardly hear people being kidnapped again in Adamawa. This is as a result of the collaboration we have with the security agencies and the support we have been giving them to ensure that they curb criminality and criminals in the state,” Fintiri said.

On why he led a delegation of the people to see the President when his state was considered a stronghold of the opposition PDP, Fintiri said his concerns were about governance and the welfare of the people and not politics or elections.

“Today, we are not talking about election; we are talking about governance. Really, we have come to see Mr President, and if you see from the cream of the personalities we came with, they cut across party lines and ethnic nationalities.

“We look at ourselves first as Adamawa and secondly, the problems that concern us, and we have come to where they would be solved. By God’s grace, we have made our cry loud and it would be solved by Mr. President,” Fintiri said.