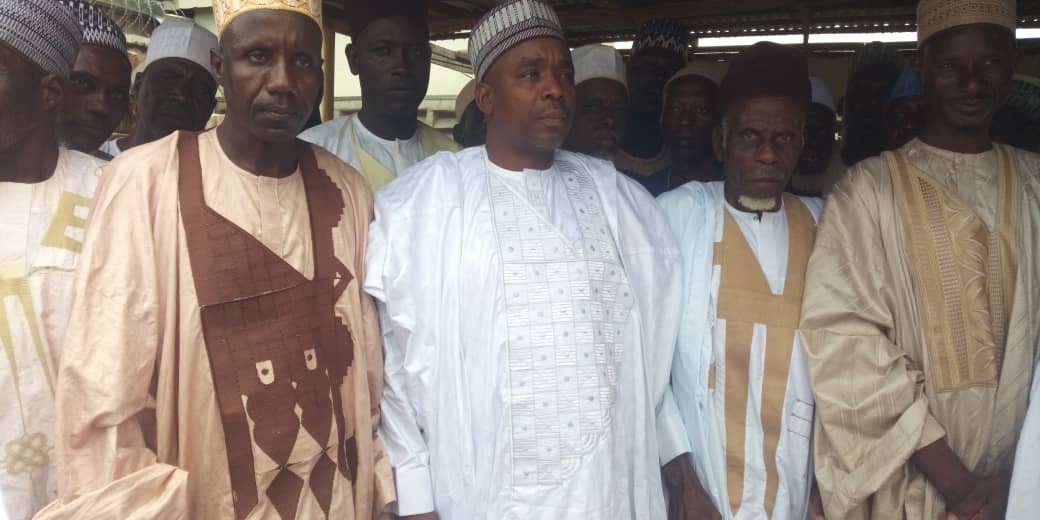 -When the spokesman presented Barr. Mahmud before Garkuwan Mubi Alh Adamu Duhu as Yarima Maiha, AA Duhu quickly cut in, with the point of correction that Mahmud should be addressed not as a prince but Ubandoma Mubi-

The tussle on the legitimate heir to the stool in Jalingo-Maiha District, lingering for over five years, is though slowly but gradually and steadily coming to its desired end with every step to the stool exposing the actors in conspiracy and hypocrisy intended to permeate the mutually coexisting community and it’s monarchy with unimaginably unpermitted dissension and intolerable anarchy

His Highness Alhaji Abubakar Suleiman the Ubandoma Mubi and District Head of Jalingo-Maiha District transited to great beyond on March 13, 2014, to this day- in spite of the nomination by the supposed kingmakers, the final selection by the Mubi Emirate Council, the refusal by Governor Bindow, claiming Maiha kingship, to submit to the law and do the needful, the High Court order, the stubborn refusal on the part of governor Bindow to obey the Court Order; doing the bidding of the inordinate ambitious whose obnoxious proposition was to bring back Bindow to Dougirei hill even if through the widow’s window however terrible the windy like “Fair is Foul and Foul is Fair as chanted by the three weird sisters, psychologically taken as the ugly side of the overambitious Macbeth, the humiliating defeat of Bindow at the poll; the conspirators could not push even through the widow’s window even when it was not windy, the governor Fintiri’s directives to obey the court order- the stool remains vacant, philosophically elongating the tenure of the deceased to the stool.

The “stupidiotic” minded have challenged the authenticity of the Periscope Crime Scene Reports on the monarchy in Jalingo-Maiha but could not deny that their fictitious master the impostor, has been in romance with the contempt of court; parading himself as district head for which he was restrained, directed to refrain from…

The group without attitude, invoking the name of the Most Merciful, could not deny that their fictitious district dead as relates to the monarchy in Jalingo-Maiha, deployed the services of the ‘Yan Gora militia in the name of security to accompany him for anarchy against the aristocracy.

Macduff could be conceived as the avenging hero who helped saved Scotland from Macbeth’s tyranny in William Shakespeare’s play; “Macbeth.”

Having recieved the high-powered delegation, Barr Mahmud Abubakar Suleiman the Ubandoma Mubi the District Head of Jalingo-Maiha selected by the Mubi Emirate Council and legitimised by the court of law, thanked the people of Jalingo-Maiha for their patience and obedience to law in the face of intimidation.

Barr. Mahmud sued for peace and mutual coexistence. The strength of Maiha, he said, hinged on its untainted unity and the patience of its people.

“I do not and will not join issue with the government and the law.

“I remain law abiding. In spite of the court ruling, I’m still waiting for its implementation by the governor of Adamawa state as recommended.” Barr. Mahmud would say.

The high-powered delagation seeming intolerant to the Impunity associated with the contempt of court, a trespass stretching to dissension for anarchy against the established monarchy and the nobility of Jalingo-Maiha, were led by Barr Mahmud to some kingmakers of the Mubi Emirate.

Alh Muazu Hamman the Danburam Mubi, having welcomed the delagation, pleaded with them to be patient as the Most Merciful has already decided for Jalingo-Maiha, its legitimate District Head based on the selection of the Mubi Emirate Council.

Danburam has called on the real men not to be deterred or intimidated by the empty, diversionary tendency and the live performance of a fictitious character who took advantage of playing the contempt of court without security restraint to deceive the gullible that he was beyond the king, the state and the law.

When the spokesman presented Barr. Mahmud before Garkuwan Mubi Alh Adamu Duhu as Yarima, AA Duhu quickly cut in, with the point of correction; that Mahmud should be addressed not as prince but as Ubandoma Mubi.

“No, no, no! You’ve accompanied Mahmud the Ubandoma Mubi. May Allah SWT guide our cause aright.” AA Duhu simply, summarily said.

“Reconstructing AA Duhu’s, Barr is now beyond a prince, he is Ubandoma Mubi and no one other than Ubandoma Mubi can be a district head of Jalingo-Maiha.

“Has Idi the impostor ever claimed to be Ubandoma Mubi? Has any of his gullible apologists ever addressed him as Ubandoma Mubi? Any answer will suggest whether or not the Shakespearean court jester can be a district head of Jalingo-Maiha, now that Bindow isn’t anymore, not even through the widow’s window, whether or not in a windy weather,” A literary critic would articulate.