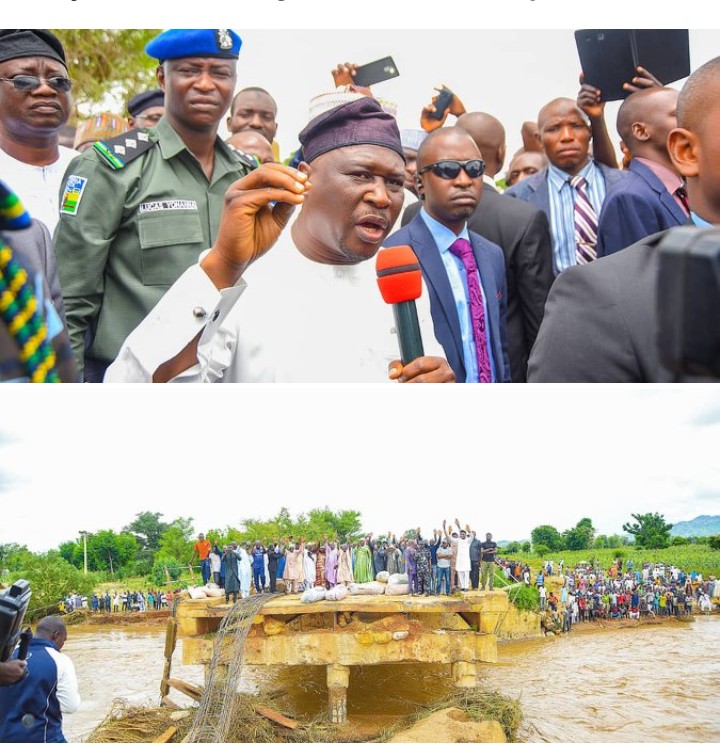 The Periscope on the spot

Disappointed by the discouraging progress on rehabilitating Dilchim and Kudzum Bridges in Michika local government area of Adamawa state northeast Nigeria, Governor Ahmadu Umaru Fintiri has called on the federal government to intensify pressure on the contracting firm, Rhas Nigeria Limited to hasten the completion of the projects with a view to ameliorating the sufferings of the rural dwellers, the travellers, and boosting the economy and security of the northern senatorial zone of the state.

Fintiri expressed dismay over the delay in the execution of the project, which he said has technically crippled businesses, threatened security and ushered untold hardship in Michika and Madagali local government areas that have been cut off from Adamawa and Borno States exposing the citizenes to the Boko Haram insurgency.

Fintiri also urged the contractor to urgently provide temporary measures at the collapsed Dilchim bridge as palliative measure for the people of Michika and Madagali Federal constituency.

The site engineer at the Dilchim Bridge, Mr Joshua Yakubu explained that the delay of the project was as a result of the activities of insurgents that has devastated the area.

Yakubu said that at the moment, they have commenced work in earnest on the site and appealed to people of the communities to exercise patience as very soon the bridges would be fixed.

Some residents of the communities who spoke to newsmen lamented on the precarious condition of the bridges and called on government to assist them by ensuring timely completion of the project.

It could be recalled that the Dilchim and Kudzum Bridges were among other bridges bombed by Boko Haram Insurgents and the federal government has awarded the contract for rehabilitation of the bridges and the road to Rhas Nigeria Limited in 2016.

Three years after, the story of the work done remains unpalatable to tell as much as it remains pathetic for the people of Michika and Madagali who could not cross over during the rainy season as it is presently.

It is a federal road, federal government must do something about it, urgently too.