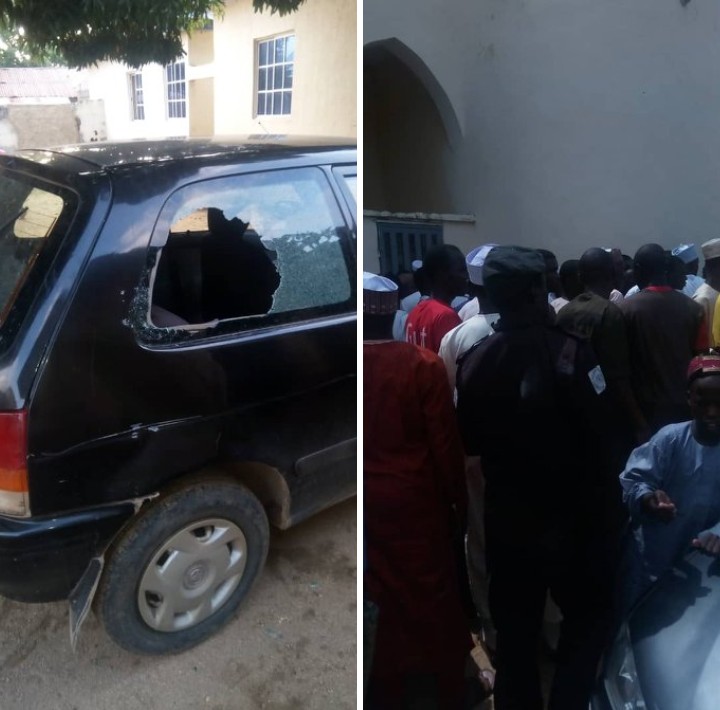 It would seem that the people of Jalingo-Maiha District have exhausted their patience against the impostor and the accomplices to conspiracy sowing the seed of anarchy in the monarchy of Jalingo-Maiha.

Wakili Usman Shehu Idi has stubbornly been violating court order that restrained him from parading himself as district head.

Reacting to Idi’s to have been behind bar, above the law excesses, that he should be barred from having access to the District Head’s Palace that would remain never to be his birthright, he would want to force himself into, the youth in their numbers, insisted that Idi would not have access to observe Friday prayer in Jalingo-Maiha Central Mosque as a claimed district head.

“Since he was here to pray as an impostor in romance with the contempt of court order, acting as district head, he couldn’t have access to the Central Mosque this Friday and any other Friday in future.

“Should Wakili Usman Shehu Idi wants to pray in congregation with the faithful anytime at the Central Mosque, he must be submissive to law and to God humbly as an ordinary person but not a district head,” the youth would argue.

However, Idi’s idiotic supporters, were seen displaying different kinds of arms as they were said to be trained to disrupting peace for anarchy, iconoclastically threatening fire and brimestorne as if been promised an election sure.

The Idi anarchist supporters led by one Mustapha Ustaz Jibrilla Mahmud, visibly turned violent, breaking into houses, and shops and in the name of ending peace in Jalingo-Maiha District, if Idi would not be considered as district head.

The Idi anarchist supporters’ unruly actions, were summarily ignored by the youth and men with conscience in Jalingo-Maiha.

Earlier on Thursday, Barr Mahmud Abubakar Sulieman the legitimate heir to Ubandoma, the Mubi Emirate selected and the court recognised and directed for approval by the Adamawa State Governor, as District Head of Jalingo-Maiha District, wrote a petition addressed to the Commissioner of Police against Idi’s violation of court and administrative orders with the title:

It was a formal petition against the disastrous activities of Wakili Usman Shehu, which could count for an insurgency against the state and anarchy against Jalingo Maiha District, by submitting himself to the injustice associated with the contempt of court order for which he engaged in since July 2017.

In a declarative judgment of July 13, 2018 of the High Court of Justice of Adamawa State of Nigeria, in the Yola Judicial Division Holden in Yola, Suit No. ADSY/111/2017, the court order has restrained Wakili Usman Shehu known as Idi from parading himself as the district head of Jalingo-Maiha and directed for the approval of the petitioner Mahmud Abubakar as the District Head of Jalingo-Maiha.

A copy of the High Court Judgement holden in Yola was attached to the petition letter.

In spite of the court judgment, however declarative, Idi went ahead parading himself as a district head of Jalingo-Maiha, an action considered in law to be contempt of court order.

Reacting to the repeated injustices and flagrant abuse of court order, Wakili Usman Shehu was in 2018, in accordance with civil process and sheriff act cap 6 law of the federation of Nigeria 2004, served with forms 48 and 49 consequences of refusing to obey court orders and committal forms respectfully by a Yola High Court.

Wakili Usman Shehu, in spite of the forms 48 and 49 served to him, kept on with flouting court order, considered as a technical attempt to plunging Jalingo-Maiha District into dissension for anarchy.

With the coming of the newly democratically elected government in 2019, the case of Jalingo-Maiha District, which suggested for the approval of Mahmud Abubakar, the petitioner, as the district head, was presented to Rt Hon Ahmadu Umaru Fintiri the newly elected and sworn in governor on June 18, 2018, where he instantly directed that the court order that has been disobeyed for far so long a time should be respected.

In spite of Governor Fintiri’s directive to honour the court order, Wakili Usman Shehu kept on parading himself as the district head of Jalingo Maiha, because, as his supporters conceived, Fintiri would be dismissed by the tribunal hearing election cases to bring back Bindow

This necessitated serving Idi the impostor with a warning letter to be restrained from parading himself as the District Head of Jalingo Maiha, by Adamawa state government.

The copy of the warning letter signed by the Permanent Secretary Chieftaincy Affairs Adamawa State, though called for deconstruction, was attached to the petition letter.

Wakili Usman Shehu, in spite of the state government’s directives to honour court order, has on August 19, 2019, parading himself as a district head of Jalingo-Maiha, participated at the security meeting, held in Maiha Local Government Secretariat convened by the Chairman Maiha Local Government, where he was said to have requested that adequate security should be ensured around the Palace Jalingo-Maiha District he has the authority to reclaim.

Mahmud Abubakar said he deemed it necessary to write the petition letter, requesting that Wakili Usman Shehu should henceforth be restrained from parading himself as district head of Jalingo-Maiha with a view to respecting the court order that defined the petitioner as the legitimate Distric Head of Jalingo-Maiha in the interest of peace and mutual coexistence.