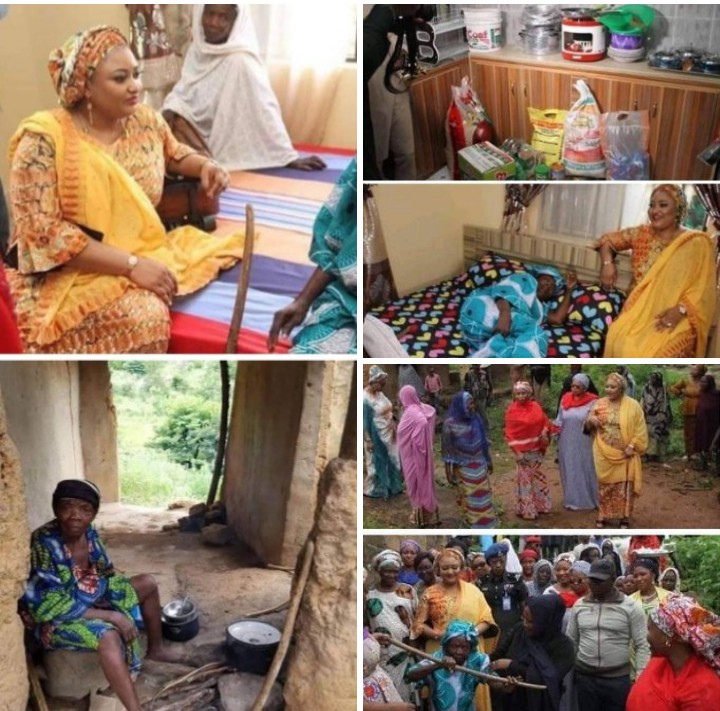 Some commentators conceived it as an act of philanthropy while some critics considered it as nothing other than political exhibition aimed at canvassing for her husband’s second mandate, the information that Hajiya Rashidat the wife of Governor Yahaya no-salaries Bello of Kogi state has “changed the fortune of an octogenarian lady, Madam Hauwa’u, by building a modern house and making it a more comfortable home for her.

Responding on the development, a group of women led by Adijah Salifu revealed to the Periscope that it was a welcomed development.

“This is what can be considered as a dividend of democracy. Once upon a time, a hopeless aged woman, is now taken out of the life of poverty, the life of squalor. Hajiya Rashidat the Kogi first lady must be commended as we congratulate the old woman Hauwa’u,” Adijah said.

Reacting on the development, Salamat Salami simply said the gesture was not out of kindness but political appeal, motivated by the governorship election just around the corner.

“Why is it now? Isn’t it a campaign strategy in favour of her husband to succeed himself in the coming Kogi gubernatorial election?

“Governor Yahaya Bello couldn’t pay workers salaries for over a year, yet his wife has the spirit to bring an old woman out of poverty.

“Does the governor’s wife know how many civil servants and/or their relatives lost their lives to starvation for lack of or delayed payment of salaries?

“Does the governor’s wife know how many civil servants have the likes of old Hauwa’u to take care of but we’re denied their legitimate earnings.

“How many Hauwa’u would have been helped against poverty with the payment of civil servants salaries,” Salami argued