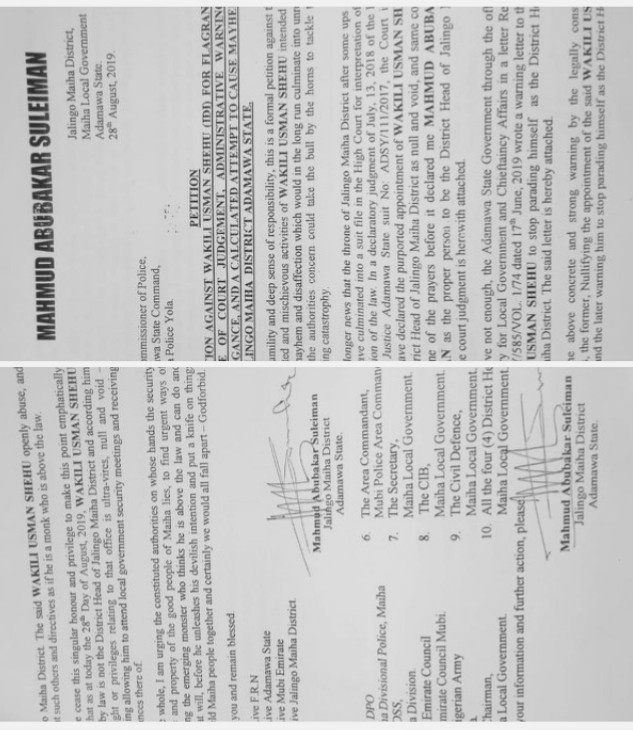 Thursday was the day petition letter against the excesses of impostor Wakili Usman Shehu Idi, the seeming above the law, who enjoyed romancing with the contempt of court order, was presented to the Commissioner of Police and copied to other security agencies with the aristocracy of Mubi Emirate and District Heads within Maiha local government area

Friday, the contempt of court and violation of executive orders were to meet resistance from the citizens with conscience who would not want to be led by the impostor with impunity.

The conscientious citizens insisted that an impostor would not pass through the gate leading to the central Mosque, the passage meant for the legitimate district head. His disciples threatened life with knives among other weapons against anyone who would not recognise their paymaster the impostor as district head.

The impostor’s riotous disciples in fracas, broke into shop, vehicle, pelted and stabed the heirs to Ubandoma and other citizens, singing a symphony of destruction, defining the calculated attempt to cause mayhem as predicted by the Mahmud’s Petition Letter.

The impostor’s sponsored punks, went on heinous rampage, a barbaric parade, brandishing sharp objects, characteristic of the saveges in Jalingo-Maiha, threatening blood of the innocent citizens as if the effect of insurgency that lelft many in mourning for which Maiha was a casualty, being part of the northern zone of Adamawa State northeast Nigeria, was not eternally internalised by the uncultured, bereft of attitude, enough to be bereaved however briefly, by their to have been remorseful parents bamboozled by the neglect of their initial responsibilities of proper parenting.

The good citizens, the responsible parents, simply advised their children never to be intimidated; to be calm against taking of arms to confront the impostor’s sponsored seeming militia.

Those stabbed and pelted by the injurious pebble-happy impostor’s sponsored, would not be spared even when on admission at the lacking facility; the Bindow government abandoned Maiha cottage hospital they claimed to have facelifted, a claim, which shamefully appeared to be a fantastic deception in a technical “digital” colouration characteristic of the republic of liars meant only to consume the products of defective memory.

But for the deployment of security operatives, the scenarior would have signed another Satanic verses, to be sung by the stinky sinking-thought, sinner-thugs; the chronic-know-nothing, thingified by the overambitious impostor.

Thanks to the quick intervention of the security force, Jalingo-Maiha would have experienced what was feared as contained in Barr. Mahmud’s Petition Letter Against the impostor Wakili Usman Shehu Idi.

The following is the Petition letter for the record:

With humility and deep sense of responsibility, this is a formal petition against the calculated and mischievous activities of Wakili Usman Shehu (Idi) intended to cause mayhem and disaffection, which would in the long run, culminate into unrest unless the concerned authorities could take the bull by the horns to tackle the impending catastrophy.

As the above not enough, the Adamawa State Government through the office of the Ministry of Local Government and Chieftaincy Affairs in a letter to the said Wakili Usman Shehu to stop parading himself as the District Head of Jalingo-Maiha District. The said letter is herewith attached.

Despite the above concrete and strong warning by the legally constituted authorities, the former, nullifying the appointment of the said Wakili Usman Shehu and the latter warning him to stop parading himself as the District Head of Jalingo-Maiha District the said Wakili Usman Shehu openly abuse, and flaunt such orders and directives as if he is a monk who is above the law.

Let me cease this singular honour and privilege to make this point emphatically clear that as at today the 28th Day of August, 2019, Wakili Usman Shehu Idi by law is not the District Head of Jalingo-Maiha District and according him, any right or privilege to that office is ultra-vires, null and void- including allowing him to attend local government security meetings and receiving allowances thereof.

On the whole, I am urging the constituted authorities on whose hands the security of lives and properties of the good people of Maiha lies, to find urgent ways of stopping the emerging monster who thinks he is above the law and can do and undo at will, before he unleashes his devilish intention and put a knife on things that held Maiha people together and certainly, we will all fall apart- God forbid.

Thank you and remain blessed

Above is for your information and further action, please.