Opinion: Life beyond Okada riding, why the north must hear us 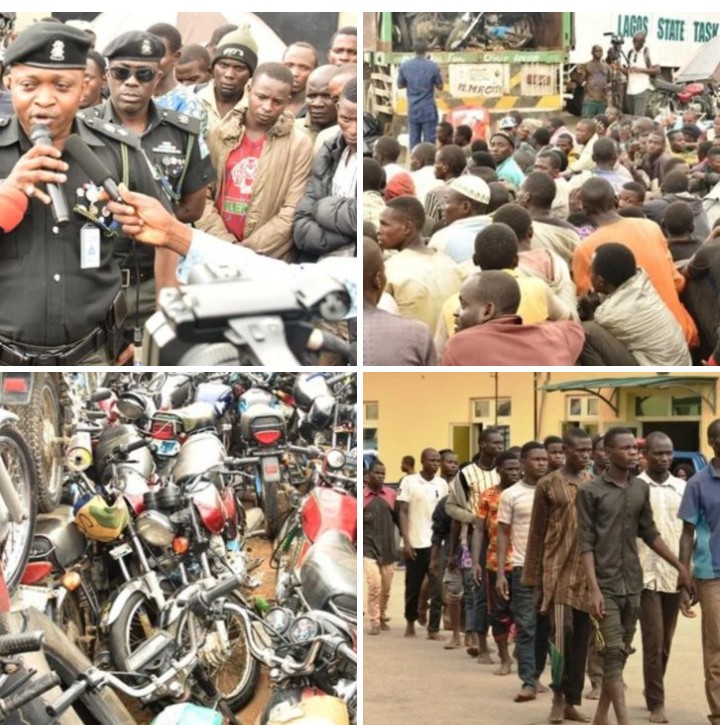 Opinion: Life beyond Okada riding, why the north must hear us

If our greatest export to lagos is Okada riders, then there is something to be worried about.

The arrest of the Jigawa travellers is condemnable no doubt but beyond that is the fundamental reality that the voyage to lagos by these guys is embarrassing. Having a trailer load of young able-bodied men going to lagos, not for anything artisan but to ride Okada is not just appalling but an indictment.

You need to see the picture or video to see the debasement of self by these guys. Clad in shirts and trousers are these travellers piled up in the trailer sandwiched in between wheels of motorcycles.

Thank God there wasn’t accident, casualties would have been counted. There is that thing called dignity, please. The quest for the pursuit of happiness does not mean we should trade our dignity to the wind.

I cringed seeing fellow youths in this kind of debased voyage. We need not show emotions over this issue but to look at the implications of having your young people in lagos riding Okada, sleeping in the open thus endangering their health.

Having over hundred people leave a state in a day in search of survival shows a scary reality. It means a fundamental leadership flaw, a failing system and a big indictment of our leaders. You can’t have a trailer load of people into another state and expect the state to welcome them in a convivial embrace, especially when these people are not skilled in any way. States plan their budget based on existing population figure, it is with these figures they aggregate for health, education, security, water, electricity, emergencies etc. No one would allow such intrusion that will become a burden to her system.

That lagos is an attraction to our people shows evidently that things are working in Lagos, that things are working in Lagos shows some people were genuinely deliberate in making Lagos work. In Lagos, almost everyone has something doing and command that purchasing power. This is not magic, it’s simple logic, the people backed by purposeful leadership made this possible. While Kano used to be an industrial hub pre-1999, for 20 years, it failed in reviving her industrial strength. Like joke, kano was reduced to an administrative state where politics and religion became the reference. The same fate with Kaduna, nothing works anymore except political patronage. The textile industry is lying comatose in pitiable state as no government present or previous has shown any genuine commitment to bringing back the roaring wheel of production.

The north is gifted with multiplying population and ironically with no commensurable engaging power. You don’t produce a multitude of human heads and make nothing available for their survival. Expecting others to carry your burden is a crass abdication of responsibility. Our leaders must remove the wool on their eyes and do the needful. The northern youths around major cities riding Okada are an embarrassing eyesore to Arewa image. Every tribe has her peculiarities, they don’t push them to others, they manage them. We must find a way to manage these perennial peculiarities.

These guys can actually remain in the north to till their land and become rich farmers instead of parading the city centres of our capitals. How could an able-bodied man leave his house to another land and be sleeping in mosques? Why leave your land to where you are less productive? The truth must be told, my Hausa folks loitering in other states of Nigeria needs to be recalled back and sent to the farm. Farming is not a sentence to hardship but a license to self-sufficiency.

The world is a race and no region wants to be left behind in the destination of progress. Population shouldn’t be just for electoral advantage, let it be for overall fortune whereby the same way we have numerical strength in electioneering decisions, we are also envied by others for having a gamut of professional doctors, engineers, nurses, journalists, and other human impacting -professions and not an embarrassing army of almajiri, mairuwa, and masu Okada.

In Nigeria, only Arewa youths go out in search of surviving fortunes with no trade or expertise at hand. It is irresponsible to migrate to another man’s town where you have nothing to add. Education and trade alone give the liberty for seamless migration. When you don’t have any of these, then you are a nuisance to your intended destinations.

As the imbroglio between lagos and Jigawa lingers, let’s not see it as an extension of regional hostility but an affront for introspection. Welcome your returnees and speak sense into their heads that they are better off as farm owners than night guards and petty hustlers. The most rewarding hustles are the one you are in control of your financial decisions.

Coming back to your base is a big boost to your family orientation as you are more at home to provide for the needs of your family. A situation where husbands abandon their wives and children for months speaks no good of an ideal husband as exemplified by the Prophet (SAW). Children upbringing should not be left for the women alone but let it be a collective population.

Welcome back our northern breadwinners, home is where you are a man, as you are always a slacking stranger where your skills are not needed. These guys are back home not as a result of persecution or threat of war but back to reclaim their lost manhood. Marhaba jamaan arewa daga kudu.

You inherited not an only a roof over your head but also a farm that’ll give you and your family steady food to last till another rainfall. There is avenue for you to do “kwadago” and have some little cash in you, you could’ve cross plant your inherited farm with some cash crops. Yet, you threw all your inheritance away and went on “yawon-bariki” in Lagos. You spent years there with nothing to show for it, you engaged in menial jobs like selling of sugarcane, “Yankan-farce” and being “me-guard.”

You refused to stay at home, do respectful jobs and raise a family and whenever there was a score to settle, you became a sitting duck, an easy prey that could be attacked. To a sane person, the only way to remedy your worsening scenario is to retrace your steps, go back to your land, reclaim it from the overgrown weeds and in doing so,
regain your dignity.