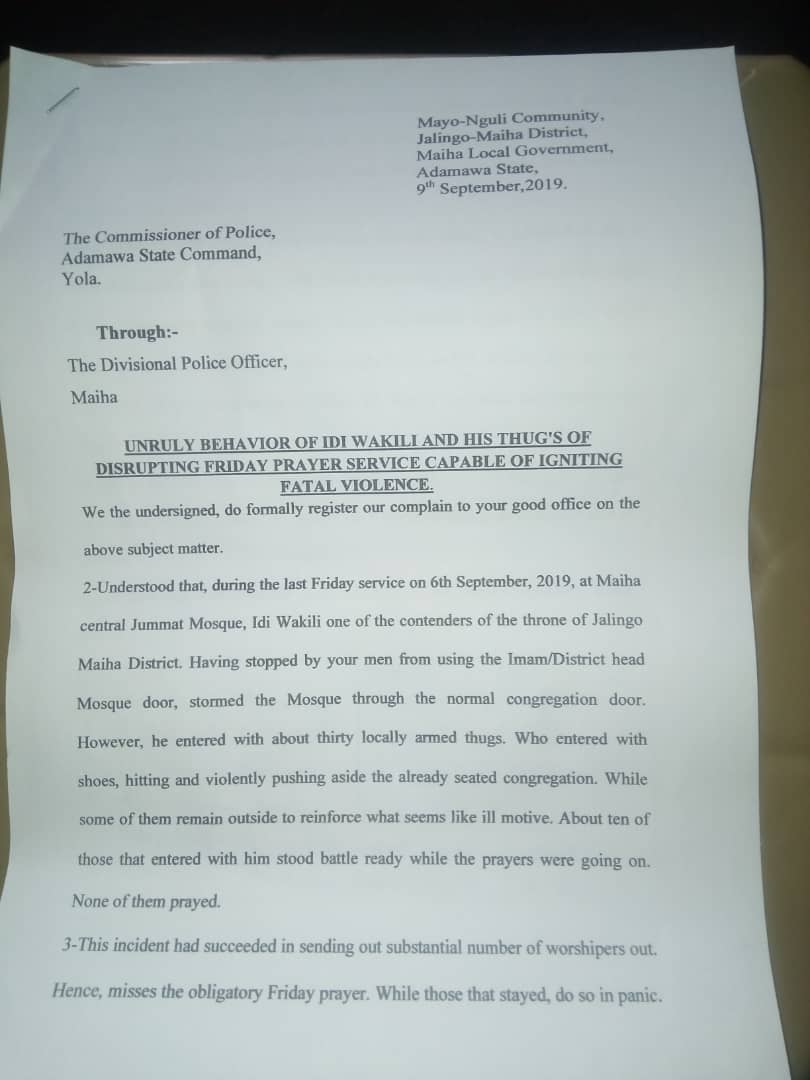 Following the stubborn refusal on the part of Wakili Usman Shehu Idi to honour the court and the executive orders that restrained him from parading himself as District Head and the classical exhibition of arrogance in declining to answer the invitation sent to him by the Commissioner of Police, sequel to the petition letter against the Idi-a-za-tion of the aristocracy of Jalingo-Maiha for anarchy, which eventually happened the during previous Friday prayer, the Mayo-Nguli Community constituting the cross section of stakeholders in Jalingo-Maiha District, Adamawa State Northeast Nigeria, numbering over three thousand members of varrying demography, wrote a petition letter to the Commissioner of Police against the impostor with his sponsored arned thugs who without ablution, without removing their stinky and filthy shoes, forced themselves into the most with the intent to fetishly disrupt the Friday prayer, even when Mammons do not go to Muhammad SAW who goes to the mountain for meditation.

In a petition letter titled: Unruly Behavior of Idi Wakili and His Thugs Disrupting Prayer Service Capable of Igniting Fatal Violence, the community requested the Commissioner of Police to address Idi’s excesses before it would be too late.

The later reads in part:

We the undersigned, do formally register our complaint to your good office on the above subject matter.

Understood that during the last Friday service of 6th September, 2019, at Maiha Jumua’t Central Mosque, Idi Wakili one of the contenders to the throne of Jalingo-Maiha District, having been stopped by your men from using the Imam/District Head door leading to the mosque, stormed the mosque through the normal conggression door with about 30 armed thugs who entered with their shoes, hitting and violently pushing the already seated congregation, while some of the thugs remained outside to antagonise worshippers.

The about 10 armed thugs who entered the mosque with their filthy shoes, did not pray, they served as paid security to Idi in the mosque as they surrounded him while prayer was in session

This seeming scarry incident has succeeded in driving away sizable number of worshippers who smelt trouble, from the mosque.

Though the presence of security officers at the mosque has helped in dousing the tension, the question remained that the armed thugs were not prevented from entering the mosque.

This is a call against anarchy being championed by an impostor claiming to be above the law.