What Does Buhari Tell Melaye In A Viral Photo Saturday? 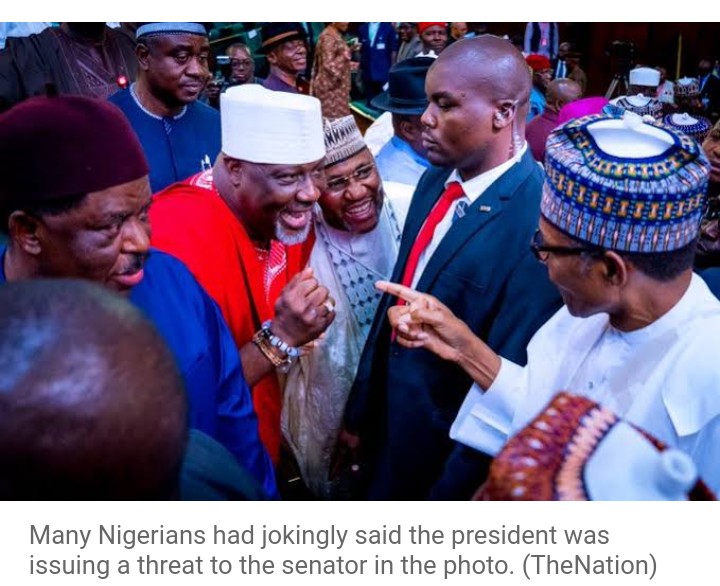 As Nigerians continue to guess what President Muhammad Buhari could have said to Senator Dino Melaye in a photo that recently went viral, a source has revealed what transpired between the president and the senator, TheNation reported.

In the viral photo, President Buhari pointed his index finger at Melaye, while the senator appeared to be hailing the president with a salutary fist.

The picture surfaced online on Tuesday, October 8, 2019, after President Buhari presented a record N10.33 trillion ($33.8 billion) budget proposal for 2020 to the National Assembly.

Nigerians have been wondering what the President could have said to the senator considering Melaye’s confrontational stance with the ruling All Progressive Congress and the President.

In their captions of the photo, many Nigerians had jokingly said that the president was issuing a threat to the senator.

But according to the Nation, a source said President Buhari only asked Dino Melaye: “You mean you are still in this chamber?”

Meanwhile, Melaye has lost his appeal against the decision of the National Assembly/State Assembly Election Petitions Tribunal to sack him as the senator representing Kogi West.

The election tribunal had sacked Dino Melaye as the representative of the Kogi West senatorial district in the Senate in a ruling in August.

The Independent National Electoral Commission (INEC) had declared him winner of the election that was conducted on Saturday, February 23, 2019 for a second term in the upper legislative chamber.