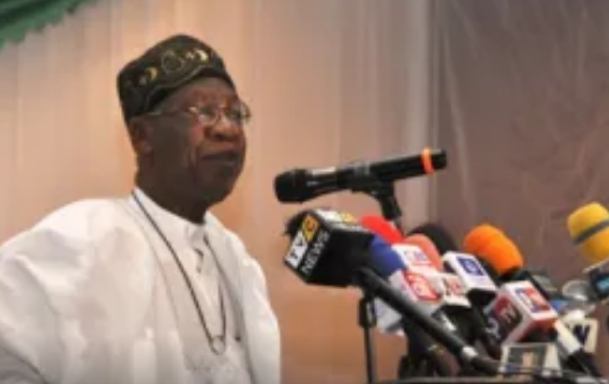 The Vanguard reports that the Minister of Information, Alhaji Lai Mohammed, has lamented the growing lack of patriotism among Nigerians, saying many citizens today can neither sing the National Anthem nor recite the National Pledge.

This was as the government also clarified its decision to launch the “Change begins with me” campaign in September 2016, saying the move was not an attempt to ingrain the change mantra of the ruling All Progressives Congress APC in the minds of Nigerians, but that the programme was designed without any partisan consideration.

Lai Mohammed stated this Thursday in Abuja at the public presentation of the Mindshift Advocacy for Development Initiative – an organization advocating for value-reorientation and attitudinal change among Nigerians.

The minister who was represented by a Director in the ministry, Mr Samuel Soughul, also lamented that in spite of the best attempts of President Muhammadu Buhari to reposition the country for greatness, few bad eggs in the society continue to constitute a clog in the wheel.

“I think we are making progress. I won’t say all, there are few bad eggs in our society that are forming the clog in the wheel of our progress.

“The National Anthem, some of us cannot read, cannot recite, cannot write. Is it the currency of the country, Naira that we abuse? Is it the Constitution that we do not obey its provisions? We have a lot to say but the future is still bright.”

Mohammed continued: “In 1976, there was a desire by Prof. Felicia Adewole to come up with a contract for citizens to sign with their country, Nigeria and she made a draft which was proved right. That is what we have today as a National Pledge. By following that Pledge, we will not have turbulence around our homes, we will not need bullet-proof vehicles, we will be our brother’s keeper.

“Our tertiary institutions, the award certificates based on the fact that the graduands have been ‘found worthy in character and learning’. Now, President Muhammadu Buhari, having viewed this with concerns, on Thursday, September 8 2016, launched a value-reorientation campaign ‘Change begins with me’. This campaign is not a slogan and it should not be associated with party slogan as such. It is a patriotic slogan and campaign – a value-reorientation campaign. What it means is that the change we want should start with us instead of pointing accusing fingers,” Mohammed said.

Earlier, convener and co-founder of the Non-Governmental Organisation, David Okupe lamented the geometric increase in cyber-crimes among youths and urged citizens and political leaders to stop being hypocritical in most of their dealings