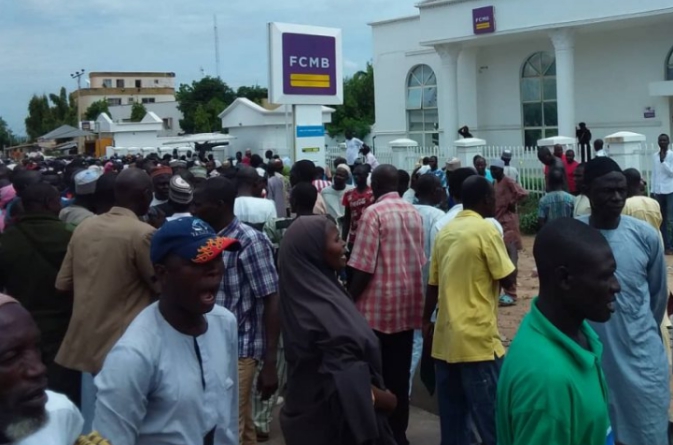 The IDPs who were registered under the Federal Government/World Bank supported programme of Youth Employment and Social Support Operation (YESSO) said few of them had already received alerts ranging between 1m, N700,000 and N400,000 from FCMB, which is the disbursement bank for the YESSO programme.

“The bank deliberately stop the network to deprive us but we are not going anywhere until they give us our money.

“We leant that the money we are entitled to is N1.2 million and they just want to shortchanged us; that’s why some got over a million, some N700,000 and people like me who got N400,000,” said Mohammed Abubakar one of the IDPs.

The IDPs who grounded activities in the bank blocking motorists plying Atiku Abubakar way to other parts of Yola insisting that they would not leave until the bank pay them their money.

Some of the IDPs who succeeded in withdrawing part of the money over the weekend said they were also at the bank for the remaining balance.

The former Adamawa Coordinator of YESSO, Mr Mohammed Jika invited by the bank to enlighten the IDPs on the mistake recorded that led to the “Naira rain” was boo booed and narrowly escaped lyching.

Jika told newsmen that the huge amount of money credited to some of the IDPs account by the bank was a mistake.

“It’s an IT problem from the bank and I gathered that many YESSO beneficiaries in Adamawa, Niger and Kwara states got such alerts.

“I was called and informed of the problem and I immediately alerted the bank,” Jika said.

He explained that under the YESSO programme in Adamawa the beneficiaries were entitled to four tranches of payment.

Jika said that the first tranche of N30,000 had been paid while the second tranche for transport is to be paid to only IDPs ready to leave camps to go back home.

He said the third tranche of N100,000 is for resettlement for those that went back home who were also to benefit from the final tranche of N20,000.

Effort to get the official of Yola branch of the FCMB to comment did not yield result as the branch Manager who did not give his name said they must first obtain clearance from the bank headquarters before talking to the press.

Meanwhile, policemen have beefed up security in the bank.