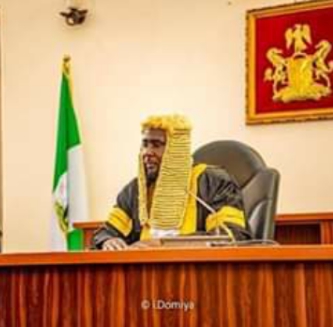 The call for the suspension was to allow a proper probe of a petition signed by 10 councillors of the local government council against the chairman, which was presented at the plenary session, Tuesday by the member representing Fufore State constituency, Shuaibu Babas.

The majority leader and member representing Jada/Mbulo State constituency, Hammantukur Yettisuri moved for the two weeks suspension of the chairman, which the house adopted for onward communication to the governor.

Details of the petition was not disclosed. However, the Periscope investigation can reveal that the aggrieved petitioners were groaning marginalisation, while the chairman conceived that the groaning could only be coined as a similitude to the proverbial dog that can only bark and not bite.

“He’s the secretary, the cashier, the procurement officer and the everything; throwing due process to the dustbin,” a councillor lamented, advancing reasons why the chairman must be brought to executive senses through legislation.

However, some indigenes of Numan interviewed by the Periscope reporter, said that even though the chairman apparently operated a one-man administration, he has brought development to the local government area.

“But you know, the transition committee responsibility is a means of compensating party political actors. The councillors will not want to be left out in benefitting from the cash cow,” a citizen said.

A critical thinker articulated that the petitioners did not take cognisance of their intercourse with negativity; the unconstitutionality of the transition committee that has made the councillorship in them.

Similarly, the Adamawa State House of Assembly has granted approval to the Executive Governor of Adamawa State Rt.Hon.Ahmadu Umaru Fintiri to appoint 40 Special Advisers in line with 1999 Constitution as amended.

The approval was sequel to the consideration of a letter to that effect forwarded to the House by the governor and read at the resumed plenary session Tuesday, by the Speaker Rt. Hon Aminu Iya Abbas.

While moving a motion for the consideration of the letter, the majority leader of the house and member representing Jada Mbulo, Hon. Hammantukur Yettisuri, appealed to colleagues to grant the approval so as to assist the Governor in running the affairs of the state.

After the approval, the Hon Speaker directed the clerk to communicate their resolution to the executive arm.