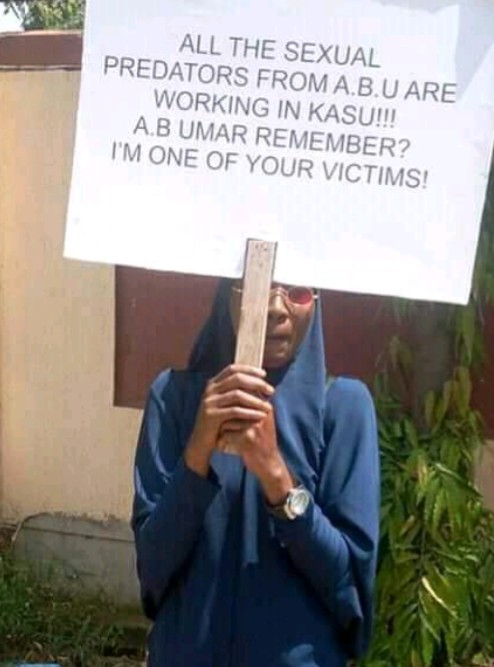 It turns out that the young lady – who was raped by a lecturer AB Umar in ABU Zaria only to be employed in KASU- who heroically staged a lone protest on the Kaduna State University campus is absolutely right in saying through her placard that “All the Sexual predators from ABU are working in KASU.” Events between yesterday and today have vindicated her and corroborated her bold assertion.

Kaduna State Governor, Nasir El-Rufai, has tweeted that the suspension of A. B Umar is only the “first step” and that 15 (yes, 15!) other lecturers who were dismissed from ABU for sexually preying on students were employed by KASU and will be investigated and eventually prosecuted.

The question is, how did this happen, and how can the authorities of KASU not have known that their institution had become a rehabilitation center for predators and outcast lecturers who should actually be in jail for their crimes?

How did 15 other lecturers sacked from ABU for sexual and ethical offenses find employment in KASU (per el-Rufai’s tweet)?

Clearly A.B Umar is not an outlier, an anomaly as the KASU authorities would have us believe (as indicated in their damage control statement from yesterday).

This is a much deeper problem of KASU turning itself into a refuge for predators from ABU. At best, they are culpable for criminal negligence.

If any of these 16 predator lecturers who were hired by KASU has sexually abused any student in KASU, that student-victim can sue KASU for complicity in the abuse– for hiring someone convicted and dismissed for a similar crime from a nearby institution and exposing her to a known sexual predator.