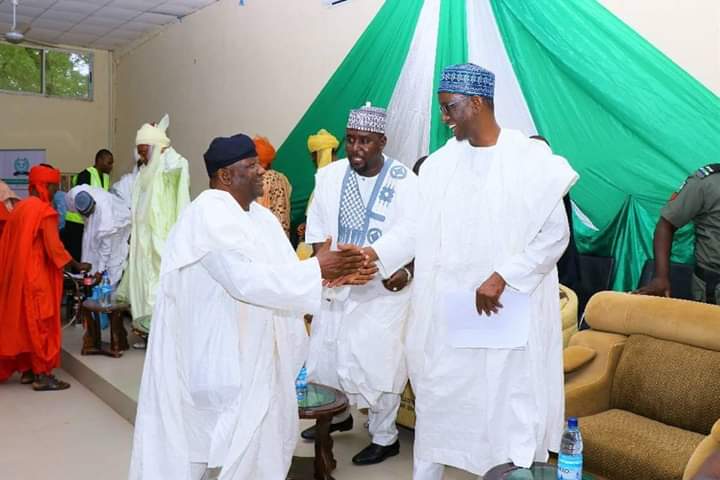 The atmosphere was weathering with encomiums and eulogies, on integrity that defined the Ribadu personalies of Nuhu Ribadu and the late Iya Abbas the speaker’s father of blessed memory

Rt. Hon Aminu Iya Abbas speaker, Adamawa State House of Assembly, has narrated how the pioneer chairman of the Economic and Financial Crimes Commission (EFCC), Malam Nuhu Ribadu, injected sanity and discipline into the anti-graft commission through transparent and accountable leadership that is unprecedented in the annals of Nigeria’s bureaucratic milieu.

Abbas who made the disclosure at the launch of the Iya Abbas memorial foundation in Yola, Saturday, noted that Ribadu was an embodiment of impeccable character, discipline, patriotism and transparency; noting that Nigeria would need the services of such rare gems to regain back its lost glory.

Abbas who was an accountant with the anti-graft body when Ribadu superintended its affairs, recalled a time when the ex-EFCC chairman alongside some staff of the commission were billed to travel outside the shores of Nigeria but somehow the trip was aborted making Ribadu to instantly return to government coffers, the travelling allowances allocated to him.

He noted that in the same vein, Ribadu directed him to retrieve such monies from others on the entourage, stating that the monies were not earned as a result of the postponement of the trip.

Abbas said such sterling attributes made Ribadu be a rare gem and a shining example of good leadership in Nigeria.

While commenting on the legacies of the late Abubakar Iya Abbas, the pioneer chairman of the EFCC, Malam Nuhu Ribadu said the late elder statesman belonged to the category of people he called “first class Nigerians”.

He said people like Iya Abbas, Abdurrahman Modibbo Girei and Danburam Jada were among the few Nigerians that have done amazingly well urging for the younger generation to emulate, celebrate and document their exploits.

“We produced some of the best people in this country, some of them are still alive. We just have to find a way of documenting their stories and continue to celebrate them.

” I think we need to do something as a community. We have to find a way of documenting them and celebrating them,” he said.

While thanking the family members for organizing such a laudable project in honour of one of the finest Nigerians, Ribadu recalled with nostalgia the legacies and past times of Iya Abbas that made him a special human being.

“Iya Abbas was special because of his relentless honesty, principle, simple and unassuming life.

“And we heard the story of the 504, which I personally know, the only one car that he had. After retirement, he went back to Uba and built a mud house. Myself and Mahmud Tukur have visited him many times in that house,” he said.

Predator Nathan the cheat-teacher Yusuf who drugged before raping to impregnate a minor, is forcefully set free on bail, by who