Adamawa Muslim Council Deployed To Play The PR To Fintiri Led Government! A Floodgate Of Reactions 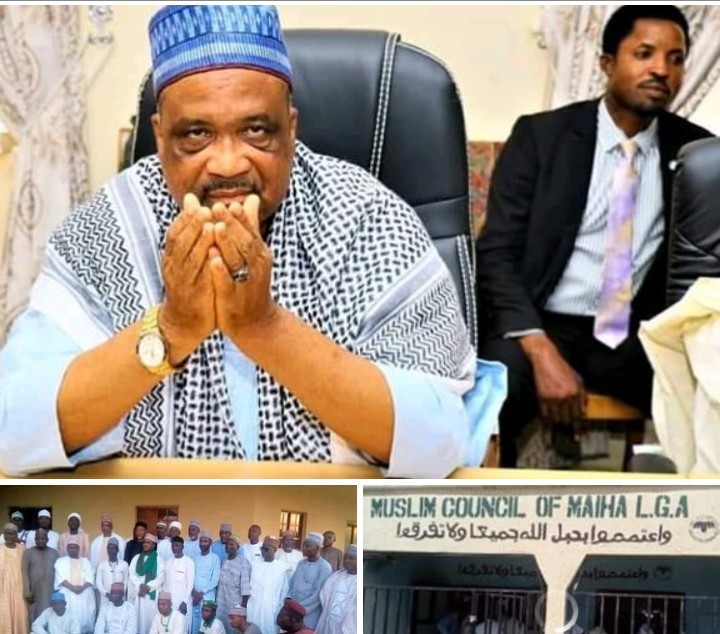 There have been floodgate of reactions to the role being played by the executive members of the Adamawa State Muslim Council, led by Alhaji Gambo Jika, considered as taking the role of the sponsored public relations firm to package the RT Hon Ahmadu Umaru Fintiri led government with religious undertone.

While some group saw it as something worthy, blending the state government with religious body, some groups conceived that the development was disastrous, distasteful and diversionary.

“There are plethora of challenges the Muslim Council ought to be seen engaged in addressing before the government of Adamawa state, rather than reduced itself to mere appendage of public relations of the government it ought to be holding accountable.

“Education is a bedrock of development, currently, over half of the public secondary school students, especially, in the rural areas, are yet to return to school because they couldn’t pay the school fees they are initially told would be free of charge. Has the Muslim Council addressed this issue in addition to the poor so-called free feeding system, some investigative media exposed?

“It is not a hidden thing that there are over 5000 state government workers whose salaries were suspended for seven months and still counting, because they are mostly Muslims as was alleged. This alarming population was observed to be a security threat should their condition not properly addressed. What has the Muslim Council done to bring this to the consciousness of the government they are facilitated to promote?

“Rape cases, especially of minors, as are being reported almost on daily basis in the state, are a source of concern. What has the Muslim Council done to address such issues?

“A sixteen-year old Fulani JSS student in Namtari, Yola south local government area for instance, was raped and impregnated by a primary school teacher after drugging her. Report has it that a court Deputy Chief Registrar, perhaps owing to pressures from some quarters, has ordered for the suspension of the court hearing and immediate release of the culprit even after having confessed to commiting the heinous crime; claiming that the minor was his girl friend whose parents, whom he has impliedly been bribing with money, food and clothing, consented to the carnal love; exposing as pimps, their daughter to prostitution. The claim the survivor’s parents denied complecency thereof. It is expected that the legal committee of the Muslim Council would be drafted to take over the case. The public are however, yet to be fed with such development.

Michika and other local government areas have been in traditional council crises relating to the district headships. It was expected that Muslim Council should have intervened, however to no avail,” the different groups of Muslims who could not understand what informed the Muslim Council to do the bidding of the deputy governor, would put as challenges begging for answers.

Muslim Council is an umbrella that brings together, by means of representation, the Islamic organisations and associations in Adamawa state with a view to regulating Islamic activities against fraud and serving as a united force in defending, strengthening and promoting Islam, Islamic activities and the unity of the Muslim Ummah.

Going by this, a group opined that “The Muslim Council shouldn’t have been alone. It should have been along with the leadership of the Christian Association of Nigeria. Or is it that the Christians in the local government areas did not vote for or do not deserve a thank you visit to be facilitated by the deputy governor?

“Or better still, if it must be, it should have been a task to be shouldered on the interfaith mediators, with a view to avoiding a situation that will be capable of exposing the Fintiri led government to a faith based attacks based on perceived sentiment.”

The Periscope tried but failed to get in touch with the Muslim Council’s leadership through the secretary and the PRO to balance the report. However, an insider revealed that some people were not comfortable that the deputy governor was going round churches “for a thank you visit on Sundays. Since it was not only the Christians that have voted for the government, the Muslim ought to be appreciated too.

The deputy governor is however a Christian. He can’t visit Mosques on Fridays to register appreciation. He therefore facilitated the Muslim Council to take the thank you to the Muslim Ummah accros the state.”

Why the Muslim Council when there are capable Muslims in the cabinet that can take the thank you mission to the mosque? This takes another report

Mohammed B Tukur posted on his Facebook wall that facilitated by the deputy governor of Adamawa state to go round the 21 local government areas, on a delegated thank you mission, the leadership of the Muslim Council started with the northern senatorial zone of the state.

“Adamawa Deputy Governor Chief Crowther Seth has facilitated a movement of Adamawa State Muslims Council under the leadership of Malam Gambo Jika round the 21 local government chapters on thank you visit and to also pray for peaceful coexistence and religious harmony in the state.

“Mallam Jika made the call when he visited Mosques in Madagali, Michika, Mubi North and Mubi South .

“Speaking on behalf Governor AUF Mallam Jika called on Muslims brothers across the various LGAs to bury their political and religious differences and join hands with current administration for development to strive in the state while building a peaceful atmosphere for the benefit of all and sundry.

“Mallam Jika also reiterated the commitment of Governor AUF led administration in ensuring security of lives and property throughout the state. He therefore called on Muslims brothers to support the current administration by shunning all vices that would bring division and led to any chaotic situation.

“The chairman also drew the attention of various Islamic scholars to always preach on the dangers of drug abuse to Muslim faithfuls more especially the youth since they are the future leaders.

“The chairman also hinted that Governor AUF has set up some administrative apparatus to deal with the menace in the state,” Tukur reported

The Muslim Council leadership are said to have proceeded to the southern senatorial zone of the state. Their “thank you for voting us” delegated kind of task, would be terminated in Yola, the central senatorial zone, an insider revealed to the Periscope reporter.

Nathan drugs, rapes, impregnates our daugther, calls us pimps, enjoys NUT support and the DCR cover to scawsh the case, setting him free – the survivor’s parents

Fashola says our roads are not as bad as being portrayed in the press, critics ask which road?