Jimeta Bridge Accident: Police officers are not chasing either truck or tricycle, there’s no death casualty – The Periscope 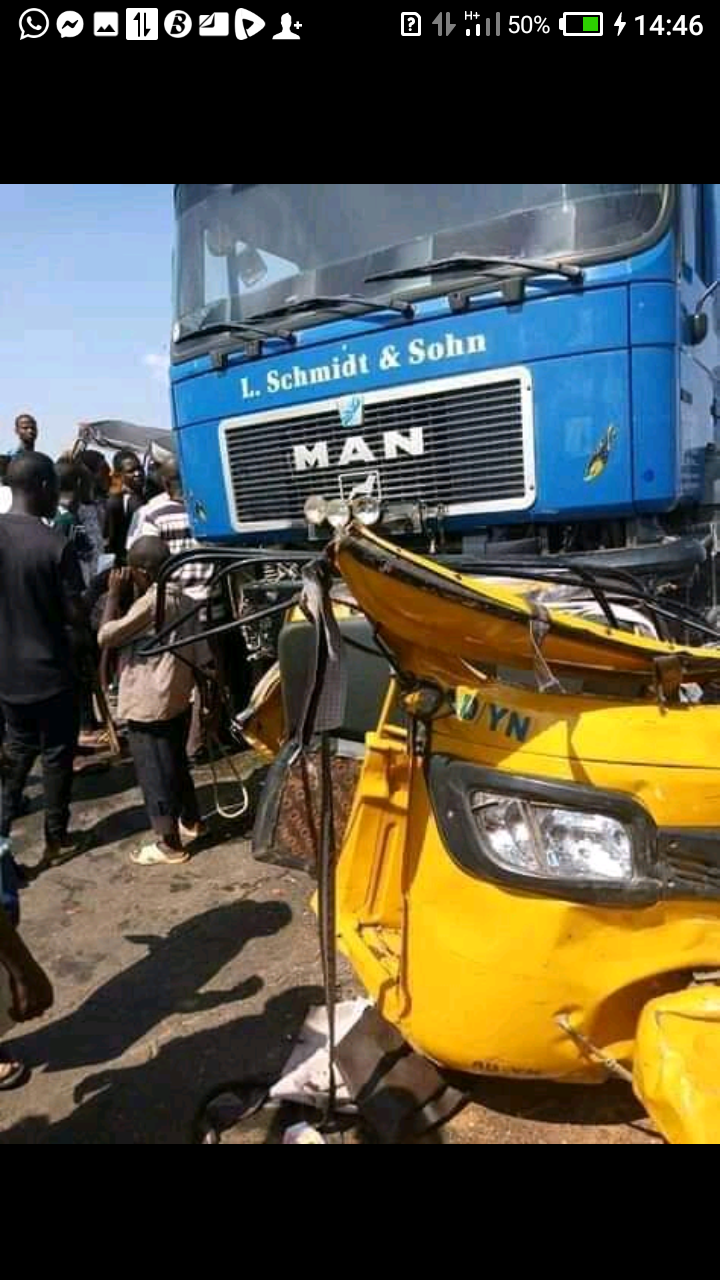 Contrary to the reports that went viral Tuesday that a trailer load of farm produce pursued by police on patrol, overran several tricycles popularly known as Keke Napep, at Vunokilang bridge (Hayin Gada) in Yola, Adamawa State and grinded 20 people before it could get to stop, the Periscope investigation can reveal that though injuries were sustained, there was however no lost of lives and that the policemen on patrol were not the cause of the accident.

Musa Mohammed the truck driver and Abubakar Ahmed the commercial tricyclists, who reported themselves on Tuesday, at the police headquarters in Yola, Adamawa State, Northeast Nigeria have revealed to the newsmen on Wednesday that they were not chased by police officers.

Authorities at the State Specialists Hospital in Jimeta and FMC Yola confirmed that there was no corpse deposited at the mortuaries resulting from the Vunokilang bridge accident. The health facilities did not also record death casualties, as patients were responding to treatment. Some of the injured casualties were even treated as outpatients.

The were two versions to the incident generated out of rumour:

One version has it that policemen have mounted an illegal checkpoint just before the Jimeta Bridge crossing River Benue. A commercial tricyclist suspected to be carrying a bag of foreign rice was stopped with his passenger for questioning.

Other commercial tricyclists who could be guilty of not having updated papers, thought they would be prey to the predator policemen and have therefore decided to stop keeping a distance. Their growing number has contributed in causing the gridlock. An approching trailer load of local goods was without break. It painfully feasted on the tricycles that have caused the traffic commotion before it could get to a stop.

The other version has it that the accident was caused by police officers, who were chasing a truck driver for refusing to give them money as bribe for the suspected foreign rice he was taking to town, perhaps from Cameroon. How was he able to bid custom officers, the narration was limited of the explanation.

Abubakar Ahmed the commercial tricyclist told the press that his tricycle developed a problem while conveying a lady-passenger with her bag of locally processed rice. Policemen on patrol simply came to rescue the situation. Their presence seemed to him to be a discomfort to other tricyclists who decided to stop, keeping a distance away, causing traffic.

Corroborating, Musa Mohammed the truck driver said he lost control of his break while approaching the bridge. There were tricycles that stopped on the highway he did not know the reason. He managed not to hit them along with some vehicles but he could not help it.

Both the tricyclist and the truck driver said that though injuries were sustained, they were not aware of any death casualty.

“After the incident, we reported ourselves to the security,” the duo said.

It was also for their safety, owing to the difficult to control over emotion of the aggressively aggrieved, which led to the near lynching of uniformed officers who have no connection to the incident on the highway,

Rabiyatu Idris and Fauziyya Adamu were, among the five accident victims receiving treatment at the Federal Medical Centre FMC Yola. They said that they were initially taken to the State Specialists Hospital in Jimeta. They could however not be accommodated due to the condition resulting from space constraints, they were told, hence were transferred to FMC Yola.

“We heard the commercial tricyclists saying that policemen have mounted a roadblock. They stopped to see what would happen with their colleague the tricyclist before moving on.

“Then suddenly, we heard people shouting ‘trailer, trailer!’ we tried to jump out from the tricycles we joined,” they explained.

One of the tricycle passengers said she was on admission not because of the crushing truck but another tricycle that was escaping from being touched by the uncontrolled, break-losened truck.

The spokesperson for FMC Yola revealed that fifteen accident victims were taken to hospital.

“Some of the victims have no complications to warrant admission. They are being treated and are sent back home. At the moment, there are only five of the accident victims that are being managed and you can see that they are responding to treatment impressively,” he said.

Confirming the insident, the Police Public Relations Officer of the Adamawa Police Command, DSP Suleiman Yahya Nguroje, told the Periscope reporter Tuesday in Yola that there was no record of death casualty resulting from the incident as was insinuated yesterday.

“The social media handlers should be of good conscience not to be like niggers without attitude, fictionalising serous situation with hyperbol that could truncate violence.

“The gentlemen of the press; the respected fourth estate of government, should be professionally responsible. They should not be sitting in their comfort zones miles away from the scene of the incident to be reporting what is not factual.

I’m not bothered with the use of language that calls for further training. Look at what an online- could I call him a reporter- wrote on the incident where he concluded that, I quote: “Newsmen made several attempts to get Othman Abubakar, the Police Public Relations Officer in Adamawa to speak but his phone was switched off at the time of this report,” end of quote.

“I’m not Othman Abubakar, for God’s sake, I’m the Police Public Relations Officer. My name is Suleiman Yahya Nguroje. I don’t think this guy even has my number.

“The public should also learn to say that which they are only aware of and they can confirm, rather than being over emotional, which could result to taking law into their hands.

“Police shouldn’t be seen as public enemy to be given a bad name like a dog to hang it.” DSP Nguroje gave thses advice, in his contribution to the Periscope conversion.

Who abducts Premium times regional editor? For what