The National Postgraduate Medical College of Nigeria NPMCN, has stated that the Federal Medical Centre FMC Yola, Adamawa state, Northeast Nigeria, has the human and equipment capacity for postgraduate medical training in its medical laboratory departments.

The NPMCN’s accreditation panel led by Prof Abbiyesuku Fayeofori Mpakaboari the Chairman Faculty Board of Pathology, revealed this to the management of FMC Yola at the end of the accreditation exercise, which lasted for two days; from Thursday 14 to Friday 15 of November, 2019. 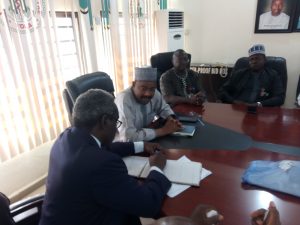 The hospital was relocated to its present site in Yola South local government, covering parts of college of nursing and midwifery and technical college, in 2006.

Healthcare delivery services was started at the new site with 175 beds, which gradually and steadily improved to its current size of a 363 bed capacity and still counting, with the availability of space, possibility of progress and prayer for political will.

Prof Auwal said the health facility has benefitted from philanthropic interventions, such as the purposely built and fully equipped new maternity complex donated by Her Excellency Dr Aisha Muhammadu Buhari the first lady, among other facility interventions by organisations and prominent personalities.

FMC Yola also run post basic nursing programmes. It has started with the postgraduate perioperative nursing, having gained the accreditation to run the programme by the Nursing and Midwifery Council of Nigeria, making it the first and only Federal Medical Centre in Nigeria to run the programme and the only second in the entire northern states after University of Maiduguri Teaching Hospital UMTH.

Prof. Auwal said that plans were underway to establish postgraduate nursing in accident and emergency and Burns and plastic, among others. 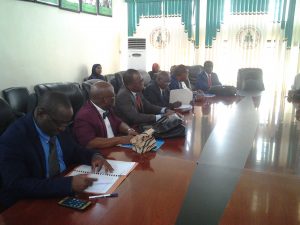 Prof. Abbiyesuku the chairman of the panel, while presenting the report of findings to the management of the hospital, revealed that the essence of the accreditation exercise was for residency training and everything tied to it, such as ensureling quality control; the question of standard having have to be maintained in the entire medical laboratory service windows and that the structures in place were beffitting for postgraduate students.

It is important, Prof. Abbiyesuku would say, for people to concieve the visitation for the accreditation and the entire activities around it, as an improvement in efficiency and effectiveness of leadership, professionalism, training ability and service delivery, for which the entire members of NPMCN accreditation panel were not in anyway disappointed with FMC Yola.

Everything about FMC Yola is exceptional – The panel

The panel commended FMC Yola for the general cleanliness and landscaping, considered as beyond comparison with other hospitas visited for similar exercise.

There was the industrial harmony between staff and management of the hospital. The philosophy of teamwork that guided the activities in the health facility was beyond comment.

This was observed to be owing to the commitment, critical thinking ability and integrity of the medical director Prof Auwal, whose guiding philosophy is success to the medical centre for which the staff of the Centre and the state in general, should be grateful for having he who dedicated himself to selfless service as a chief executive of the health facility.

The panel was highly impressed with the facility upgrade and the staff capacity development in the medical laboratory departments, reflective of the entire hospitals; Staff are sent for undergraduate studies and postgraduate programmes, among other training needs and motivational initiatives.

The information and communication within the Centre were highly commended; there was adequate use of noticeboard. Informations are placed everywhere. The signposts guiding the first timer patients, showing directions to get to the next service point from the initial service point without much Ado, was simply encouraging. There was however, the neat for the internet service to be upgraded to cover the entire health facility.

There was adequate water supply and constant electricity in the hospital. This was dues to the fact that there were generators strategically placed to cover the entire hospital. These were complmented with the use of inverters for solar energy.

The side lab, referred to postgraduate medical laboratory, occupied by the resident doctors was considered as commendable initiative.

Histopathology Department was presented with a Professor, four consultants and resident doctors; the equipment on ground put together were sufficient for postgraduate training.

The panel was impressed that the building of an upgraded histopathology complex was ongoing. It would also be fully furnished and equipped as much as they were impressed that the entire medical laboratory departments would have their individual complex.

Haematology Department was not only like others in terms of staff efficiency and professionalism, neatness and the medical equipment, the test menu was okay and the record keeping was so meticulous, neat and up-to-date excellent.

The Microbiology, Parasitology and Immunology Departments have equally exhibited their strengths, capacities and capabilities not only of having a lab result reliability but also of running residency training adequately.

Having thanked the members staff of FMC Yola for their cooperation
and the management of the hospital for the non-interference in the screening exercise, the panel concluded that the level of ultimation in FMC Yola was rare in the country.

In his vote of thanks, Prof Auwal commended the NPMCN’s accreditation panel for a thorough and well done job, assuring that all that were noted as recommendations, would be looked into for implementation.

Dr. Amina Shattima Shuwaram Consultant Medical Microbiologist and head of department Medical Microbiology FMC Yola, was the coordinator for the accreditation exercise. She said the management of the health facility and the entire laboratory departments were well prepared and fully set for the exercise, which turned out never to be a disappointment with their laugh, eventually, coming out last.