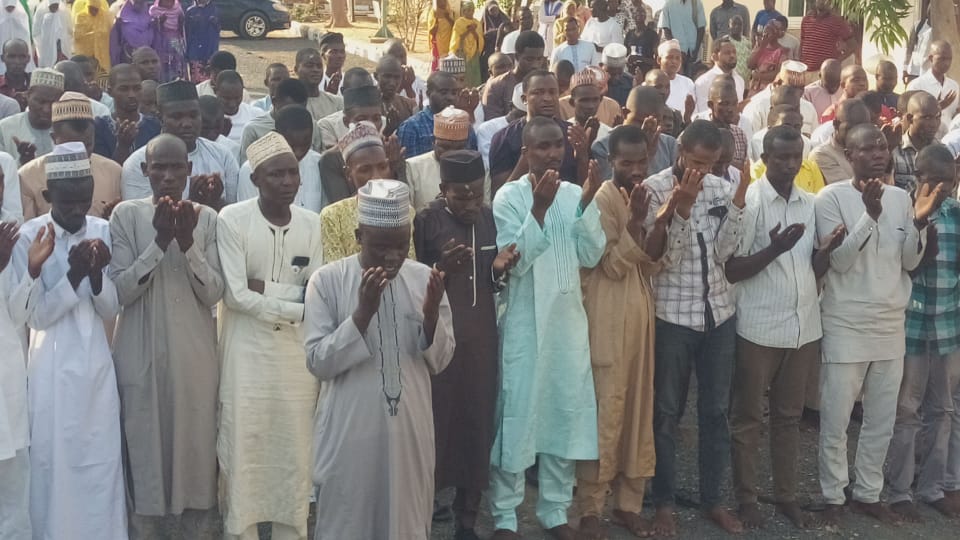 * It’s not all about Muslims, there’re Christians; Kumangar, Edgar, are like us but are carried along, why?

The over three 3,000 workers, representing different demographic categories; age, gender, ethnicity and religion; the pregnant women, some coming from a distant rural areas, cut accros the local government areas of the state, with their starving looking children, some of whom have even swore that they did not vote for either President Muhammadu Buhari or former Governor Muhammadu Umaru Jibrilla Bindow of Adamawa, under whose leadership they were said to be employed, marched in mourning to Lelewal motel’s premises, carrying placards with different inscriptions, largely emancipatory, liberationist “demand for salary pay and reinstatement” and in solidarity, singing redemption songs with lamentations; “pay us our salaries. “We are suffering, some of our people are dead.”

“Nigerians, please come to our aid, we’re poverty strikingly sick and dying. Our salary is suspended for seven months and still counting.

“Our hungry children can’t go to, because we can’t pay school fees under a government that claims to run free education though school fees are charged.”

Motorists and pedestrians slowed as the unaggressive, aggrieved unpaid workers, peacefully walked out from the venue where they held both Christian and Muslim prayers for several hours; the shortchanged surrendering their fate faithfully to His Magesty, the most Compassionate and most Merciful, who decides the leadership and followership relationship based on sympathy and empathy, care and concern, peace and patience, equity and justice, for divine intervention, against what seemed to be to them, a disgusting design, which a citizen explained to have attracted an unprecedented public sympathy.

The protesters claimed that their seven months salaries were suspended and their employment would be terminated for no explanatory reason. If retrenchment because the government could not pay minimum wage, they were not given any form of severance entitlement or allowance till date.

“Many of us cannot pay our children school fees, we cannot pay house rents, electricity bills, no running tap water and so we can’t pay water vendors, we can’t even go to market and buy what to eat; we are suffering and our predicament does not affect or concern those in government at all; they don’t care.

“When Fintiri was campaigning for our welfare, we supported him against the man that gave us employment but now that they are to pay us, they abandon us and they are there cooling in their air conditioned offices. Many of our colleagues are dead, both young and old, due to lack of funds,” cross section of the unpaid workers commented.

Responding to the institution that what informed the salary suspension and stand-down exercise was largely due to the one sidedness of the Bindow employments based on faith, the unpaid workers told the Periscope reporter that it was statistically incorrect.

“It’s a kind of giving a dog a bad name to hang it. Be sincere now that you’re here. Are these population of people only Muslims? Is it only Muslim prayers that was observed?

“It’s not all about Muslims, Christians are also employed. Take for instance Solomon Kumangar the governor’s media aid. Wasn’t he from ATV Yola before being redeployed to the state library board as he requested, to serve as director.

You see, what the lack of due process politically claimed to have affected us, has equally affected them, yet the duo and many others, are carried along in this government, how fair is it?

“People should know that there’re more Muslims than Christians in Adamawa state. Suffices to say that, there can never be any justice when your statistics for employment statistics has no consideration of the faith based rationing,” one of the aggrieved unpaid salary explained.

On the issue of SPY scandal, the aggrieved unpaid workers argued that it was a mere conspiracy aimed at pleasing certain lobbyist group, lacking the critical spirit within the agitational form, bred by sentiment.

“What’s the essence of sacking SPY workers because they’re for the most part Muslims and ignoring the employment imbalance based on faith in ADSU Mubi where a Christian employed by the same former Governor Bindow, is heading among other tertiary institutions of learning?

The unpaid workers said they have gathered that about 800 workers would be relieved of their appointments in SPY. Other places would have about 8000 workers to be relieved. “If you think that it’s an exaggeration, wait and see the sacking with impunity anytime soon,” they said.

The Fintiri supporters argued that the protest prayer by the unpaid salary workers against Fintiri led government, was immaterial and ineffective. If anything, it would be back to sender as the governor was covered by the blessings of his achievements.

“No individual or group fights a government and succeed. Employments that are not merited on due process must be reviewed. Let the affected keep on with their prayers, it’ll not have any effect on this administration

“Let the unpaid pray, It can’t affect Fintiri led government. If such prayers are answered, Governor El-Rufai of Kaduna couldn’t have made it to the second tenure, a Fintiri supporter observed.

“Ours is to commit our fate faithfully to our Creator and not to trade words on whether or not Allah SWT answers prayers especially, of the shortchanged. This is just the beginning. Our commitment to the struggle and continued prayers is never relenting.

“We’re been motivated by the moral story of David and Goliath as revealed in revealed scriptures for an analogy, the unpaid salary protestor said.