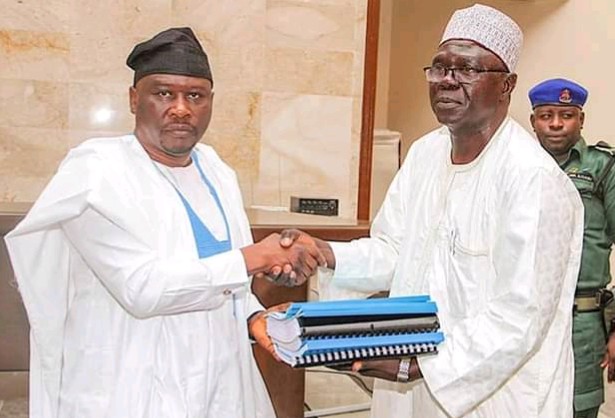 Governor Ahmadu Umaru Fintiri has directed State Head of Civil Service Doctor Edgar Amos Sunday, to kick start the process for the recruitment of two thousand teachers in to Post Primary Schools Managed Board PPSMB in the first quarter of the year 2020.

Fintiri gave the directive when he received final report of the committee for Regularization of Appointments and Transfer of Service in the State Civil Service from May 2015 to May 2019 held in the Conference Hall, Government House, Yola on Thursday.

Fintiri said his government has included some amount of money in the 2020 budget for the recruitment and that was why he partially lifted embargo on employment to meet up with the needs of man power in some ministries, departments and agencies of government.

Fintiri stressed that his administration was keen in getting the state civil service out of the maze.

Fintiri has commended the members of the committee for the steadfastness and patriotism exhibited in carrying out the assignment successfully, fearlessly and objectively.

Fintiri said very soon he would constitute a committee that would come up with a white paper for the review of the recommendations of the committee towards full implementation.

Earlier in his remark, the Chairman of the Committee on Regularization of Appointments and Transfer of Service in the State Civil Service from May 2015 to May 2020, Mr Emmanuel Ibrahim said the committee during its assignment had visited ministries, departments and agencies to compile the report.

Mr Ibrahim who is a Permanent Secretary Administration in the office of the Secretary to the State Government SSG, revealed that a total of seven thousand, five hundred and ninety nine persons were employed in the year under review.

He added that of the total, four thousand, two hundred and nineteen persons were employed based on due process and recommended for state government to sustain them for the interest of the civil service.

The Chairman further disclosed that the remaining three thousand, three hundred and eighty persons were not recruited based on due process as the recruitment agencies have compromised their responsibilities and advised government to review the recruitment.

Ibrahim said the committee observed that due process was tempered with in issuing some waivers in the recruitment and expressed the committee’s worry third class graduates were recruited for lecturing at the Adamawa State Polytechnic SPY Yola.

He applauded Governor Umaru Fintiri for a partial lift of embargo on employment in the state, which has been neglected by previous administrations and hoped that the state government would soon implement the recommendations of the committee for the benefit of civil service and the state at large.

Some critics are however not comfortable with governor Fintiri saying that he has partially lifted embargo on employment when non of the previous government imposed employment embargo.