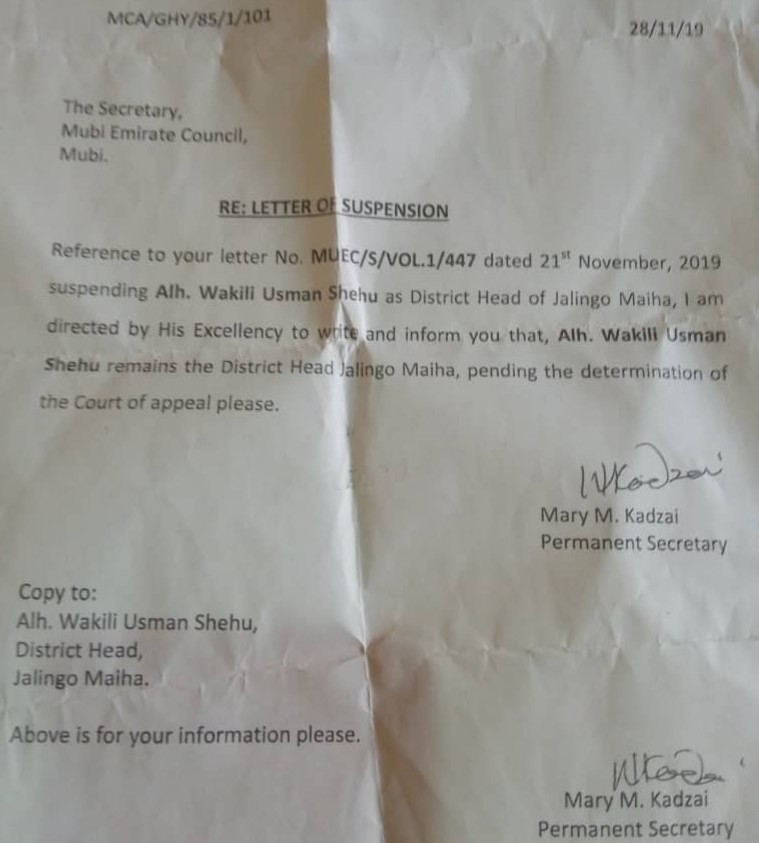 The faithful in Jalingo-Maiha metaphorically went hypertensive with the news, some days previously that Idi was being given executive approval for the continued desecration of worshipping places, tyranny in the palace against aristocratic order and anarchy to peace loving, peace-living community whatevers fetish thugs and talismanic gloves.

The news has it that a letter lifting the suspension by reinstating Wakili Usman Shehu Idi as the District Head was summarily acting on the directive of Governor Ahmadu Umaru Fintiri of Adamawa State who later realised that the action taken by the former governor Bindow followed due process and that he would do to his utmost in either continued adjournments and/or appealing to the appeal court juries to give a final no further verdict in favour of Idi the impostor.

The Periscope’s previous publication articulated that “the letter dated 4th December 2019, which redirected Wakili Usman Shehu known as Idi to keep acting as a district head of Jalingo-Maiha pending the determination of the court of appeal, has nullified the earlier letter dated 25th November, 2019, which not only forbade Idi from parading himself as District Head, has equally banished him from Maiha, he was trying to cause dissention for anarchy that he was challenged before the law against, pending the state government investigation on the legitimacy or otherwise of the selection process that ushered the impostor- against the court order- into the tussle for the stool.

“The group queried the state ministry of local government and chieftaincy affairs and the Mubi emirate council, alleged to have joined in romance with the contempt of court order- without stay of execution- of July 13, 2018 that restrained Idi from parading himself as any district head and directed the governor of Adamawa State to approve the appointment of Mahmud Abubakar Suleiman as the legitimate District Head of Jalingo-Maiha.”

An informant close to the Mubi Emirate Council has however revealed to the Periscope reporter that the Emirate Council only acted on the directive of the governor through the state ministry of local government and chieftaincy affairs.

However the Periscope investigation can reveal that Mary M. Kadzai the Permanent Secretary chieftaincy affairs only robbed governor Fintiri’s taste, beating even the SSG, to chew the unpalatable onion for offensive utterances by arbitrarily, though could not be without financial inducement, issuing a letter that only directed the Secretary not the Emir of Mubi and Council members, to have Idi the anarchist impostor back to the appointment that was coercively approved to him by Bindow using his position as the chief executive of the state and that which was challenged before the court of law.

The content indicated that the letter was sequel to the order from “His Excellency” without mentioning the specific Excellency; President, Governor- or simply a Ghost?

The letter from the permanent secretary, addressed to the Secretary Mubi Emirate Council, dated 28 September, 2019, copied to Idi read thus:

“RE- LETTER OF SUSPENSION
Reference to your letter No. MUEC/S/VOL1/447 dated 21st. November, 2019 suspending Alh. Wakili Usman Shehu as District Head of Jalingo-Maiha, I am directed by His Excellency to write and inform you that, Alh. Wakili Usman Shehu remains the District Head Jalingo-Maiha, Pending the determination of the court of appeal please.”

A source close to the SSG Adamawa State revealed to The Periscope reporter that the SSG has challenged the authority of the letter that gave Idi who is on bail, the permission to go to Maiha he has since been banned from, when he invited Kadzai the Perm Sec to his office.

Kadzai was told to communicate to Idi to leave Maiha immediately. The communication didn’t have to follow through the Mubi Emirate Council, because the reinstatement letter was a fantastic fraud and an insubordination.

A source close to Kadzai disclosed that the Perm Sec has only few weeks left to retire from service with the state government. She needed money to start a pre-retirement plan.

She was lured into the act of insubordination, the source said, by the interim Maiha LG chairman who equally has but few days left to leave office. He would not want to handover the office to any to be elected LG chairman without presenting a Toyota Starlet to Idi in accomplishment of the mission of their shared political mentor.

The vehicle was meant for the district head of Jalingo-Maiha and the Perm Sec gratification induced initiated letter has provided the accomplishment cheers without tears.

Another version has it that the development was occasioned by the Pakka cabal protest.

“You see, Juta has a long political history with though, no developmental impact in Maiha LGA. He wants to remain a political compass to determine who is elected and who is appointed into what office.

“He brought Kwashasha and was said to be instrumental in having PDP ticket for LG chairmanship election to be surrendered to IDi Amin based on executive arrangements; consultations, negotiations.

“Both Kwashasha and Idi Amin are from Pakka along with their master. Don’t ask me why should the people of Pakka district negatively involve themselves in the scandal of the monarchy in Jalingo-Maiha District. They have a long standing agenda.

“Kwashasha with his political landlord are not comfortable with the new PDP arrangement in Maiha LGA. Therefore, they thought to conspire against governor Fintiri and PDP to be unpopular in Maiha, for a humiliating defeat.

“The conceived arrangement that Alh. Tijjani Maksha, having defected to PDP from ADC, is penciled in to take over the PDP chairmanship in Maiha. This can neutralise the Pakka cabalistic hold.

“The Perm Sec chieftaincy affairs was a good window the cabals found easy to penetrate,” a political informant said.

Thanks to the intervention of SSG, it was a peaceful Friday in Jalingo-Maiha, the central mosque would not be desecrated by a talismanic impostor with fetish thugs as his Mosque going faithful. The Jumua’t prayer was peacefully observed without any suffocating air about impostor.

The question that is remained to be asked is, where is the Toyota Starlet meant for the legitimate District Head but surrendered to the impostor, by the by the former interim LG chairman just before the swearing-in of Idi Amin the present LGA chairman?

The concern indigenes of Jalingo-Maiha are however planning to pay a visit to the ministry of local government and chieftaincy affairs to congratulate the newly appointed commissioner and to ask the permanent secretary chieftaincy affairs to return the Toyota Starlet meant for the legitimate district head of Jalingo-Maiha District for initiating a letter that would result in stealing a Starlet by cabalistic conspirators.

TARABA: Garba, From A Security Guard To A Lecturer