The Scope, others take FMC Yola hate speech as theology to evangelise (I) 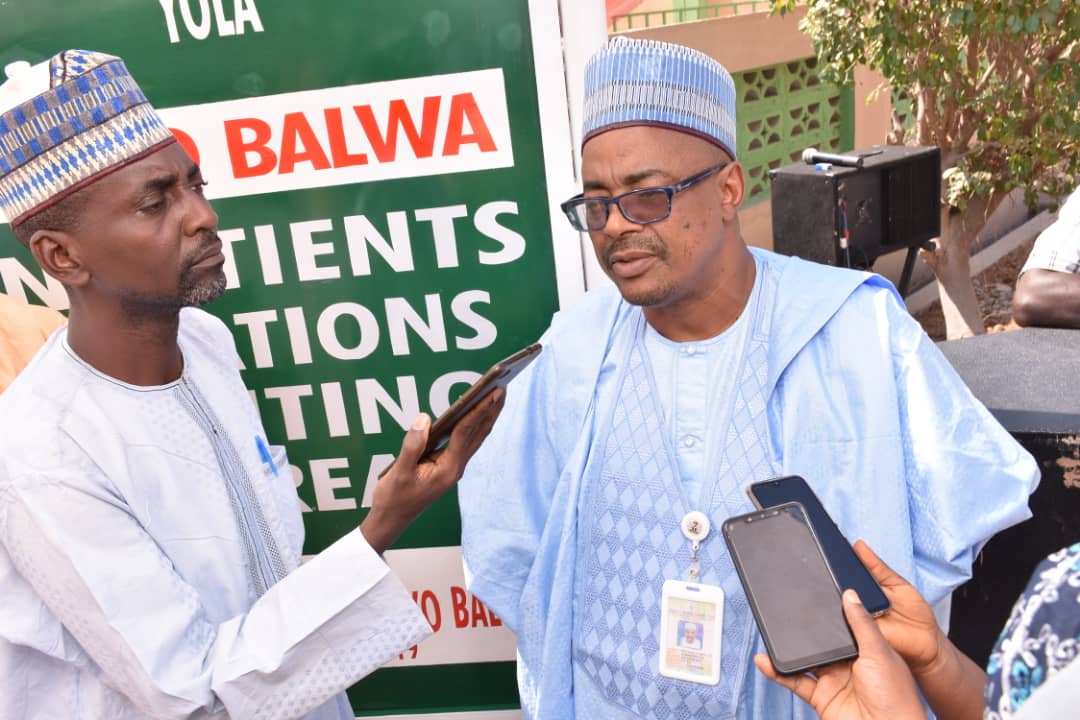 A reporter with the Scope – Adamawa state government newspaper – where I served as a freelancer in defence of my state against complacency to insurgency as a conspiracy, siding with the former governor Nyako, Tukur or so he said his name was, sought to know the miracle behind the success of FMC Yola as much as Amina the correspondent with AMINIA – Hausa version of the Trust newspaper – would want to have a profile kind of personality interview with the Medical Director FMC Yola Prof Auwal Mohammed Abubakar, the achiever whose name is written somewhere in silver, somewhere in diamond and somewhere in gold, with so numerous to mention categories of awards, for upgrading the standard of healthcare delivery service and the status of FMC Yola to a postgraduate training facility.

Thursday, December 12, 2019 was incidentally, to bring the two local and the national journalists along with others together, to grace the commissioning ceremony of the Patient Relatives Waiting Area that was built by a philanthropist Alh Mohammed Aminu Umar Mayo-Balwa, as a donation to FMC Yola for the benefit of those coming from other countries, states and local government areas as patient-relatives.

It was indeed a community service as a social responsibility rendered by a philanthropist who is an indigene of Adamawa state that was impressed by similar philanthropic gesture, when he visited his patient receiving treatment in the health facility, the information and media relations unit advised the management of the Centre that it would be brilliant if the commissioning could have a media blessing, with a view to encouraging other teeming philanthropic hearted for similar interventions.

When it was time for the interview with the philanthropist the donor and the management of the hospital, just after the commissioning, on why the donation, Who would be the beneficiaries and how the donated facility would be properly managed, the Scope’s Tukur craftily threw a question that could technically count for digression but that which was satisfactorily answered by the MD FMC Yola, shamelessly followed the head of information and media relations to his office for a beggarly brown envelope before leaving; Of course! You can be sure that the head public pelations and media mediation of the hospital, was generous.

The question was the only reason Tukur visited FMC Yola for the commissioning ceremony of the project that neither him nor the Scope management seemed to be happy with because they are alleged to have disliked the idea of establishing a teaching hospital and the medical college in Adamawa state, which their employer; the state government, represented by the state governor, aggressively, or to lend from HE former Vice President Atiku Abubakar the Waziri Adamawa, “fanatically,” supported by leading the stakeholders in the state beyond party politics, to present the demand before President Muhammadu Buhari, in Aso Rock.

HE Atiku Abubakar was the first victim of vindictive journalism without a cause, crudely embarked upon by Patrick Anyom and Stanley Mejah, using the scope for campaign of calumny, when the then Turaki of Adamawa contested for governorship seat with Mr. Bala Takaya. You can the guess reason even without being a critical thinker.

The commissioning ceremony was commended. The online media were at the vanguard; Thanks to the Periscope Global and the Fombina Times. The news of the event by ABC Yola and Pulaaku FM radio, both the English and vernacular versions were excellent, in addition to other reports on the occasion. Gotel Communications took the lead in terms of the television aspect of the news. NAN has acknowledged the worthiness of the report as well. These were without any prompting for the promotion; developmental journalism, not beggarly at all.

The Scope did not report the commissioning ceremony. The paper went thick into the valley of the shadow of  lack of professionalism, misled other quarks in the pen profession with campaign of calumny; Philibus Jonathan also another yet fully baked, working with the Scope but also operates a social media platform, and George Kushi the most unprofessional media aid to the deputy governor, amplified it via social media with the captions:

Was it the issue for the commissioning ceremony?

If you can give answer to why some tribesmen, arrogating to themselves the voice of community, agitated for a change of the name of Modibbo Adama University of Technology MAUTech, Yola because of the Fulani air about the name as I have articulated in my previous widely shared piece, with the caption: “TO CHANGE THE NAME OF MAUTECH, YOU HAVE TO CHANGE ADAMAWA AS THE NAME OF YOUR STATE,” you can have the answer to the above question.

The Scope’s Tukur asked the MD FMC Yola why the price increase in the hospital service?

Instead of the Scope to report the response of the MD to the question. The paper crudely concluded with neither introduction nor body that Prof Auwal denied that there was a hike in the hospital service fees; “saying that the hospital rendered the cheapest services.”

The report lamented that “patients are now at the mercy of God due to exorbitant charges being demanded by the hospital seeking for medical services.”

Is it only now that patients are at God’s mercy? Isn’t it heretic? We are all and always at God’s mercy in whatever condition, whether as patients in the hospital or as peaceful, healthy people waxing stronger, walking and working with ease.

Besides, the hospital is always full to “over” capacity. One would expect a ghost or empty hospital. So how unaffordable are the services and/or how unserious are the hospital staff?

The report further has it that the clients “noted with dismay the situation where the FMC Yola has only one pay point, which makes them to face a lot of difficulties on the process and called on the relevant authorities to come to their rescue.”

Only one pay point! Has this fictional elaborator cared to find out the authenticity of the claim of their seeming imaginatively created patients and relatives? Why did Tukur the Scope reporter not throw this allegation to MD FMC Yola for verification? What’s the hidden agenda of the conspirators he seemed to be serving as moronic agent?

There are pay points at accident and emergency, GOPD, laboratory department and at entrance to the main theater for the inpatients among others. Wherever one decides to pay, serves the same purpose. These are visible.

The report further claimed that “according to the patients and relatives, the charges would deny ordinary man access to healthcare being rendered in FMC Yola.”

MD FMC Yola revealed to Tukur the Scope reporter that there was no indigent patient, the Scope’s “ordinary man” that was ever sent away for lack of money.

“As you’ve heard from the chairman of the occasion, we have a Hospital Paupers Fund he was chairing that pays the hospital bills of the helpless poor, this include major surgeries,” Prof Auwal responded.

Why did the Scope ignore the MD’s response?

MD FMC Yola has explained that “the hospital operates on revolving fund.” The hospital would definitely close down when if it should operate based on subsidy services.

How do you expect the hospital to function effectively and efficiently when patients are to pay less than the cost of items procured by the hospital, is it not illogical; kind of illusionary economy rather than visionary? Only the Scope led by Anyom, Mejah and their other genetic conspirators Kushi and Philibus with their agent-reporter with weak a gene of his tribe Tukur, have the kind of economic damning theory.

Yes! MD has said that FMC Yola offers the cheapest healthcare service delivery. It is expected that the scope should verify from other medical centres and teaching hospitals even within the country. It is however never an investigative medium of information dissemination, other than a window for spreading rumour aimed at anarchy.

Why did the Scope reporter Tukur and editors Anyom and Mejah, Jonathan Philibus who was my student at MAUTech Yola and George Kushi the press secretary to the deputy governor Adamawa state ignore the full interview granted to MD FMC Yola?

Patrick Anyom a Tiv from Benue is married to the Bwatiye the tribe Stanley Mejah shared kinship with. The duo were among the campaign of calumny between late 1999 and early years of 2000, who took to Fulani hate speech as a theology to evangelise in the pages of the Scope newspaper, by defining Federal College of Education Yola as Fulani College of Education and Federal Medical Centre Yola as Fulani Medical Centre; a ridiculous metaphor, suggesting that the institutions were dominated by Fulani and/or Muslims, when in actual sense, the Fulani and/or the Muslims constituted less than 20% in terms of employments, appointments and admission going by the statistical findings of late Barrister Yusuf Aliyu led committee published in the Trust newspaper.

Suleiman Maisaje of blessed memory, my school mate, professional ally and friend, was the information officer FCE Yola. He handled the Scope conspirators with hit backs for which my friendly service was deployed undercover. I know them.

The same duo, were in the middle years of 2000, challenged by the Centre for Islamic Thought CIT Yola, for publishing a seeming fictional story of a lady who poured out libel against Muslims in the likes of her father and Islam the religion her father professed as a disaster that led her to abandon the faith.

What CIT sought to know then and that which neither Patrick Anyom nor Stanley Mejah could even attempt to answer, was whether or not a government owned media in a multi religious society has any ground for religious hate speech.

Acting on the Bwatiye script against the establishment of teaching hospital, medical college and immortalising Modibbo Adama because he is a Fulani hero, simply put, is what informed the baseless report on FMC Yola, where another Fulani is never to be distracted until success is accomplished.

One wonders if the deputy governor would commend FMC Yola for effective and efficient, patient-care service delivery, who is a press secretary to say otherwise, other than a serial unqualified for the appointed job?

When I went through Kushi George’s Facebook page for his version of calumny, those who responded to him have given me a critical idea about their agenda.