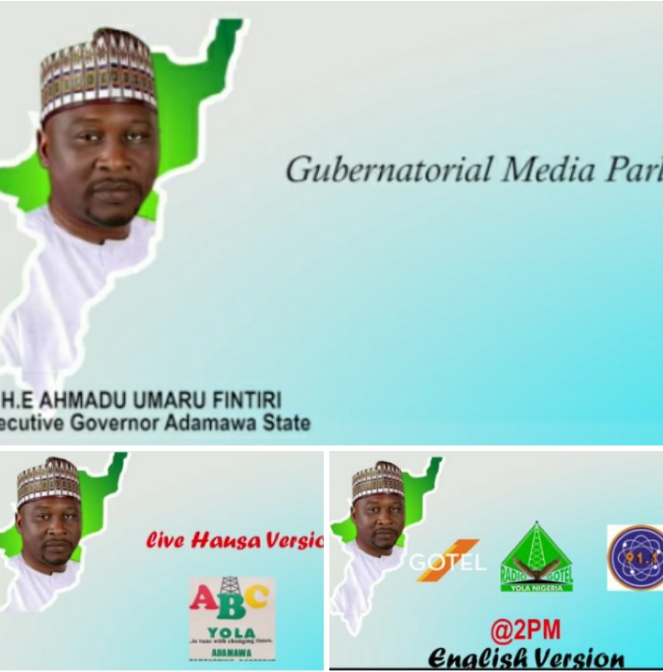 The Periscope’s summary of Fintiri’s revealed achievements from promises made, for a fact check:

* First among the first time governors to conduct LG elections, successfully too

* To employ 2000 teachers in addition to employments in health sector

* Sends 500,000 out of school children back to school, clearing the street off Almajiri beggars to instill sanity and security

* Technically denies that registration fees are collected from students

* To pay WAEC, NECO and scholarship

* To enact a free education law

Governor Fintiri disclosed this Tuesday, in a gubernatorial media parleys on ABC’s Tabakidi Taba Karatu; a Hausa live programme and the English version on Gotel Communications TV, Radio AM and FM stations

Fintiri revealed that his government inherited N115b loan and has been servicing the loan with a little above N1b every month.

Part of the loans, Fintiri said, was owing to the N3.2b bank overdraft collected every month to pay salaries.

To be able to discontinue plunging the state into the debris of debt after a debrief, the concepts of prudence and accountability were deployed, Fintiri explained.

No greed, no diversion of public fund to private purse, no intervention or invitation extended to the cinematic nanayes invasion to colonise the state treasury with blackmail.

“We have to cut cost to be able to pay salaries without necessarily seeking for bank overdraft. We’ve been doing so, successfully too, since we assumed office in May, 2019,” Fintiri said.

According to Fintiri, prudence was the secret behind the ability of the government he led, to be able to pay N32, 000 minimum wage and as early as 23rd to 24th day of every month.

Strategic planning was added to the variables joined in getting the local government authorities out of the maze.

LGA could settle the salaries without any stress; local government workers, traditional institutions and workers with the primary health care and primary schools in addition to initiating capital projects.

“There was no local government administration and management system. It’s illogical and unconstitutional to entrust public resources in the hands of those who were not decided upon by the community, now that local governments are independent of the state. Based on this, I constituted tasted and trusted local government caretaker committees, which run for six months before the LG elections.

“Check it out, I’m the only first term governor that has conducted successful local government elections,” Fintiri challenged.

Fintiri was equally commended for the roads contract he awarded. He prayed for patience assuring these were only but tip of the iceberg.

On the woes of the Bindow employed, unpaid workers who were eventually disengaged from service without any entitlement, Fintiri said there would be indirect jobs for them. Skills acquisition schemes would be reintroduced aimed at self-reliance and there would be employments in education and health sectors for the qualified citizens.

“You can be sure that there’s something mischievous, something akin to sabotage. A government that could only seek for loan to be able to pay salaries, was recruiting workers she knew she couldn’t afford to settle their salaries, it’s just inhumanly unfortunate.

“We constituted a verification committee; of the 7, 000 workers employed by the previous government, only 4, 000 were proven to be genuine and qualified.

“You can imagine SSCE, NCE and Diploma certificate holders, were employed as lecturers in State Polytechnic SPY Yola. This is intolerable a mockery – in the quackery theatre – of our education system.

“I’ve said earlier, 2000 teachers would be employed. The qualified to teach among the 3,000 that are relieved of their unmerited employments would be absorbed.

There’ll also be recruitments in health sector and skills acquisition schemes those whose certificates will not qualify them to teach in our schools can key in,” Fintiri said.

On the security situation, Fintiri revealed that the Shilla gangs were constructions and sponsored by some key actors in the previous government. The drugged youth without attitude as Shilla members notoriously matured to the status of above the law and beyond the control of community elders. Women were the worst hit by the Shilla atrocities.

People were being attacked on the street, in the market and even at ATM. The state was degenerating into anarchy Fintiri led government found intolerable. “We gave the criminals a non negotiable ultimatum to surrender, repent and withdraw from their Gerio enclave they code named Sambisa.

Those who failed to face the reality with the new government and would not surrender were twisted with the arm length of the law, closing down their Gario enclave completely.

There was the Gidan Wanka atrocities, where ladies were recklessly raped, among the heinous atrocities cocooned under the cover of entertainment. The allied security forces equally dislodged the area to instill sanity and peace dented by the previous government.

“Whoever is alleging that he was asked to pay school fees, should produce the receipt of payment. We’ll deal decisively with the principal because it’s criminal,” Fintiri said.

Fintiri observed that there would be no security where education would not be supported. That was the philosophy behind the introduction of the school feeding system and the free education.

For the programme to be able to survive after his government Fintiri said a free education law would be enacted.

“At the inception of our administration, there were about half a million children who were out of school; some of the kids were reduced to begging on the street.

“The school feeding system and the free education proved to be worthy by bringing relief to the destitute and reducing criminality,” Fintiri said.

Fintiri projected that very soon private schools would be empty of students owing to the quality control, free feeding and free education, which included WAEC and NECO examinations.

“We need patience and cooperation of parents, because private schools will soon close down for lack of patronage,” Fintiri said.

On payment of scholarship, Fintiri said that his government intended to start giving scholarship to students in tertiary institutions from the month of December. However, bureaucratic procedures have to be observed with a view to legitimising it.

On portable water, Fintiri said his government was working assiduously to ensure water supply from the treatment plant in Yola North to Yola South.

On agriculture, Fintiri noted that Adamawa state was among the food baskets of the country. He assured that measures were taken to encourage mechanised farming; rice processing facilities would also be made available.

Having expressed his appreciation for support and understanding, Fintiri has called on the people of Adamawa to continue to be patient as the hard time was only temporary.

“The quantum of rot left as legacy by the previous government is unimaginable. It’s been difficult but we’re gradually fixing it. We shall be better next year, In Sha Allah,” Fintiri Said.