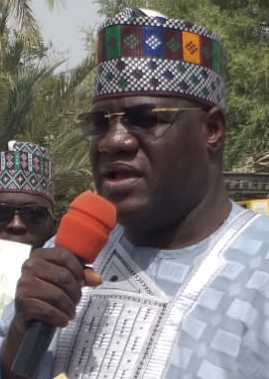 The chairman tasked them to dedicate themselves to selfless service in the interest of their community with integrity.

The chairman is said to be a man that dishonoured people who peddled tribal sentiment by pelting them with pebbles of peace from the pots of unity, mutual coexistence and harmonious relationship.

Recall that there was scandal during the PDP primary election in Maiha local government Adamawa state, northeast Nigeria, where rigging and any form of anti party activity would not be tolerated by delegates

Sensing that the primary election would degenerate into anarchy never cherished in Maiha, the chairman was said to have resolved to withdraw from the race if that would result to restoring peace.

It took the intervention of Governor Ahmadu Umaru Fintiri to cool tempers at the government house in Yola where the aspirants were invited for a resolution, which eventually endorsed the candidacy of Idi Amin Pakka for the chairmanship race under PDP.

In Maiha, APC is said to have slumped down to hibernation resulting from Bindow’s costly mistake on matters relating to the Monarchy In Jalingo-Maiha District.

Bindow, misusing the executive power, deploying the fist of fascism, forced not only unpopular but illegitimate candidate on the community.

It was not without stiff resistance by any means judicial; the court of law condemned Bindow as a governor, for his act of anti Monarchy and directed for the approval of legitimate heir to the stool as selected by the Mubi Emirate Council and presented same for governor’s endorsement.

Bindow was reported to have declared that court order would not be honoured so long as he was the Governor. The governor appointed but disowned by the court order, was given an executive lift and protection to strengthen his romance with the contempt of court order that restrained him from parading himself as any district head.

The people of Jalingo-Maiha worked and prayed against the second coming of Bindow lest the story, history and essence of the monarchy subjected to murder; disorder of order.

Bindow was not to return. The Monarchy is salvaged against complacency to conspiracy for anarchy

ADC would not be of any significant with the unpopular candidates. The story of the political party descending to grass from a significant grace in Maiha, was said to have started from the State House of Assembly primary election.

“PDP was to become undefeatable in Maiha with the misfits out of mischief and selfish interests against the opposition parties in themselves by the unprincipled members,” a political analyst articulated.

In an interview with newsmen in Yola shortly after the reconciliation meeting at the behest of Governor Fintiri that eventually endorsed Idi Amin as the PDP candidate for the LG election, Idi Amin said some people were trying to cause dissention and mutual suspicion for anarchy in the peaceful community and people of Maiha seen to be living as one big family tied to the rope of unity as defined by the faith generally professed.

The chairman said that Maiha and its people would get to reconcile their differences in the interest of love, peace, unity, mutual coexistence, progress,development and prosperity.

Against any negative form of sentiment, the chairman promised to work with professionals, experienced on the job and knowledgeable persons, which by implication, he would disown and dishonour those who take to gossip, hypocrisy and/or take to tribal or faith sentiment as theology to evangelise.

Group of elders in Maiha commended Fintiri for conducting LG election. The pioneering deserved an ovation, they would put it. The group equally urged Fintiri to bring an end to the contempt of court and honour court order by approving the appointment of Barr. Mahmud Abubaksr Suleiman as the legitimate district head of Jalingo-Maiha.

The following are those who were inaugurated with their portfolios:

The supervisory councillors are:

To the dismay of his insignificant number of supporters, Idi the impostor was not in attendance even though an anonymous source among those who were disenchanted with supporting the impostor, revealed to the Periscope reporter that there was a peddler of rumour; an agent of, tainted by anarchy that no detergent could get to remove other than justice, was secretly insinuating, among the sympathisers of the impostor that Mubi Emirate Council has served Idi with the district headship appointment letter, that they should go on mobilising money and men to receive him for the celebration in Maiha.

“It was what he was told, as some of his followers would have said that he was being advised by the permanent secretary chieftaincy affairs to mobilise funds for her to facilitate the speedy endorsement of the aristocratic appointment letter and to gather impressive number of supporters, not necessarily from Jalingo-Maiha District, since Pakka district can raise the figure and have the population in camera as supporters of the Bindow appointed, court disowned district head presented to impress Governor Fintiri,” the informant said.

The fact remains that Idi and armed with injurious weapons supporters have desecrated Jalingo-Maiha Central Mosque on a Friday.

They have caused anarchy by inflicting various degrees of injury
on the faithful, on that faithful Friday.

The impostor and supporters currently on bail, are still facing court trial for the alleged criminal offence.

The impostor is banned from Maiha by the Adamawa state government and the security agencies acting on the court and executive orders with a view to restoring peace in Jalingo-Maiha.

The impostor has no right of appeal because the judgement passed was between Mahmud Abubakar Suleiman the heir to the stool and the Adamawa state government joined with others.

Till date, the Adamawa state government has not appeal against the high court ruling, signifying conformity to the judgement. What legal ground does the impostor have for the appeal, using which file judgement of what court?

The overambitious impostor was not properly advised by his solicitors and is being deceived by a permanent secretary chieftaincy affairs who is billed to retire by the end of January, 2020.

Governor Fintiri is not a digital ignorant that can be impressed by borrowed crowds intended to dress the impostor in borrowed robes, moralising William Shakespeare in “Macbeth.

ADAMAWA: Police arrests two rapists of minor, one at large