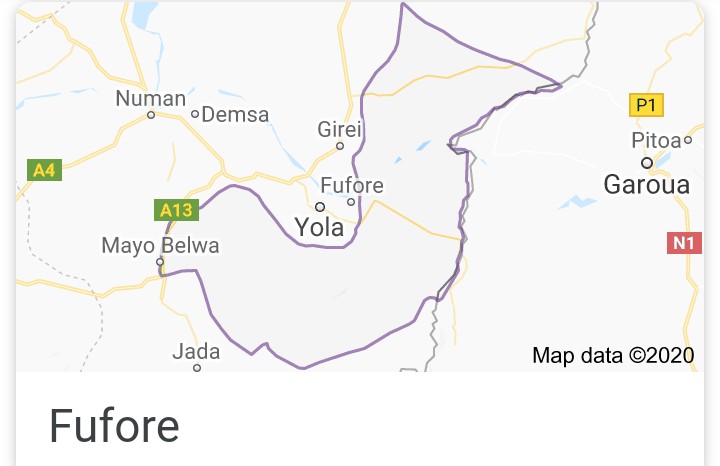 In a spectacular manner, similar to what one may call a foreign enemy occupation, Fufore local government area, Central Senatorial District, Adamawa State, Northeast Nigeria, has been taken over by kidnappers.

In fact, it has reached a situation today that people have not only become used to it, but they have resigned to faith. We are hopeless as a result of helplessness.

Not only that the government has failed but our people have totally become a failure unto themselves because everyone is now a kidnapper or an accessory to it or one who knows a kidnapper or knows an informant to kidnappers, but kept mute. It is now a big ‘local business’.

It is no longer news and as a result, people no longer care who is kidnapped, where he or she is kidnapped, how much ransom was paid and by who nor to whom is it paid? It is everyday occurrence, therefore, no body seems to care.

Earlier when it started with the kidnapping of Alhaji Sani Ribadu on his farm along Fufore – Yola road, it was people involved in agribusiness that were kidnapped. Later cattle businessmen became targets.

Our main line of business in Fufore is cattle trading and undoubtedly, Fufore has the largest number of cattle in the state of Adamawa owing perhaps, to the fact that we share border with the northern region of Cameroon and their cattle (which are taller) sell in our part of the state, including in Ngurore in Yola South Local Government and Ganye Local Government, Southern Senatorial District of the state. This has increased the number of our cattle holding to give us that advantage.

Our cattle businessmen have no holidays nor do they have weekends. We have large cattle markets where hundreds of thousands cash turnovers are daily recorded in the following cattle markets –

When assault on cattle businessmen was sustained, this class of breadwinners became scared of going to the markets themselves and our people lose prosperity on a daily basis. This not only brings about, but sustains poverty in an already poor region.

Then our traditional institutions started to rise to the occasion. In what appears like a revenge mission however, Waziri Ribadu was kidnapped, the father of Ardo Yaungo was kidnapped and Jauro Jubawo was also kidnapped. Then silence. Ardo’en no longer say a word and have even stopped going to markets.

Then it became the turn of agribusiness men since the kidnapping of Sani Ribadu. It has since been sustained as in the last raining season, once a farmer went to the farm with a car and park by the roadside, he gets apprehended like a chicken.

Now this group of businessmen are also on the verge of disappearing.

OPINION: On positions and possessions: Between the WHO and…

Recently it was the turn of ‘yan kiwo’. That is people who buy three, five to ten emaciated cows in the dry season, keep them in intensive feeding for ninety days or less and sell. Kidnappers now go round villages and peep through thatched houses to see who and who are keeping small number of cattle for ‘kiwo’. Once it is almost time for selling, they kidnap the owner.

During negotiation for ransom, if the family say they have no money for ransom, the kidnappers would say “na mo do dura ha nder sare na”?
Crudely interpreted to mean, “isn’t he fattening cattle at home?”

With this secret known, they have to sell and deliver the money to the kidnappers.

Then they devised another method. Since most men do not sleep at night in our villages, once the kidnappers come and the man runs away into the bush, his wife or wives would be taken away. You have to pay.

The current method trending is even more bizarre. This is the kidnap of family members of absentee “well to do” members of our community.

Today, most people that have N50,000/ or so capital for doing business have moved to towns for fear of being kidnapped. The trend now is to kidnap the relatives they left behind. If the victim says he/she is poor, the kidnappers would say “min andi ai“ and then say “na waine ma mo woni Jimeta don na”?
Crudely interpreted to mean, “we know but you have a well-to-do relative in the city.” You then have to pay. Proxy kidnap one would say.

The sum total of all these is that our people who were once prosperous by Adamawa standard, have become poor. They can’t attend neighbouring village markets to sell wares without being waylaid and robbed on the road.

Big time cattle businessmen can not go to the markets to buy and sell freely in Wuro Bokki, Gurin, Fufore, Chigari and Ba’ Usmanu markets in Fufore LGA. Nor can they freely buy and sell in Ganye or at Ngurore market in the neighbouring Yola South local government area. They are constantly being watched and from within.

Agribusiness is no longer feasible. Once a car is parked by the farmstead, you have become a chicken. Ardo’en can not stand strongly against kidnapping as they or their own parents or relatives may be taken away.

In villages you can not do ‘kiwo’ for fear of peeping kidnappers. If you run away when they come for you, they take away your wife or children. And if you have the means of relocating to Yola and leave aged parents or relatives in the village, they ‘take’ them by proxy kidnap.

Let it be known however, that at the risk of being repetitive, wallahi the enemies are from within. Boko Haram are the youth of the area that are doing it whether in Borno, Yobe or Madagali and Michika. Banditry whether in the state of Zamfara, Sokoto or Katsina, is the same.

I make bold to say it is the same in Fufore. It has now become a big local business in our community as it is now an integral part of the local illicit economy. In Fufore as in elsewhere, the kidnappers go to the same markets with the local ‘businessmen’. So information gathered from each other is exchanged through complex trade networks. It is only our people who have good knowledge of the environment and how to operate within it that aid and abet the ‘business’.

Kidnappers in Fufore are not different people. They know people as much as they are known.