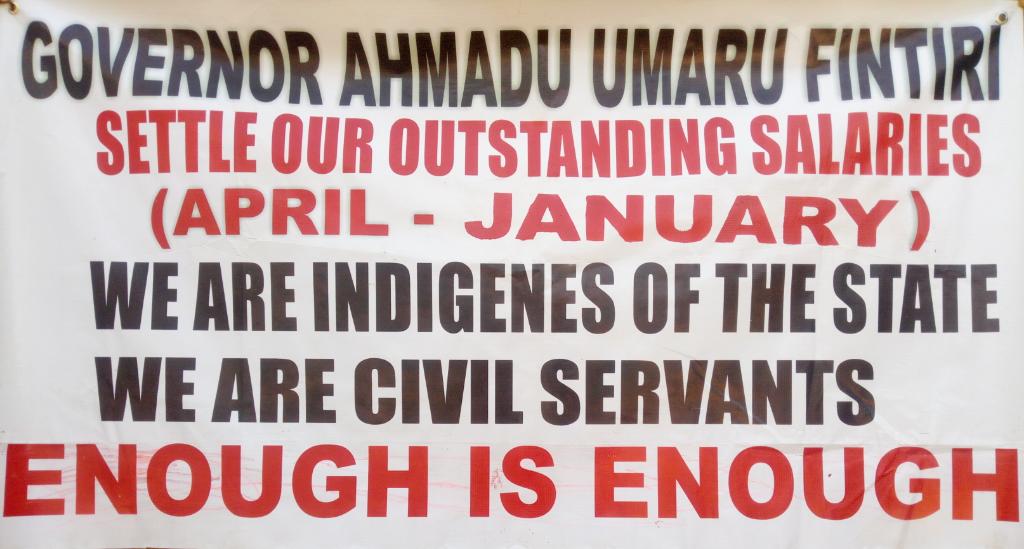 The Bindow employed, Fintiri sacked Adamawa state government workers Friday, said they were not afraid of arrest, as a consequence of their planned peaceful protest to hold on Monday, February 10, 2020, agitating for the reversal of the unlawful termination of their appointments and payment of their suspended 10 month salaries.

The sacked workers have, in a letter dated February 3, 2020, notified the Commissioner of Police, the DSS and other security agencies in the state, about the peaceful protest.

“All the over 10,000 unpaid civil servants, wish to notify and seek for your support to do a well coordinated peaceful demonstration in quest of our ten months (April – January, 2019/2020) outstanding salaries.

”The movement will kick-start from Monday February 10, 2020 at about 9:am. The police roundabout will be our take off point to government house Yola and house of assembly,” the letter read.

The story seemed to have changed as was alleged, after the Adamawa state Deputy Governor visited the Adamawa Police Command. The sacked workers interviewed, revealed to the Periscope reporter, saying that their chairman was invited by the security agencies, directing that considering the prevailing spade of insecurity in the state, request for a public protest, however peaceful, would not be guaranteed.

This was followed by a press release issued by the Police Public Relations Officer, DSP Suleiman Yahya Nguroje, against the planned peaceful protest.

“The command wishes to respectfully advice members of the public to go about their normal businesses and never to do any act or conduct that will likely cause the breakdown of law and order.

”The command further advices that any person or group of persons having grievances, should channel it to the appropriate authorities or resort to legal means and not converge on the street, blocking the roads, denying people their fundamental rights to freedom of movement and causing fear into the mindset of the populace. Such will make criminals to hijack the protest and cause violence.

“Members of the public are hereby warned to adhere strictly, as police will not hesitate to take necessary action against anyone that violates the laws of the land,” the statement read.

Why was the group’s intention not discouraged when it earlier submitted the notification letter to the security agencies? What could have informed the warning by the security agencies, less than 72 hours against the planned peaceful protest by the 10 months salary unpaid and eventually sacked civil servants, demanding for reversal of the government’s unpalatable decision?

Speaking to the Periscope, Faisal Baba, the leader of the Bindow employed, Fintiri sacked workers said, they were not insurgents, they were not fighting a government. However, there was perceived tyranny associated with the actions that resolved in suspended their salaries for about 10 months and eventually, terminated their employments, without entitlements, following a change of government. Some of the over 10,000 victims of sacking were sick but could not access medical treatment, could not sponsor their children to school, were summarily famished and gradually declining; dying of starvation, hence would not be afraid to register their complaint to the world through a peaceful means in spite of the threat of arrest.

“We’ll go ahead with our planned protest and will never be intimidated by any threat.

”The police has threatened to arrest us if we should continue with the protest as planned. But we will never back down even if we are going to pay the supreme price.

“The DSS have also asked us to go to court instead of protesting but we told them in black and white that staging a peaceful protest is constitutional. Security agencies are only written to be informed, to provide security against those perceived hijackers of peace protest, rather than request for approval for the protest.

“Yes! going to court is part of our programme. However, litigation option can be after the peaceful protest. For now we’ll not allow anyone to take it away from us,” Faisal said.

The sacked workers said they were 10,000 with some of them employed not in September but January, 2018. Some of them were in the civil service since 2017 and even beyond.

However, the Hon Commissioner of Information and Strategy Adamawa State, Dr Umar Garba Pella, earlier revealed to the Periscope that the workers affected by the stand down were just about 3,000 out of the about 7,000, not 10,000 unlawfully employed by former governor Bindow.

“SHEGE KA FASA” is a foul language, unacceptable in the north – Group in Diaspora