Recall that when President Muhammadu Buhari went to Maiduguri to commiserate with the government and people of the state, some insignificant number of youths, believed to be sponsored students of a tertiary institution boobooed the president with his entourage, chanting “bamayi, bamayi” “interpreted to mean “enough is enough,” expressing anger over Auno attack said to have claimed 30, with a university of Maiduguri mass communication student among the innocent passengers that were burnt alive on her way back to school, which Shekau made reference thereof.

There was however another video, mischievously not widely circulated, of of pro Buhari supporters, larger than the anti Buhari chanters, with some flying flags, some holding banners, while some others simply waiving their hands, singing victory visitor’s song, welcoming President Muhammadu Buhari with his entourage to Maiduguri.

Earlier the clerics and council of Muslim leaders responded to Shekau’s video threats against Dr. Pantami the minister of communication and for claiming responsibility to Sheikh Jafar’s death, tagging him as coward who could only release video in hiding and at the most, took to guerilla styled war.

In like manner, as a hit back, the civilian JTF referred to as ‘yan gora’ have released a video in response to Shekau’s trending anti Buhari video.

The Biu courageous youths have challenged Shekau against being coward to meet them for a face to face combat, he and his army have been threatening.

“I seek refuge in Allah against curse Satan.

“This is a response to Shekau’s video threat and insult.

“Shekau threatened that he was ever ready to keep insurgency; savagery and barbarism thriving.

“We are Bui militia youths challenging insurgency, preying against the coward always in hiding Shekau with his army of scallywags.

“We are allied army of the Yangora that is, civilian JTF, the vigilantes that is the hunters, our army and the hisba group.

“We have all come out combatant ready and are here in Sambisa forest hunting the frustrated, hypocritical and coward Shekau with his army; code named Boko Haram.

“Shekau, my take is that you have made offensive and libellous utterances against President Muhammadu Buhari.

“Take warning that President Muhammadu Buhari isn’t your mate, he’s beyond your reach, your scope, you limit. You are an infinitesimal.

“Shekau! if you’re prepared for death, we’re already waiting for it.

“Shekau!’ if you think you that you are a courageous protagonist not a coward hypocritical antagonist, we challenge you to come out battle ready.

“Shekau, I swear by Allah if you come out, I’ll skin you alive. 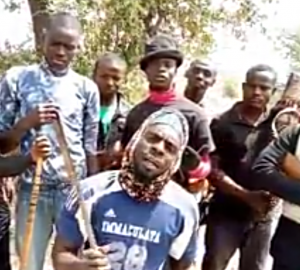 “You think you have have a vicious army to be proud of. Your army is but like dog that barks but can’t bite; army of cowards that shiver with the sound of gunshots.

“We’re not afraid of guns. If you’re courageous enough, stop the guerilla war, stop the cowardice, be combatant. We’re ready for you,”.