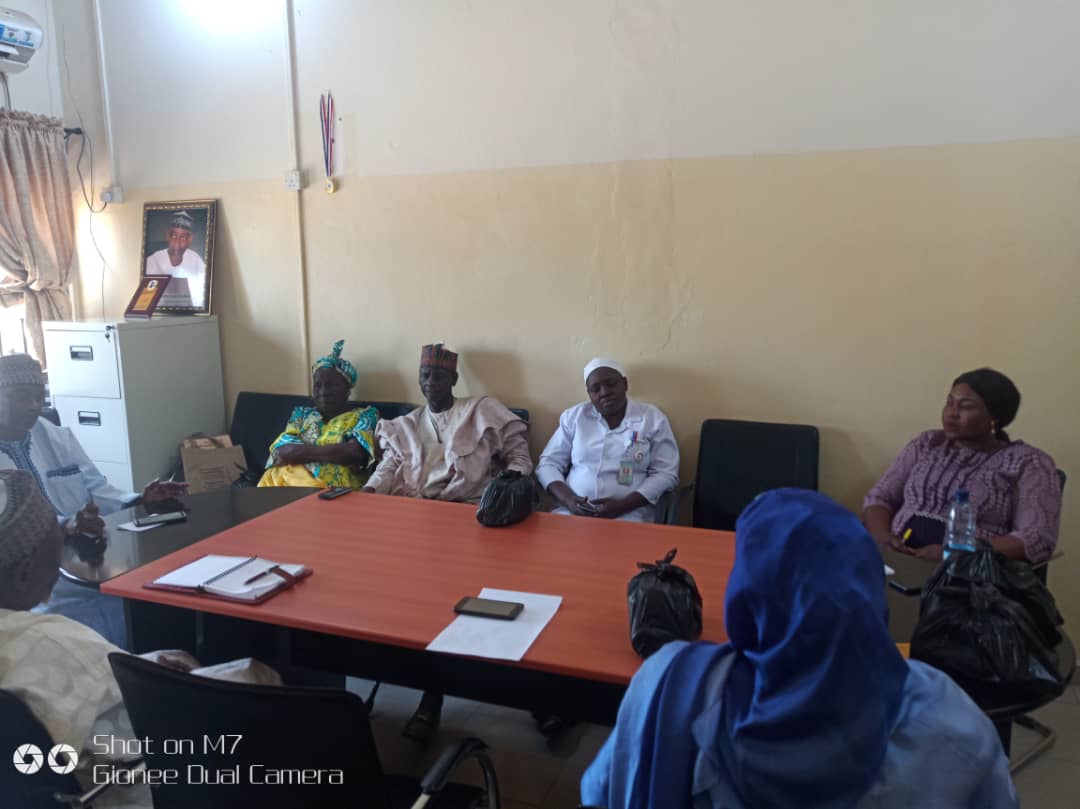 The new Medical Director of the health facility, Prof. Sa’ad Aliyu Ahmad is passionate about compassionate, which could not be unconnected to his aristocratic lineage.

Prof. Sa’ad, having taken cognisance of the growing number of the indigent patients parasiting in the lean rather unsustainable resources, has challenged the staff of the social welfare of the health facility to thinking outside the box with a view to be self-sustaining in terms of tending to the indigent patients.

Prof. Sa’ad, having been impressed with the activities of the hospital paupers fund that is established in FMC Yola, has recommended the social welfare unit of FMC Jabi to visit FMC Yola and get the blueprint with a view to introducing same in the health facility.

Mrs.Faith Onyogo is the head of social welfare unit of FMC Jabi, she visited FMC Yola to study the activities of the hospital paupers fund.

Onyogo is well received by the management of FMC Yola and the hospital paupers fund committee.

Onyogo, having commended Prof Sa’ad for his foresight and for arranging her study tour, explains that she is in FMC Yola mainly to learn about the hospital paupers fund.

“I’m hear to learn about about the hospital paupers fund; how it is established, the composition of the fund scheme’s members, the sources of fund, the activities and challenges of the funds scheme,” Onyogo says.

Onyogo requests to know these Tuesday, during interactive session with the hospital paupers fund committee members at the secretariat of the fund’s scheme in FMC Yola

Alh. Suleiman Abdullahi is the chairman of the hospital paupers; having welcomes the guest from FMC Jabi, says that the fund’s scheme has been rendering free consultancy services to health facilities that want to introduce hospital paupers fund scheme.

“We’ve earlier received members of the social welfare of FMC Keffi, Nassarawa state and FMC Azare, Bauchi state, who have come to study the activities of the hospital paupers fund in FMC Yola. We gave them the blueprint to be able to establish their own,” Abdullahi explains.

FMC Yola hospital paupers fund is establishment by Prof. Auwal Muhammad Abubakar the Medical Director FMC Yola, following the growing number of the indigent patients admitted in hospital, necessitated by the activities of the insurgents and the economic meltdown; considering the lean resources of the health facility and the newly introduced TSA and the IPPIS policies of the government.

“The Federal Medical Centre, Yola has traditionally been exempting payment for the healthcare services rendered to such category of patients referred to as indigent patients, as one of her corporate social responsibilities.

“However, the upsurge in the number of those requiring such exemptions and the dwindling financial resources of the hospital have made the management to look into the matter with a view to finding a sustainable solution.

“This has led to the creation of a Hospital Paupers Fund committee, which inauguration was celebrated on Thursday 16, August 2015.

“The fund committee, has 18 members categorised into external and internal members.

“The external members represent the three geopolitical zones of the state. They are also drawn from retired civil servants with excellent records during their service carriers.

“The internal members are members of staff of the Federal Medical Centre, Yola, that represent the required service windows.

“The chairman of the hospital paupers fund is Alhaji Suleiman Abdullahi; a onetime General Manager Savannah Sugar Company, gubernatorial aspirant, a politician who cultivates the philosophy of politics without bitterness, agricultural consultant with the Kelele Nigeria Limited and serving board member of the Modibbo Adama University of Technology MAUTECH Yola.

“The Hospital Paupers Fund, Yola HPFY has as its terms of reference to:

1. Sensitise philanthropic individuals, corporate bodies and the general public on the plight of the indigent patients.

2. Seek for financial assistance towards meeting the healthcare services needs of the indigent patients.

“The HPFY went into collaboration with the managements of media organisations in Adamawa state with a view to sensitising well meaning individuals and organisations, inviting them to join the corporate and collective social responsibility by assisting the indigent patients through the Hospital Paupers Fund.

“The fund committee has received the postings of the traditional leaders; the monarchs by means of courtesy calls before approaching individuals and organisations to contribute funds for services rendered to indigent patients at FMC Yola.

“However, the beneficiaries to the fund must meet certain conditions before they could draw on the funds resources. The criteria to be fulfilled are:

a. The beneficiaries must be on admission in the hospital with a hospital number

b. He/she must be recommended for assistance by a consultant in FMC Yola

c. The Head of Clinical Services of the hospital will approve the recommendation and confirm the amount required.

d. The social welfare office will check to confirm that the patient being recommended for assistance is indeed indigent and cannot meet the financial requirement for the services to be rendered.

e. On completion of the procedures above, the request forms are sent to the chairman HPFY for approval.

f. As soon as the chairman’s approval is obtained, the hospital authorities will provide all the recommended services as payment for it is assured.

g. It is important to note that any payment to the hospital for services rendered is made directly into the Treasury Single Account of the hospital.

h. There is no cash transaction between the HPFY and the authorities of the hospital. This arrangement ensures transparency and cuts any possible leakage on the funds.

i. This is a most commendable arrangement set up by the hospital management and adopted by the HPFY.

j. As at now, the services that are being paid for by the fund for indigent patients include; surgeries, investigations, drugs and hospital bed fees.

The management of FMC Yola has allocated a fully furnished office to the HPFC in the hospital.

Faith based organisations in the hospital such as the Islamic Medical Association of Nigeria and the Fellowship of Christian Health Workers, have pledged to be contributing funds into the account every month.

The HPFY is also grateful to the individual contributors who extend the philanthropic gesture and the media organisations that keep on publishing and publicising the activities of HPFY as one of their corporate social responsibility.

HPFY is hereby inviting corporate organisations to join the popular call and contribute generously to the scheme:

For individuals and organisations that want to contribute, they can do so through the following fund account Number: