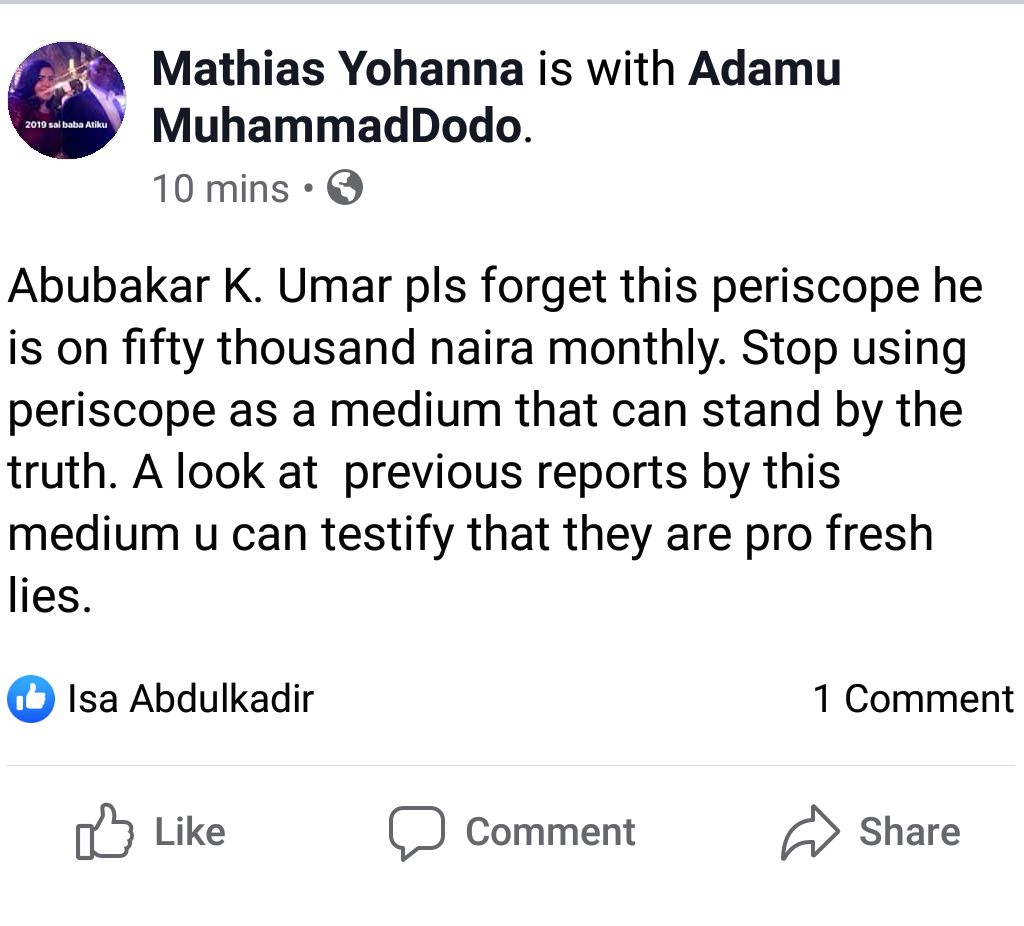 The attention of the Periscope editorial board is drawn to the poorly written, baseless, and malicious libel against the media, sent by one of our readers seeking to know whether or not N50,000 monthly would be enough to run a media industry.

He said, one Mathias Yohanna shared it via his Facebook timeline as below:

“Abubakar K. Umar pls forget this periscope he is on fifty thousand naira monthly. Stop using periscope as a medium that can stand by the truth. A look at previous reports by this medium u can testify that they are pro fresh lies.”

This is because the Periscope has debunked the lies, defended Amb. Mohammed B. Tukur the SSA on New Media to the Adamawa State Governor, from the malicious libel peddled against him by the uncritical, bereft of objectivity, beneficiaries of the previous apparently deceptive government that the Periscope remained tough in challenging.

Tukur has on Friday, accompanied his principal with his entourage to the Adamawa – German Medical Centre, located at the State Specialist Hospital in Jimeta to inspect the facilities at the isolation centre.

The retrogressive elements denied that there were isolation centre established by Adamawa State Government and that the pictures of the visit Tukur posted on his Facebook timeline were cropped from Google, making it an unpardonable crime that would only result in resignation.

The Periscope with other reporters were there. There is the isolation centre being established by the Adamawa State Government and the facilities are there, thereby rejecting the claim that it were fictitious images.

The Periscope has no need joining words with those whose “characters and characteristics,” moralising Dan Masanin Kano, typify what the poet Alfred Lord Tennyson would creatively consider as “Lotus-Eaters.”

Some could consider them as the weed induced, others would say the local brew gives them a forgetful, inarticulate culture, whose liquor drowsy influence, reflects in the way and manner they communicate, either written or oral.

A brief deconstruction of Mathias’ piece:

Notice that the Periscope is being addressed, using pronoun, as the third person male singular; “he.”

Is it referring to the Periscope as a media organisation, as a publisher or reporter?

The third and the last sentence: “A look at previous reports by this medium u can testify that they are pro fresh lies.”

Notice the drunken contradiction here; the Periscope is referred to as “this medium” and addressed in pronoun, as the third person plural “they,” away from the earlier singular “he” position.

Now coming back to the question, can N50,000 monthly be enough to run a media industry?

I will refer you to the weed influenced, liquor induced, Lotus-Eaters for an answer.

But come to think of it, who pays the Periscope a paltry N50,000 monthly? What a fresh lies, as Mathias himself once said he would want to be addressed and/or referred to! It defined the content of his three sentences response to Abubakar K. Umar.

Wasn’t Mathias the frustrated media aid to Bindow who then failed to repel the criticisms launched by the Periscope against his principal’s seeming clueless and apparent deceptive led government?

How much did the government in deception decide to silence the Periscope to side with it? I hope he has been in the know.

Has any reporter of, or the publisher and/or the Periscope as an incorporated media organisation, with international tentacles received any money from Mathias’ principal then, even when it defended some of its policies considered as being objective an improvement over the cluelessness?

I hope Mathias is not hemmed by defective memory He ought to have recalled that during the Periscope 2016 maiden productivity award, his principal, he was delegated to represent, was honoured with the philanthropic award in recognition of the N5m he donated for Isa Hamma’s haemodialysis management; a victim of surgical error whose kidneys, mistaken for tumor, were removed at a private clinic in Jimeta.

In response after having received the Award on behalf of the state Governor who lamented that the invitation was impromptu, Mathias himself, without any prompting, acknowledged that “the Periscope remains investigative and objective news medium.

Some uncritical minded openly condemned the Award, thinking that it was projecting the then Governor Bindow as the Best Governor of the Year, claiming what could not be substantiated that the Periscope was paid a huge amount of money.

Did the Periscope request any money for that even when N25m was said to have been budgeted for the best Governor of the year award organised by the Leadership newspaper, even though it was said that it was only N10m that eventually went for the Award?

Another deception beyond fresh lies that Mathias could not tell what happened to the balance of N15m of the taxpayers savings.

For Mathias with his likes, attacking Fintiri led government, however unconstructive, counts for objective journalism and spelling out the government’s achievements can only be done by the beneficiaries of N50,000.

The Periscope remains investigative, analytic, human angle based and developmental medium, serving as the voice of the voiceless and in defence of the oppressed. It isn’t beggarly and its ID card is not a meal ticket.

Mathias can be sure that the Periscope is indeed richer than the N50,000 monthly PR journalism.

In fact, if the Lotus-Eaters want it, The Periscope can give them an offer of N50,000 monthly, provided that it will not be used to buy liquor, drugs and/or weeds.

Boston. com would articulate that in Greek mythology, the Lotus-Eaters, or lotophages, were a specific group of people who lived on the island.

They were said to eat lotus plants on a regular basis, a plant that was native to their Island. As a result of the plant’s narcotic properties, the Lotus-Eaters lived in a perpetual state of bliss and apathy.

The Island of the Lotus-Eaters features briefly in Homer’s Odyssey, which is largely considered to be a story out of Greek mythology, but it was also regarded as a real location by ancient historians.

In the Odyssey, Odysseus and his crew are forced to land on the island of the Lotus-Eaters after being pushed off course by a storm while on their return journey to Ithaca.

After making landfall, Odysseus dispatches three scouts to find the inhabitants of the Island.

The three scouts soon encounter the lotus-eaters, who offer them edible parts of the local lotus plant as food.

Odysseus is eventually forced to drag his men from among the Lotus-Eaters and chain them to their places among the rowers, as those who eat from the lotus plant instantly forget any thought of leaving the Island and returning home, preferring instead to remain and continue eating the lotuses.

Wuhan Virus: Adamawa Isolation Centre Is Not Fake, The pictures Are Real Not Imagined Images – The Periscope