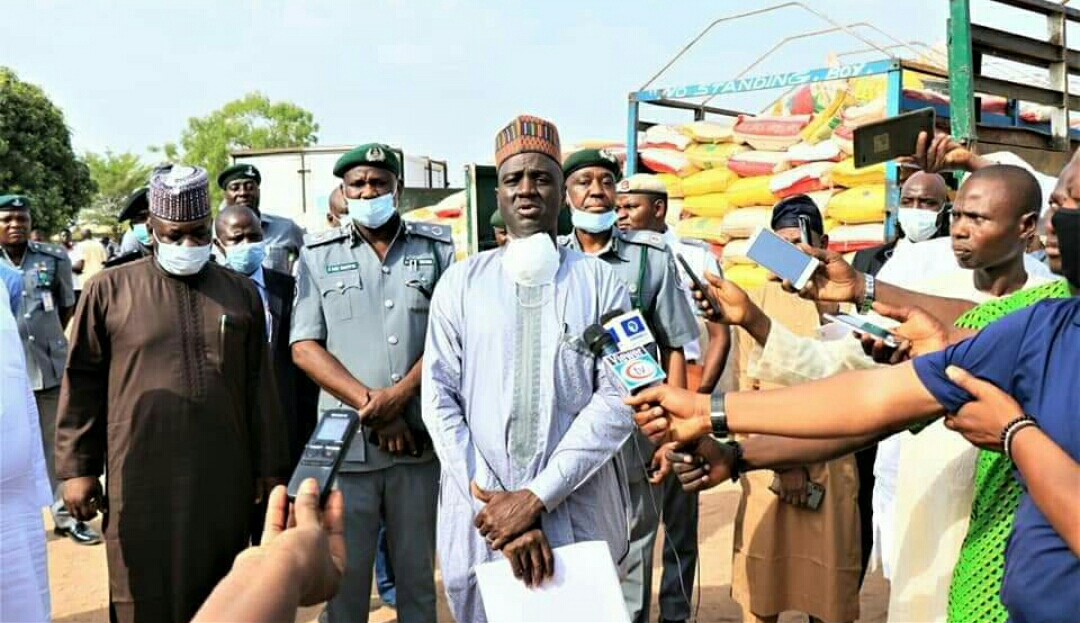 The Federal Government has sent three trucks of 50kg (3,000 bags) per boiled rice to Adamawa state, northeast Nigeria, as part of her measures to contain the effect of COVID-19 pandemic.

It was the first and only trucks of food items sent to Adamawa state government by the federal government.

The 3 trucks of rice were presented to the state government through the Federal Ministry of Humanitarian Affairs on Wednesday in Yola.

Literary critics have interpreted the presentation as politically symbolic; it has debunked the earlier rather partisan allegation that Adamawa state government or governor Ahmadu Umaru Fintiri has misallocated and diverted 50 trucks (30,000 bags) of rice meant for the citizens of the state.

Deputy Governor of the state Chief Crowther Seth received the food items on behalf of the state Government. He commended the federal government for what he considered as timely intervention.

Seth said Adamawa state government was mindful of the challenges thrown by the COVID-19 pandemic and has put in place holistic measures to be able to curtail the spread of the disease in the state.

Seth challenged those spreading libelous allegations that governor Ahmadu Umaru Fintiri has received food items from federal government, to always crosscheck their information before going to press, not to be humiliated by their ignorance.

Seth has assured that the three trucks of rice would be evenly distributed to those for whom it was meant.

Recall that some weeks previously, Dr. Umar Duhu, Adamawa APC chieftain, alleged that the federal government’s intervention with 50 trailers; arriving at 30, 000 bags of rice meant for the less privileged people in Adamawa state, was in part, unevenly shared and largely, diverted by the Adamawa state governor, who failed to consider the opposition party (APC) members in the distribution.

The Director Humanitarian, Federal Ministry of of Humanitarian affairs, Grema Ali Alhaji said the presentation of the three trucks of rice was inline with the federal Government’s directives to provide parliative to the citizenry.

The Area comproller of customs in charge of Adamawa and Taraba states, Kamardeen Olumoh who had earlier presented a total of 1800 bags of rice for unward distribution said it was in support of federal government in the fight against COVID 19.

On whether or not Umar Duhu will still face the law for libel now that Adamawa state government or governor Fintiri himself is vindicated, hence there is no sense being vindictive, Wugira simply asked whether or not the accused has rescinded the libel and has publicly apologised for his guilt.

“Don’t be literarily manipulative. Yes! Both the government and my principal are both vindicated, but facing the law against libel isn’t anyway suggestive of being vindictive; it is rather correctional.

“He’s given a 7-day ultimatum within which he should tender a public apology or face the law. He has rejected the ultimatum; by implication, has considered facing the law. It is not our own therefore, to retreat because no one seems to want to surrender.

“We are now being halted by the current COVID-19 pandemic condition; the court is now closed. But I assure you, once the COVID-19 is over, we’re going to file a case against him for libel. It should serve as an example, as a lesson,” Wugira said.

The Periscope is yet to hear from Dr. Umar Duhu. We’re however working on it.