COVID-19: We wear face mask only when coming to FMC Yola – Patients, relatives 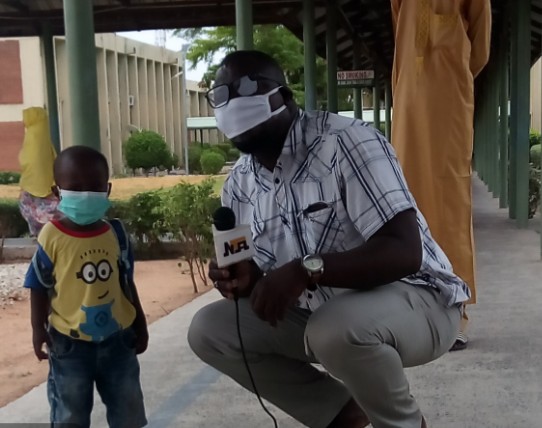 * FMC Yola is so serious about everything covid-19, security men at the gate wouldn’t let us in without wearing a face mask – client 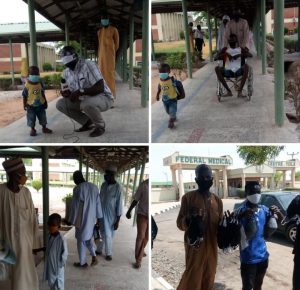 Sequel to the press release issued by the head of information and media relations of the Federal Medical Centre, FMC Yola, Adamawa state, Nigeria that the enforcement of “No Face Mask No Entry” order into the hospital would take effect on Tuesday last week, the media organisations; both the mainstream and the online that have helped in disseminating the information widely and without any prompting, have sent their news crew to report the level of compliance as an update.

Findings revealed that no one is allowed, right from the gate, to enter the hospital, whether in a vehicle or on foot, without wearing a face mask.

Physical distancing is also adhered to at every service window and soap, treated water and wash hand basins are being provided at every strategic point in the hospital.

There was mild a drama when a journalist, having introduced himself to the security men manning the hospital gate sought to be allowed in without a face mask. The request was however denied. He was told that he would only be allowed when he wore a face mask.

The journalist was only trying to find out whether or not there would be compromise on the side of the security men.

The hospital, the media findings can reveal, has provided varieties of face masks to her members of staff.

A security man at the gate, on condition of anonymity, revealed to the newsmen that the Medical Director of the hospital, Prof Auwal Muhammad Abubakar, has given them a standing order that on no account should they allow anyone, even a staff of the hospital to pass the gate without wearing face mask.

Most of the patients and relatives and the entire members of staff in FMC Yola wear face mask. The negligible number of the non compliant have their face masks, which they brought out from their pockets when interviewed, saying that they simply were not used to it but whenever they were approached by the security on surveillance in the hospital, they would quickly wear it to avoid the least embarrassment if not as most shown the way out like covid-19.

“FMC Yola is summarily so serious about everything covid-19. Prevention, they say, is simpler and better than cure. The security men manning the gate wouldn’t let us into the hospital without wearing a face mask.

“We felt bad initially, when we were ignorant about the good intention of the management of the hospital that is so tough on the enforcement of “No Face Mask, No Entry” order.

“Soap and treated water are being provided. Compliance to physical distancing is equally being monitored at every service window,” a patients relative said.

“To be honest with you, most of use buy face mask from vendors at the gate of the hospital. We only wear it when we are being made to, when entering the hospital. The moment we are out of FMC Yola, we’re free from being monitored, we integrate with the majority of the people in town that don’t see face mask as anything worthy of use,” Musa, a patient relative said.

Even “small children” are made to wear face mask in FMC Yola. A particular interest is the little above two years old boy, by name, James John who accompanied his six months old brother for immunisation.

James did not only help his mother with her bag, he also has a face mask. He has got attracted to people including the journalists.

NTA reporter completed his report saying, “if two-year old James can fight covid-19 wearing face mask, we can also do it.”

Those patients and relatives who did not wear face mask right from home are left with the option of buying from the private face masks vendors who strategically stationed themselves at the gate of the hospital.

“We make fortune with the sell of face masks here at the gate of FMC Yola. No one is allowed into the hospital without wearing face mask. People are not used to using it in town. So they rely on us to be able to access healthcare services. 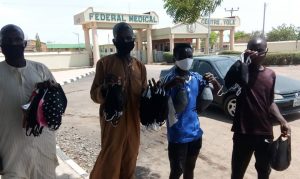 “Depending on the type and quality of the fabric used, the minimum price is one hundred and fifty naira and the maximum amount is five hundred naira. That’s how we sell and buyers are not complaining,” face mask sellers said.

They explained that they “don’t allow customers to be selective, touching the face masks. We examine your face and give you the face mask of your size.

“There’s soap and treated water close to the gate, being provided by the management of the hospital, we use it to wash our hands frequently to be able to secure the face masks.

If two-year old James can wear face mask, the adult shouldn’t complain that it’s expensive wearing face mask. Taiwan as a country was not locked down, schools and businesses were not stopped, she however defeated the covid-19 using face mask, observing social distancing and proper hygiene in addition to locking down only its border with China.

“FMC Yola must be commended,” Ambassador of Peace with the United Nations-POLAC Suleiman Babale Jibrin said.

FINTIRI’S ACHIEVEMENTS ARE PRIORITY BASED