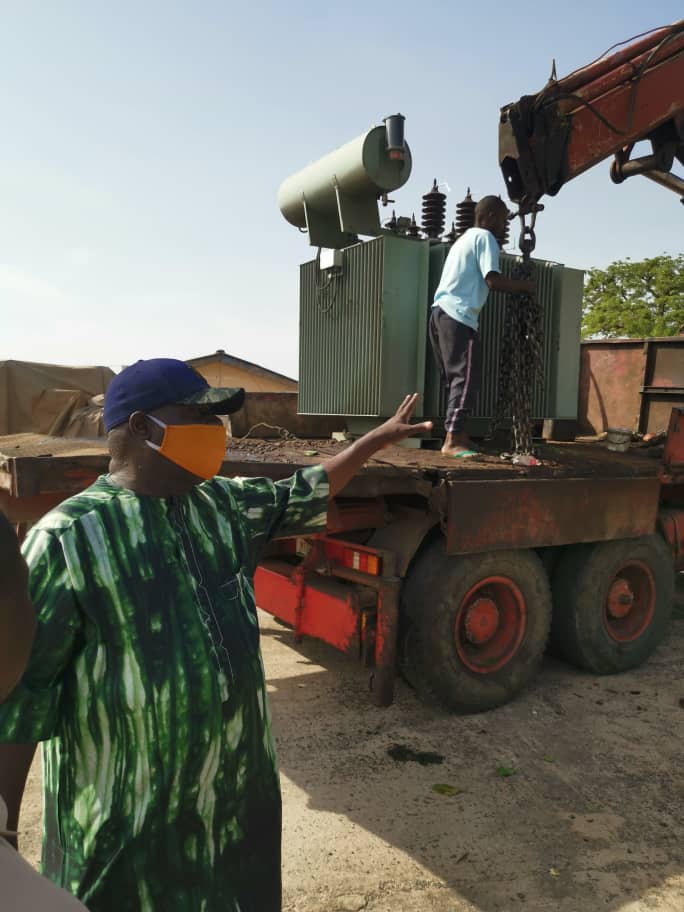 All arrangements have been concluded between YEDC and the chairman Maiha local government Dr. Idi Amin Pakka for a brand new transformer to be taken and installed in the headquarters of Maiha GLA the Periscope can reveal.

The chairman of Maiha LGA facilitated the transportation of the transformer and the YEDC staff handling installations from Yola the Adamawa state capital to Maiha a while ago.

The transformer would be mounted and test run tomorrow being Sunday, if all things being equal. One of the anonymous technicians would assure.

“To God be the glory. By Monday, every house and office in Maiha will enjoy electricity, In Sha Allah.

“Commercial services requiring electricity that has gone badly down for about a year will now pick up.

“Measures are worked out to safeguard the transformer against the vandals who will no longer eat their cake and have it.

“I commend the people of Maiha for their peace, patients and perseverance during this trying time. Life hasn’t been indeed that easy with the months of blackout. The community has endured. The Most Merciful, Allah SWT has indeed answered the collective prayers of the community concerned.

“Taking a syncategorematic consideration of the different kinds of leadership tied to its applied kind of democracy, I have opted for participatory leadership where every citizen is a player rather than being a mere recipient of received truth; where constructive criticism is viewed from the lens of and that which defines rather than defiles the need for amendment.

“The manifesto isn’t in anyway technical or a mere academic exercise. The simple spirit is to redefine the dividend of democracy, to unite rather than remain divided in the spirit of progress and development and to refresh the political atmosphere by restoring public confidence in governance as defined by the fresh air philosophy championed by our leader, the state governor, Rt Hon Ahmadu Umaru Fintiri, whom the state government workers called ATM governor.” Idi Amin told the Periscope in a telephone conversation just after the crane has taken off from Yola to Maiha with the transformer.

There is a rumour making the round, among some misinformed citizens that the transformer taken to Maiha, is lobbied by a lawmaker representing the area.

A lawmaker? Who is he? Where is he? At what stage of the struggle has he eventually joined the ally? How has his “lobby” been effected?

Cheap popularity is intolerable in Maiha for the non performing elected. The electorates keep records, sign performance inventory daily; waiting for when it will be practically presented.

The Periscope is monitoring the development as promised.