Borno State Govt: line up of media briefing in celebration of Gov Zulum’s one year in Office 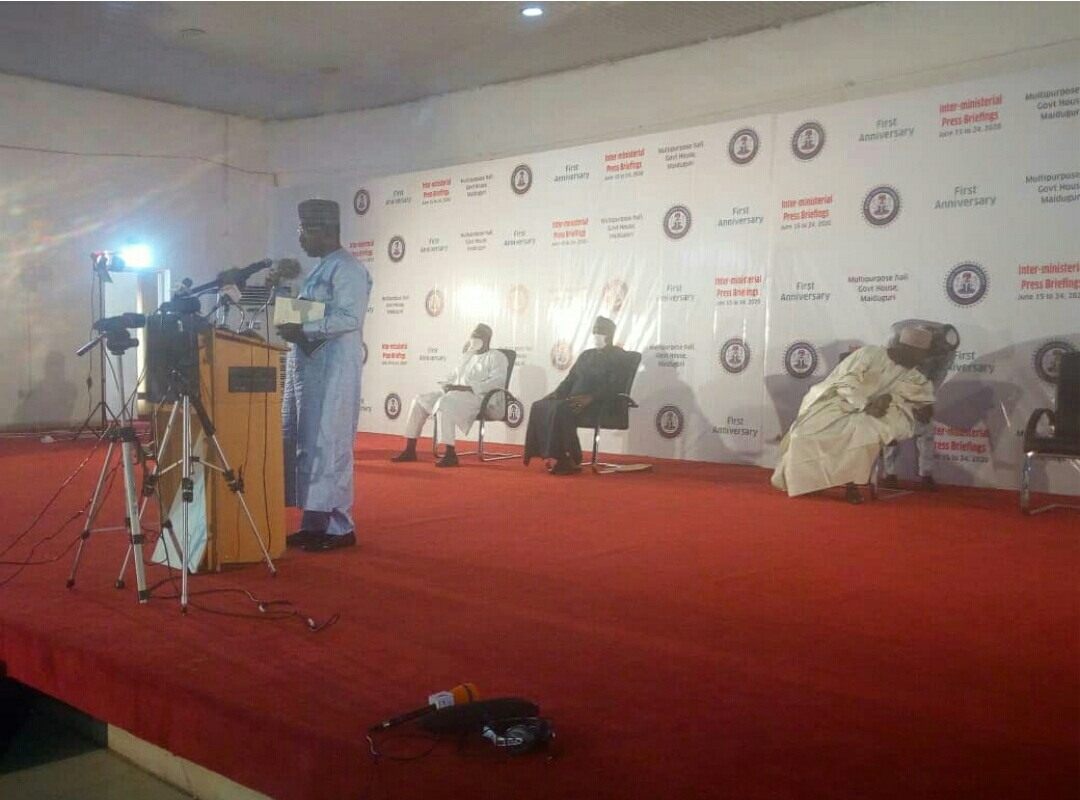 The Borno state government under the leadership of Governor Babagana Zulum has lined up 10 days inter ministerial Press briefing to mark his one year Anniversary as a Governor; May, 29, 2019 to May, 29, 2020.

While flagging off the inter ministerial press briefing at the Multi Purpise Hall of Government House in Maiduguri on Monday, the Borno state commissioner for Information, Home Affairs and Culture, Hon. Babakura Abba Jatau said “this time around we are doing our celebration in different way devoid of fanfare. We are going to have a 10 days press briefing to showcase the activities of Governor Zulum in the last 365 days.

“Governor Babagana Zulum has brought a change in governance, politics and development. He always move from one local government to the other, if he is not in Marte, he is in Chibok, if he is not in Chibok he is in Monguno. He also visited Chad, Niger and Cameroon to see to the welfare of his people.

“Governor Zulum, in the first time in the history of Borno state had office in the Musa Usman State Secretariat. He sometime stay up to10pm in the secretariat for in-files SBD, also encourages civil servants.

”During the period under review; May 29, 2019 to May 29, 2020, Governor Babagana Zulum has undertaken 326 projects, 49 Programmes and over 300 security programmes among others programmes in education, health, infrastructure and humanitarian humanitarian, to mention but a few,” Jatau said.

The commissioner revealed the lined up activities as follows:

* Briefing by the Ministry of Housing and Energy, on Tuesday June 16.

* Briefing by the Ministry of Education, Higher Education and Universal Basic Education, on Wednesday, June 17.

* Briefing by the Ministry for Agriculture, on Thursday, June 18.

* Briefing by the Ministry for Works, Transport, Trade and Commerce, as well as Economic Development, on Friday, June 19.

* Briefing by the Ministry for Local Government and Emirate Affairs, on Saturday, June 20.

* Briefing by the Ministry for Poverty, Youths Development, and Trade, on Sunday, June 21.

* Briefing by the Ministries of Agriculture and Environment, on Monday, June 22.

* Briefing by the Ministry for Works, Housing and Energy, on Tuesday, June 23.

* His Excellency Governor Zulum will cap it up with media chat on Wednesday, June 24.

“Governor Zulum within his 100 days in office executed 120 projects. So it is not so surprising that he executed 326 projects and 49 programmes in one year,” Jatau said.

In his remarks, the Special Adviser to the Governor on Media Communication and Strategy, Malam Isa Gusau thanked the media for standing and supporting the Borno state government under the leadership of Governor Zulum.

“The Borno state government is appreciating all your supports to Governor Babagana Zulum led administration in the last one year. The government will continue to work with the media in marking its projects, policies and programmes known to the electorates and the world in general,“ Gusau said.