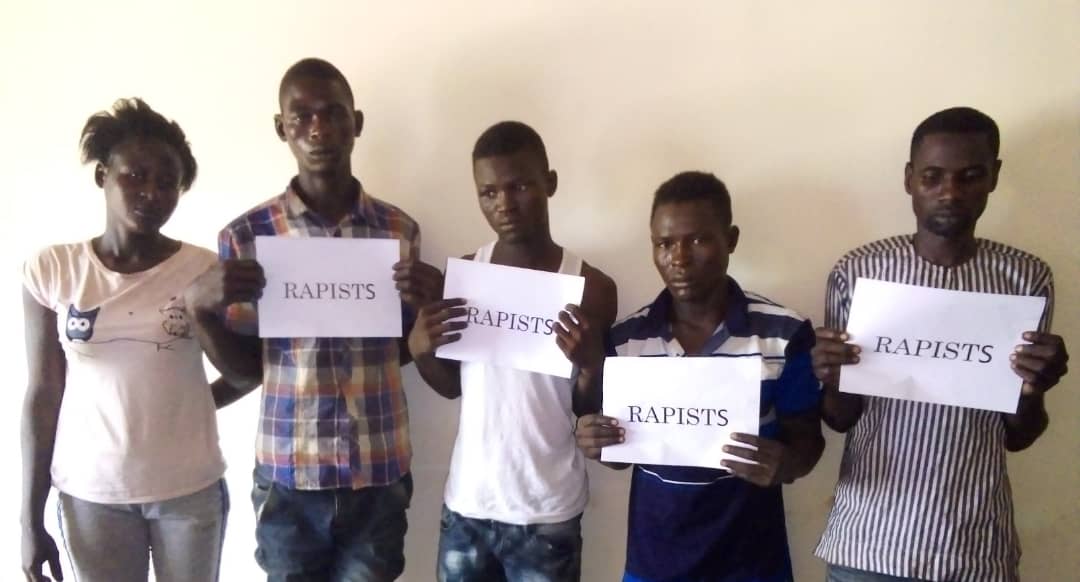 The Adamawa State Police Command has paraded five suspected gang members who were alleged to be involved in raping a 33-year old lady.

In a press release Thursday, issued by the Force Public Relations Officer, DSP Suleiman Yahya Nguroje, the command revealed that “on the June13, 2020, following a report received from a 33-year old Lady alleged to have been raped by syndicate of 9 at Gerio; a remote side of Jambutu, Yola North LGA, Police operatives attached to the Command’s monitoring team arrested  Ahmadu Ismail 20, Salu Buba 25, Muhammed Ali 28, Abubakar Ali 28 and a female by name Zainab Jafaru 30.

“The incident happened on June 12, 2020 when the 5th suspect Zainab Jafaru deceived the complainant to accompany her to a certain place to meet her boyfriend.

“Upon arrival, Zainab’s boyfriend currently at large, invited his gang members who forcefully had sexual intercourse with the complainant one after another.

“The command immediately swung into action and apprehended 5 out of 9 alleged rapists,  including Zainab for abetment.

“The arrest were made two hours after the Command assured officers of the National Human Right Commission who keyed into the fight against Rape and Sexual Gender Base Violent of its commitment to the war against rape and and other sexual assaults.

“Consequently, the Commissioner of Police CP OLUGBENGA ADEYANJU, fdc, while warning members of the public to desist totally from such attitude, equally assured that the police  would be professional and gender sensitive approach in handling such cases with a view to ensuring that victims are protected from further harm and abuse.