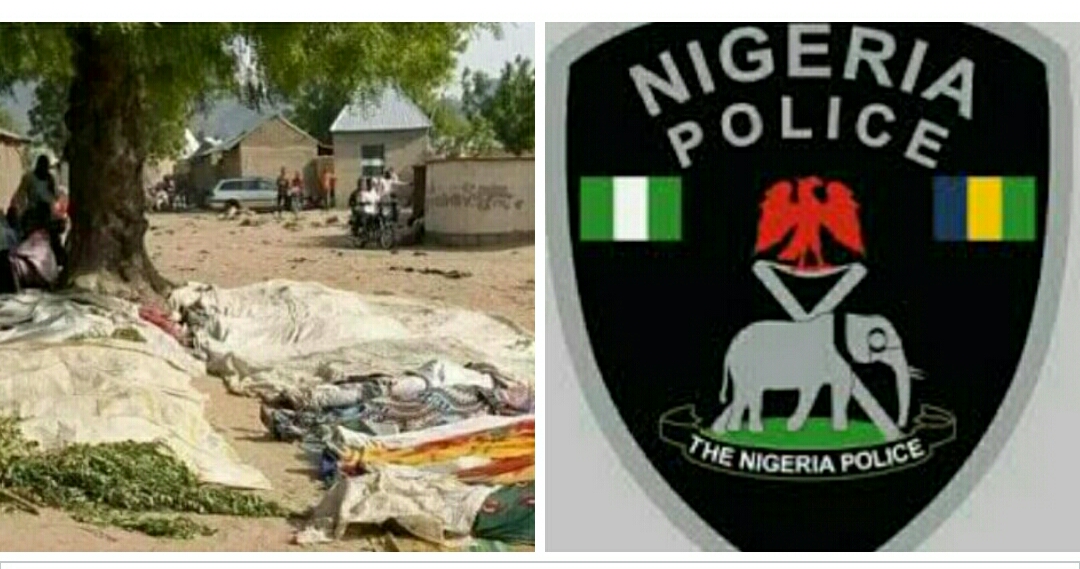 The Hausa/Fulani, peace loving, peace living, busy engaged farming community that boosts the economy of Tingno, in Lamurde local government area, southern senatorial district of Adamawa state, northeast Nigeria, unleashed by ethno-religious violence, not unconnected with socioeconomic rivalry, has accused the Adamawa Police Command of doing the bidding of tribal politicians by sparing the predators, while singularly, pouncing on the preys while searching for their missing relatives; either dead or alive.

“The policemen who ought to protect us from the onslaught of the heavily armed tribal militia, who pointed out that they lacked the capacity and that we should have to protect ourselves, only returned after the killing of our people, to arrest some of our survivors who have been in mourning and were still searching their unarmed, rather innocent relatives, claimed by the massacre; considered as total elimination, the community was revisited by, in an advanced manner,” the spokesperson revealed to the Periscope.

In a press conference Thursday, in Yola, the Hausa/Fulani farming community of Tingno that was violently attacked by Chobo tribal militia, which was widely reported, led by Aliyu Tingno, alleged that the Adamawa Police Command has taken side with the tribal politicians in the conspiracy to cover the mass murders of their people, by arresting some of the survivors.

“From the record, it was the Chobos that attacked and killed the Hausa/Fulani and destroyed their properties in Tingno and Chito villages.

“There is no any record of any single lost of life or destruction of properties from the side of Chobos. Yet, the Adamawa State Police Command could not arrest any Chobo person who were the perpetrators of the killings/destructions.

“Therefore we, the Hausa/Fulani feel that the action of the Adamawa State Police Commissioner is a clear injustice, bias and discrimination against our people.

“It is also important to state that the arrest of Hausa/Fulani of Tingno, was a scene within a scene, created by politicians that support Chobo tribe and the Adamawa State Police Command was used in executing the mission in order to divert the attention of the Hausa/Fulani Community to withdraw from the act of the enforcement of their fundamental human rights infringed during the recent crisis and to discourage the Hausa/Fulani from presenting their actual cases before the Judicial Commission of Inquiry set up by the State Government.

Responding to our reporter, the Police Public Relations Officer, DSP Suleiman Yahya Nguroje, said that the Commissioner of Police, CP Olugbenga Adeyanju, fdc, welcomed such petition as it would help in assessing the level of discipline and fairness of the officers assigned to restore peace and point out the real predators to hold to the criminal account.

Below is the full text of the Hausa-Fulani position as presented:

Gentlemen of the Press!

We welcome you all to this press conference to high light the recent violent attack by the Chobo Community on peaceful Hausa/Fulani Community of Tingno, Lamurde Local Government Area of Adamawa State; The antecedents of the recent communal crisis that erupted in Tingno on Thursday, 14th and Friday 15th May, 2020 and to voice out the predicaments we are currently going through as a result of the unprovoked attacks unleashed on us by the Chobo tribe.

THE CAUSE OF THE CRISIS:

The recent crisis occurred as a result of the action by a group of Chobo youths, who confiscated a tricycle belonging to a Hausa man and refused to release it under the pretext that the owner wanted to hit them.

The Hausa people demanded for the release of the tricycle but the Chobo youths become furious and embarked on a killing spree, destroyed properties and wealth belonging to Hausa/Fulani.

The Hausa/Fulani are the major Famers in that area and had over the years acquired reasonable legitimate wealth; the Chobo are therefore not happy and have been looking for a slightest opportunity to violently eliminate them from the area.

THE PLIGHTS OF HAUSA/FULANI AS A RESULT OF THE CRISIS:

On Thursday, 14th May, 2020 at about 9:00am, the Tingno Community noticed that the Chobo Militia were assembling near their area carrying dangerous weapons (guns), they immediately reported the matter to the Divisional Police Officer (DPO) of Tingno.

Regrettably, the DPO failed to take action to protect the community; this paved the way for the killings and destructions to commence.

The mayhem continued until late night when another contingent of Joint Security Team arrived from Yola at about 1:00am in three (3) Hilux Vans. After spending few hours they left and told the Hausa/Fulani to defend themselves under the pretext that they (The Security Team) were not well armed to defend them.

On Friday, the 15th of May 2020, a contingent of Mobile Police (MOPOL) was dispatched to the area. Unfortunately, they went and stayed at Lafiya Town.

The killings and destructions continued until when His Excellency, the Governor of Adamawa arrived with team of military and other security agencies who were left in the area to maintain peace and order.

The attack on the Hausa/Fulani Community of Tingno resulted in the death of 58 innocent souls. However, only 47 corpses were recovered, whereas some victims were burnt down beyond recognition and many are still missing with no information as to their whereabout.

60 persons sustained various degrees of injuries resulting from gunshots and were hospitalised at the State Specialist Hospital Yola, where two died thereafter.

52 persons were discharged, whereas 6 persons are still on admission at the hospital receiving medical attention.

Apart from the foregoing, 60 people, many Hausa/Fulani sustained injuries and were treated at private clinics, patent medicine stores and herbal-healers.

Properties including houses worth millions of naira and three filling stations were destroyed.

Over 1000 people were displaced; mostly women and children. Majority of them were camped at Kupte Primary School in Lafiya-Lamurde.

It is equally important to state that, on the same 15th May, 2020, the Chobos also attacked Chito-Tudu and Chito-Gangare; another Hausa/Fulani Communities neighboring Tingno. They killed 15 persons and  razed down the whole villages. Properties worth millions of naira were destroyed.

THE AFTERMATH OF THE CRISIS:

Since then, those arrested have been in detention in various police cells without bail.

From the record, it was the Chobos that attacked and killed Hausa/Fulani and destroyed their properties in Tingno and Chito villages.

There is no any record of any single lost of life or destruction of properties from the side of Chobos, but yet, the Adamawa State Police Command could not arrest any Chobo person who were the perpetrators of the killings/destructions.

Therefore we, the Hausa/Fulani feel that the action of the Adamawa State Police Commissioner is a clear injustice, bias and discrimination against our people.

Gentlemen of the Press, what the Commissioner of Police did on the 1st of June, 2020, was another wonders of the world because, there is no way the alleged Hausa/Fulani culprits could have attacked themselves, and destroyed their properties by themselves. This is amazing indeed.

It is also important to state that the arrest of Hausa/Fulanis of Tingno was a scene within scene created by politicians that supported Chobo tribe and the Adamawa State Police Command was used in executing the mission, in order to divert the attention of the Hausa/Fulani Community to withdraw from the act of the enforcement of their fundamental human rights, infringed during the recent crises and to discourage the Hausa/Fulani from presenting their actual cases before the Judicial Commission of Inquiry set up by the State Government.

Furthermore, even with the presence of security agencies in and around Tingno currently, the Chobos, in isolated cases do attack Hausa/Fulani in their respective farms and steal produce thereon.

They are also threatening to mount roadblock and confiscate vehicles/trucks that carry rice belonging to Hausa/Fulani that move in or out of Tingno Community.

The Hausa/Fulani people of Tingno wish to use this medium to appreciate His Excellency, the Governor of Adamawa State, Rt. Hon. Ahmadu Umaru Fintiri for his prompt action on the crisis that erupted at Tingno on the 14th May, 2020.

Indeed, the governor’s quick intervention, which ensured the presence of security agencies in the Tingno Community was able to halt the escalation of the problem and has brought about reduction in the number of casualties against Hausa/Fulani.

We also appreciate the role the state government played in establishing a relief camp at Lafiya Lamurde town and the provision of free medical care and feeding of those at the camp and the hospital.

We also appreciate the constitution of the judicial commission of inquiry.

We appreciate the gesture of everybody that supported us, particularly, the Muslim Council of Adamawa State. May Allah SWT reward them abundantly.

DEMANDS OF HAUSA/FULANI COMMUNITY OF TINGNO:

The Hausa/Fulani of Tingno Community hereby demands as follows:

1. The immediate release of all those who are currently under detention by the Adamawa State Police Command unconditionally.

2  We call on the Judicial Commission of Enquiry constituted by the Adamawa State Government, to investigate the remote and immediate causes of the crisis and make just and fair recommendations to the government for implementation.

3. We call on the constituted authorities to, upon the completion of the judicial commission’s work, arrest and prosecute all culprits who proved to have a hand in the crisis.

4. We call on the Adamawa State Government and Lamurde Local Government to as a matter of urgency, resettle the destroyed communities and compensate fully all the losses incurred by the victims.

5. We call on the security agencies in the state to live up to their responsibilities and to do their work as truly expected of them devoid of bias, discrimination and injustice. Particularly, on the Tingno crisis.

6. We call on traditional leaders, especially His Royal Majesty Hama Batchama, the Paramount Ruler of Batchama Kingdom to maintain their traditional role as custodians of peaceful coexistence in their domains and not to be passive about serious issues, especially those that are likely to breach the peace and fundamental human rights of the citizenry.

The Hausa/Fulani of Tingno Community will continue to be law abiding, will equally do everything possible to maintain peaceful co-existence with all other tribes in order to maintain law and order in Tingno, the state and the entire nation. We are ready to provide all necessary information to the constituted judicial commission of inquiry with a view to bring the culprits to book and provide lasting solution to the crises and restore peaceful co-existence in the Tingno community and the entire state.

Turn the legislators to part-time lawmakers, have a unicameral legislature to get out of bankruptcy, SLS suggests