AT Shehu Deceived By Defective Memory, Misfit Or Mischief Against Nyako – Media Aid 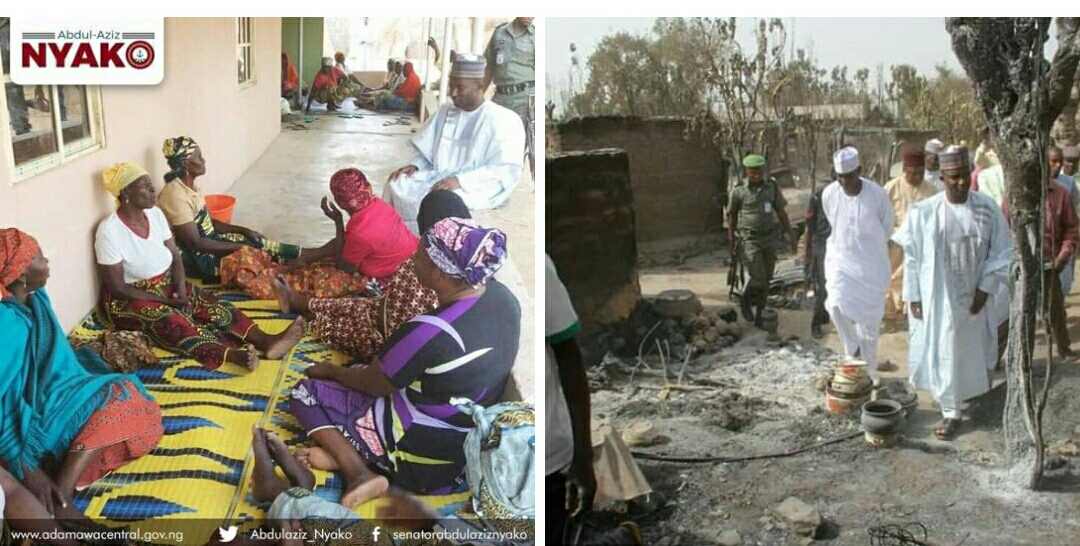 It appears that the prayer of the critical men of conscience for the need to show tolerance and restraint, is technically by circumstance conceived as criminal a thinking reconciliation as the echoed fire on the mountain keeps vibrating, generating thunderstorm by means of multiple hit-backs as feedbacks.

The critical thinking men with conscience considered it as unfortunate the AT Shehu forcing PDP into a war with words between the Nyako and the Fintiri over defection that ought to be cushioned with caution for the sake of peace, mutual coexistence, progress and development, not though without ruling out constructive criticism against any form of hyperbole aimed at deceit to exploit.

AT Shehu’s contribution to the debate on whether or not the “mass defection from ADC to PDP as governor Fintiri told the world, was a mere hyperbolic deception with it’s diversionary tendency in the face of insecurity, global pandemic and misgovernment, instead of issue based and constructive, was with over emotion taken catastrophic castigation by character assassination; accusing Sen. Nyako of heating the polity by smuggling Ethno-religious sentiment into the issue.

The position of arbitration by means of conflict resolution and reconciliation is betrayed. The media aid to Sen. Abdulaziz Murtala Hammanyero Nyako, Auwal Usman Galadima, while hitting back, described AT Shehu as one “suffering from bankruptcy of knowledge“, even though a lawyer and was called upon to mend his “leaking umbrella” rather than allowing his mouth to leak.

Galadima, has accused chairman of the People’s Democratic Party (PDP), in Adamawa State, Barr. A T Shehu of playing the burlesque.

The story narrated by AT Shehu, Galadima considered as insulting his principal, was fake; to borrow an old line from Shakespeare, “is a tale told by an idiot full of fury signifying nothing,” presenting him as one “suffering from bankruptcy of ideas,” urging him to instead of publicly embarrassing himself with unverified statements, concentrate in mending his leaking umbrella.

“It is highly regrettable that a high profile politician of the calibre of AT Shehu will stoop so low and engage in mudslinging and distortion of facts to score cheap political goals.

“Sen. Nyako will naturally ignore such personalities. However, it is our responsibility to prevent the good people of Adamawa State from being manipulated and misled with cheap lies and propaganda by shameless people.

”It is a fact that PDP is notorious in resorting to the use such diversionary antics to cover their abysmal performance in office,” Galadima said.

According to him, contrary to the myths and half truths being peddled by Shehu, the truth is that as a war veteran, Nyako knew the value of peace and he has throughout his tenure, worked towards its establishment both in Adamawa Central he represented and Adamawa South Senatorial Zone.

”In response to such fictitious allegations, it is important to educate the party chairman who seems to just appear in political space as a result of recovery from long term hibernation.

”In January 2016, there was an ethno-religious crisis between Fulani and Bata around Kor-Goron axis of Girea LGA; scores of lives were lost, hundreds were injured and properties including houses, livestock and farmlands were destroyed.

“It was on record, Sen. Nyako was the first Government official to visit the the affected villages five days after the attack despite the obvious security risk.

“Sarkin Matasan Bata, Lunguda, Mbula and PP Elisha were among his entourage. They inspected the villages and drove 20km down to Goron on a quiet deserted road littered with decaying human corpses and burnt settlements to meet Late Maijimilla Kefas. It took their combined efforts to nip in the bud, a reprisal planned by some bereaved Goron youths.

”The Senator tasked the Sarakunan Matasa to locate all the Bwatiye youths and calm them down. It took them one month to achieve that. PP Elisha and Late Lokodum were asked to talk to Bata elders and organise a meeting. Sen. Nyako on his part, was able to invite all the Fulani Ardos within that axis and intervene.

”Later on, an expanded reconciliatory meeting took place and lasting peace was brokered. The senator thereafter, got some relief materials for the aggrieved communities. All thanks to the prompt response and generosity of NEMA,” he said.

Galadima noted that just as he toiled to establish peace in his constituency, Sen. Nyako has also joined hands with his counterpart representing Adamawa South, Sen. Abubakar Mo-Allahyidi to also proffer solutions to the perennial farmers/herders stripe in the zone.

”On the issues of crises on the southern zone, although a senator is a universal citizen, it’s important to set records straight; Sen. Nyako had never represented the good people of southern zone in any capacity.

”However, for his undiluted love and concern for the well-being of the generality of the good people of Adamawa State, he’s been everywhere connecting with the people.

”In his capacity as the chairman senate committee on special duties, he facilitated prompt release of relief materials by NEMA, which were distributed to the victims.

”Later on, the senators proceeded to the palace of Hama Bachama where they were joined by the Inspector General of Police.

“They discussed and mapped out effective strategies to curtail the menace of the perennial farmers and herdsmen clashes and other security related challenges affecting Numan federation and the state as a whole.

”It is important to note that Sen. Nyako is a silent achiever who doesn’t believe in politicising his contribution on security related issues.

”To the records straight, Sen. Nyako retired at the rank of Commodore in Nigerian Navy. He joined active politics in 2013 after registering with ANPP at Gwadabawa Ward, Yola-North LGA under the chairmanship of Alhaji Saleh Maizuma.

”He contested and won the senatorial seat of Adamawa Central under the platform of APC in 2015. How did he then benefitted from the PDP that he was never a card carrying member?

In 1999, when PDP came into power, Sen. Nyako was doing well as a young Naval officer in Lagos.

“In conclusion, PDP is advised to quickly switch into the business of governance and heed to the advice of the senator, which was objective and devoid of malice and sentiments,” the statement added.

The new twists in relations between Nyako and the Fintiri led PDP government, rooted its ugly head after the government of the state claimed that thousands of ADC followers have defected to its fold, a move seen by Nyako as a wily tactic by the government to de-market his party.

In response to the development, Aziz Nyako has on his Facebook page excoriated the government accusing its officials of fiddling while the state is being consumed by the twin evils of social insecurity and communal clashes without the government doing anything substantial to nip the challenges in the bud.