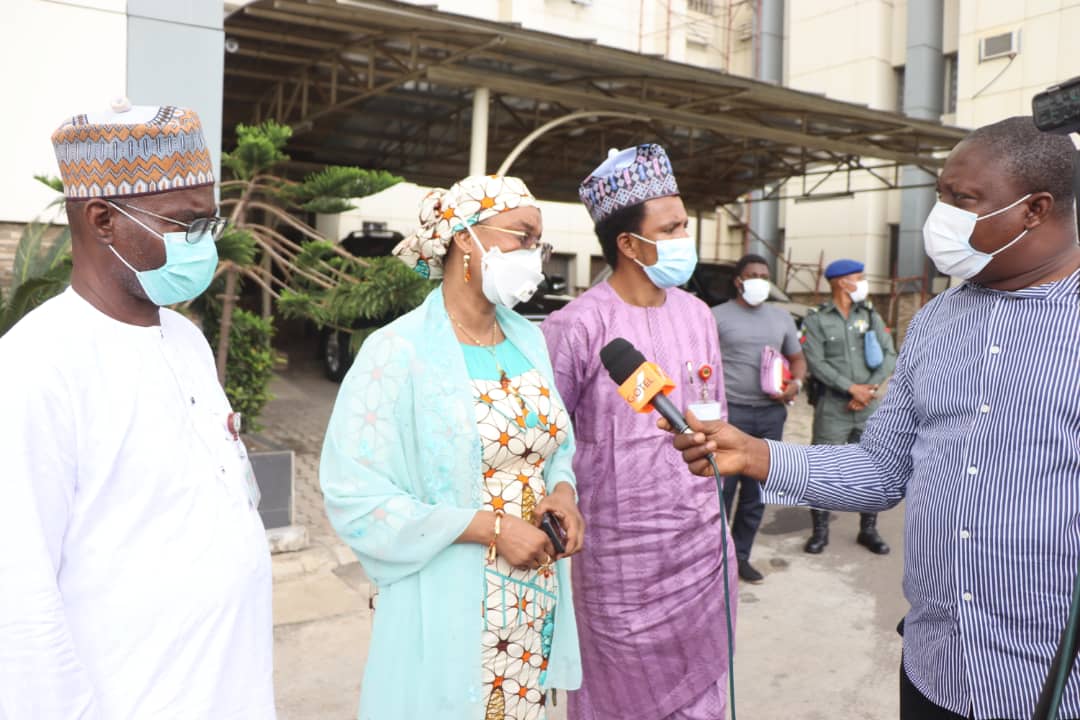 Senators representing Adamawa state; Aishatu Dahiru Ahmed (Binani) APC, central senatorial districts, Ishaku Elisha Abbo (Cliff) PDP, northern senatorial district and Binos Dauda Yaroe, PDP, southern senatorial district, have not seen it any worthy engaging in the war of words, with opposition, in the propaganda of defection as the language of deception in “democrazy” but to unite in demanding for more projects, prospects, progress and development to the state, defining dividends of a refined democracy.

The trio Tuesday, paid a courtesy call on the minister of works and housing, Babatunde Fashola to commend the federal government for the recently approved road projects that were abandoned for over four decades and to demand for the speedy completion of other rather awarded but but remained uncompleted road projects in the state.

The Senators were led by the lone lady, also the lone APC member, Sen Binani, for the courtesy call on the minister.

Below is the full text of the senatorial remarks:

REMARKS BY SENATOR AISHATU DAHIRU AHMED (BINANI) DURING A COURTESY VISIT  BY ALL ADAMAWA STATE SENATORS TO THE HONOURABLE MINISTER OF WORKS AND HOUSING ON 29TH JUNE, 2020 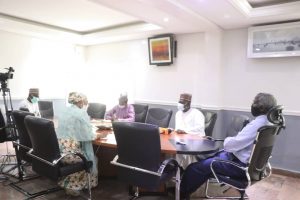 Hon, Minister, the three of us with you this afternoon are Senators from Adamawa State.

Two of my colleagues are PDP and my humble self APC. But at the Senate, party difference is secondary to us, because we all swore and agreed to work for Nigeria, to uphold, protect and defend the Constitution.

Adamawa State as you know, is one of the states that lack virtually all modern day infrastructure except for the Airport. Therefore, any little gesture extended to the state excites us.

So we are here on behalf of the good people of the state to say thank you for the recently approved contract for the reconstruction of Jabbi-Lamba-Belel road that was left unattended to for 47 years and also Mayo Belwa-Jada-Ganye Toungo road, which you graciously flagged-off in the 4th quarter of 2018.

Hon. Minister, while we thank you for this singular gesture, like Oliver Twist, we are asking for more attention on the quick completion of many federal government road projects that have remained uncompleted for several years like Cham-Numan-Numan Jalingo Road and at the same time plead, request and beg you to consider many other federal roads and bridges that are almost collapsing, for example the Mararaba Fufore-Sebore-Karlahi-Mayo Chanchi for which a request has been submitted to your office, along with others, which we will in due course provide to your office across the whole state.

It is a fact, Hon. Minister, that our state borders the Republic of Cameroon. Due to collapsing road infrastructure of federal roads in Adamawa, many communities find it easier to move their goods and other commodities into Cameroon than ply our roads to the urban centres in Adamawa.

Adamawa state is essentially an Agro-based state; the rehabilitation of federal roads will boost agriculture, improve economic activities and provide employment for our people, thereby reduce and eliminate insecurity completely and promote development.

We submit this to you Hon. Minister for your kind consideration, and say thank you.

Please accept the assurances of our continued high regards and consideration. 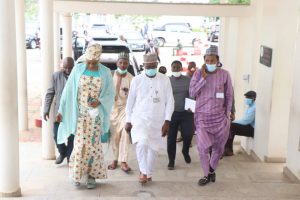