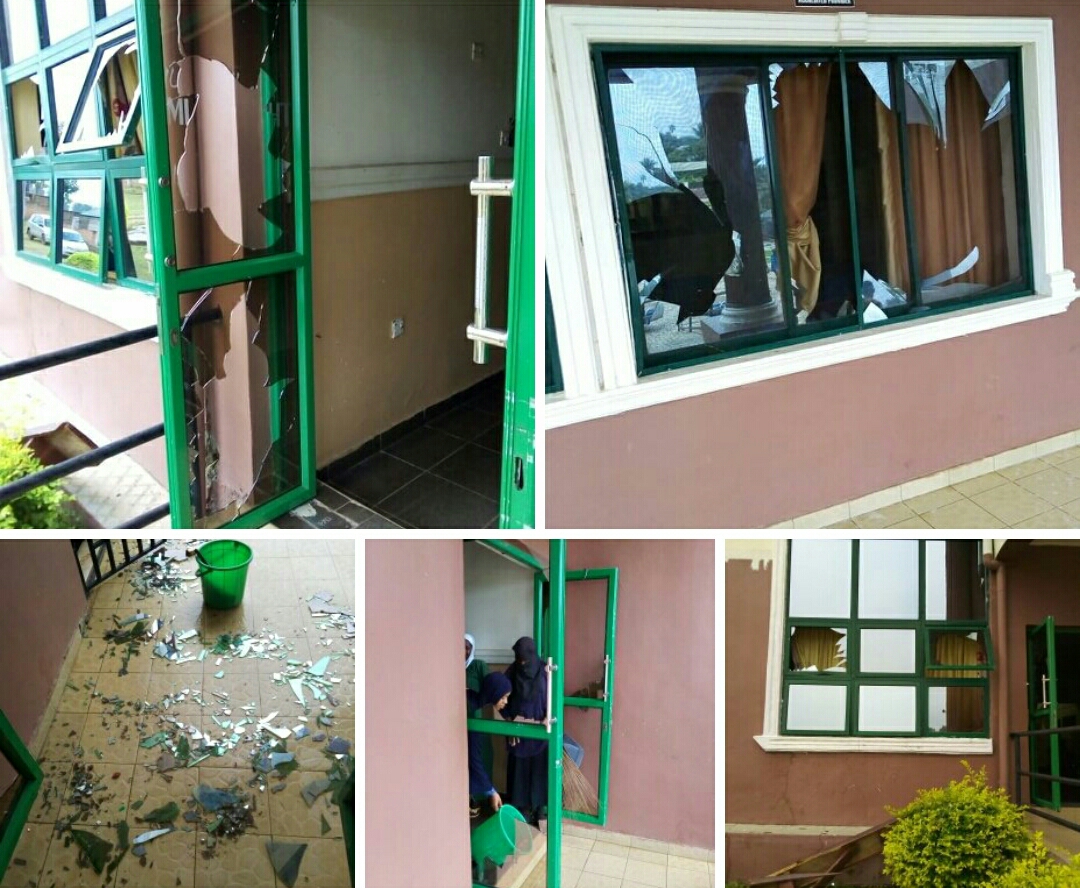 * Where kindness and compassion are compensated with destruction with impunity, make an ingrate script

A thug beyond Amotekum called Ayo, has by way of appeasing his gods, perhaps for his savage, rather the buried barbaric ancestors great beyond to give his dead brother a warm reception, descended into a hospital where he deposited unconscious brother expecting some kind of seeming heretic miracle for an impossible recovery, to not only destroy it but to also threaten the patients that some of them would accompany his brother for a befitting reception great beyond

The compiled report has it that the scene was Muslim Hospital, Ede, Osun state

the hospital was on Friday, June 27, subjected to destruction by a punk named Ayo, under the DPO and Ojo’s watch. Ojo is the chairman of Ede south local government.

Being a Muslim controlled hospital, it operates on the basis of saving life first before any charge could be made for treatment.

The doctor on duty rushed to attend to Ayo’s brother. He later quickly sent for the proprietor of the hospital, Dr. Ma’s’uud Akanbi. The duo tried to save the life of the patient but to God is both the life and death; the patient’s time was up.

The doctor invited to explain to Ayo the deceased brother they tried but could not keep the emergency patient alive. Before he could finish explaining in commiseration, Ayo mercilessly wrestled the unsuspecting doctor, smashing hard to the ground, perhaps with the intent to end his life.

The punk further got hold of an iron he used to break all glass windows in the health facility after he must have injured unjustly the medical doctor.

Patients on admission were not to be spared. The punk has scared them with death threat, saying that he would make sure his brother gets some companions to join his transitional journey to great beyond.

The MD of the hospital promptly alerted the DPO and the chairman of the council but the duo responded by coming rather helplessly, making a the unfortunate scene of the sinful appear hopeless.

The duo could not stop the threat and the destruction by the seeming demented.

The DPO would only be heard saying, “Ayo, it is okay like that!”.

On his part, the chairman of the Council could only volunteer a suggested voice that “it is only Baba Timi that can stop him.”Baba Timi is the king of the ancient town.

The punk continued wrecking havocs until he was satisfied. There was no attempt to arrest him. There was also no Amotekum the regional vigilante for rescue operation.

The punk Ayo, returned to the health facility in the night demanding for the corpse of his brother.

The CMD insisted on carrying out post mortem test on the body to ascertain cause of his death due to the suspicious circumstances surrounding the death of the patient.

However, authority from God knows what level of the above was eventually said to have directed the release of the corpse to Ayo without questioning.

A week after, Ayo is still working free; joibg the league of the above the law; the commissioner of Police is yet to respond even by way of statement, to the insecurity in the hospital earlier reported.

This hospital is a pride of the entire Muslim Ummah of Osun state, though it serves everybody irrespective of faith.

Imagine the scenario; what could have been the reaction If the hooligan had succeeded in killing either Dr. Akanbi or other patients in the hospital, would he have gone scot free?

Why did the DPO and the chairman of the Council, not get the thug arrested, is it owing to the spirit of obe-of-us-ness?

The DPO was said to be the same officer behind the release of the corpse and the car that Ayo the punk conveyed his near lifeless brother to the hospital.

Why the silence from the appropriate authority?