I received N5, 000 for killing 7 people including a medical doctor in Zamfara – bandit 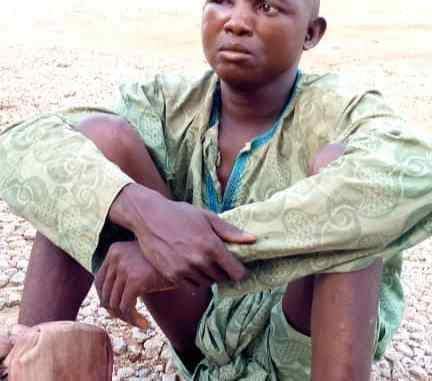 Operatives of the Zamfara State Police Command have arrested a 30-year-old suspected bandit Abubakar Namalika who confessed to be among those who killed one Doctor Okpara Enoch, a consultant with the Federal Medical Center, Gusau, Zamfara state.

He said he got N5,000 for killing 7 people including the Late Dr. Okpara.

The suspect made this revelation while answering questions from Journalists shortly after he was paraded by the Zamfara State Police commissioner at the Command headquarters in Gusau on Monday.

According to him, one Shehu Bagewaye their gang leader sends them to kidnap innocent people but gave them meagre amount after collecting ransom.

“Since I joined the bandits group under the leadership of Shehu Bagewaye, I personally used my Ak47 Riffle and killed seven people in Dogon Kade and Gidan Badda villages when we launched attacks differently,” Namalika confessed.

He also confirmed to the newsmen that he was among the five people who attacked Late. Dr. Okpara Enoch in his residence and gruesomely shot him, matcheted and set him ablaze after he refused to give them money.

“I am among those sent by our gang leader, Alhaji Shehu Bagewaye to kidnap Late Dr. Okpara at his house in Mareri area here in Gusau. When we asked him to give us money and he told us that he didn’t have it, we killed him, set his body ablaze and left the immediately,” Namalika stated.

However, the Commissioner of Police Usman Nagoggo said that the suspect confessed to the crime and has given the police privileged information about his group members’ hideouts, adding that he would be charged to court after investigation.

“Shehu Bagewaye was among the repentant bandits during the peace process and even handed over about four riffles to the state police command”. CP said.