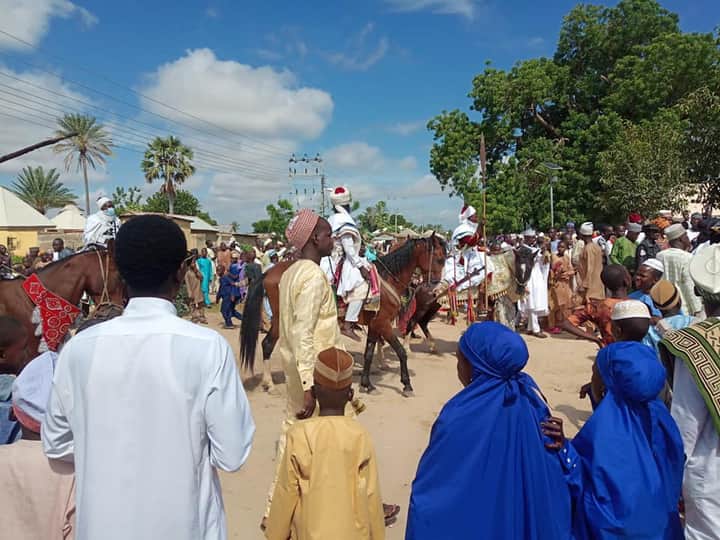 Lawmakers faithful to the atrocity of Bindow, the former governor of Adamawa state, orchestrated to cause dissention for anarchy to the history of monarchy in Jalingo-Maiha, are those who stand surety before the security, for the impostor Idi Usman Shehu to continue his romance with the contempt of court and executive orders in Jalingo-Maiha, the you in Maiha revealed to the Periscope reporter.

The lawmakers; Jafar Magaji APC, representing Mubi south, Mubi north and Maiha constituency at the lowers house of the national assembly and Isa Yahya APC, representing Maiha local government at the state assembly, were alleged to have assured the commissioner of police, Adamawa state command, shouldering responsibility as well that there would not be any crisis in Maiha if Idi the self-claimed district head was allowed to be in Jalingo-Maiha for Eid El-Kabir celebration.

Idi the impostor, in company of Jafar the supporter lawmaker, said to be acting on the script of Bindow his master, arrived Jalingo-Maiha unceremoniously at night on Thursday and the duo observed the Eid prayers in the morning.

The impostor with a yet to be withdrawn by the Emirate Council, red gown body guard, instead of stooping so low to the level of a submissive subject, stupidly paraded himself as district head in pomp and pageantry, with a procession of the possessed by pomposity, products of poor reasoning, seeming riotously insignificant followers, dancing to the drumbeats that sounded the announcement of the impostor playing a ceremonial monarch, lacking the skills to steal the day, to attract aristocratic not ghetto-like attention.

The Periscope investigation can reveal that a letter from the Adamawa Police Command, addressed to the Emir, was on Thursday, delivered to the Mubi Emirate Council against Idi Usman Shehu, currently on bail, still having criminal charges before the law filed by the commissioner of police and is restrained from parading himself as district head, to be allowed to be in Jalingo-Maiha to continue his arrogant romances with the contempt of court and executive orders.

The duo of lawmakers; Jafar and Yahya, were said to have conceived that their political carriers would be terminated in their constituency should they fail in the complicity to the anarchy breeding activity of Idi the impostor. “It’s what informed their playing surety for Idi to be in Maiha for Sallah celebration.” The youth in Jalingo-Maiha would say.

The duo’s lines were not going through when the newsmen called to confirm the allegation.

The smiling sage simply said “It’s the time getting closer,” explaining that Idi as a citizen could be in Jalingo-Maiha but never would he ever, as a district head.

“It is the people and the palace that constitute the monarchy, not the mob of Mammon that cause havoc to the faith and the professed faithful in a Mosque during Friday prayers.

“The palace remains a no going close to place, for the impostor.

“Anybody lacking attitude can be an impostor in any community lacking legitimate leadership for more than six years. Just coin as similitude to a well built, fully furnished house that is left abandoned for six years; you can imagine the cracks that can invite all manners of devil for all evils. Fibroid lies in the womb that is  left barren for a cancer womb when left untreated; an uncompromising law, effective and efficient leadership make the remedy,” the sage would say.

The Periscope has called to confirm from the PPRO but the call was not answered; a text message was equally not replied as at the time of the press. The text message reads:

“Just called to verify whether or not it is true that Hon Jafar Magaji a house of representative member and Hon Isa Yahya a state assembly member, have jointly pleaded with the commissioner of police, to allow Idi Usman Shehu, currently on bail, still facing criminal charges before the law filed by the CP, yet keeps on playing the district head impostor, to celebrate Eid El-Kabir in Jalingo-Maiha, even though he is being by the law restrained.

Attack on Zulum: I swear Borno is not safe, Shehu cries out