Attack on Zulum: I swear Borno is not safe, Shehu cries out 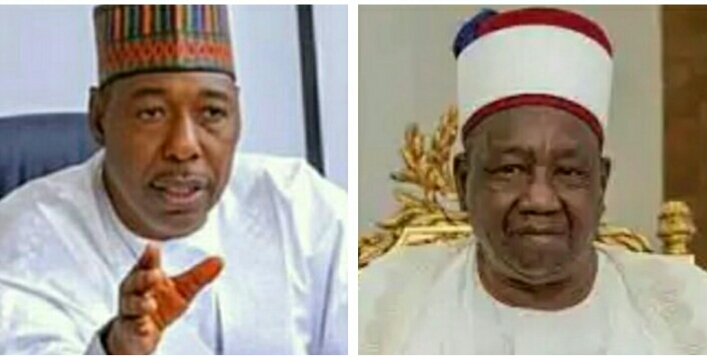 Mr Zulum who was in Baga, a deserted fishing town, on an official visit had to be hurriedly bundled into an armoured personnel carrier amidst sporadic gun shootings. It was generally believed that the attack was carried out by Boko Haram.

But the governor had a different opinion about the attack that threatened his life. To him, it was the conspiracy some elements of Nigerian soldiers who were out to sabotage his efforts in the state.

The governor had on Thursday while leaving Monguno town for Maiduguri told newsmen that those who opened fire at his convoy were soldiers.

The governor gave an analytic view of the event, which he concluded could not have been Boko Haram.

While paying a courtesy Sallah homage on the governor at the Government House Maiduguri, on Saturday, the second foremost northern Nigeria monarch concluded that safety of life and property is no longer guaranteed in the state.

“Your Excellency, we are not happy about what has happened in Baga the other time, it is very unfortunate and great pity.

“If a convoy of such highly placed person in the State will be attacked, I repeat, nobody is safe. The matter is getting worse; I urge everyone to raise our hands to seek Allah’s intervention,” Shehu said.

Shehu Elkanemi also used the opportunity to call on the people of Borno state to continue to “adhere strictly to all preventive protocols advocated by health experts on COVID-19 pandemic.

The Shehu also decried the high rate of tree cutting in the state.

He urged the state government to “take urgent steps in mitigating this dangerous act before it leads to a serious environmental problem.”

The monarch advocated for the “reintroduction of tree planting, which was a regular practice in the past.”

The state governor, Zulum, thanked the Shehu for visiting him even as he assured him of Government’s readiness to address the issues raised by him.