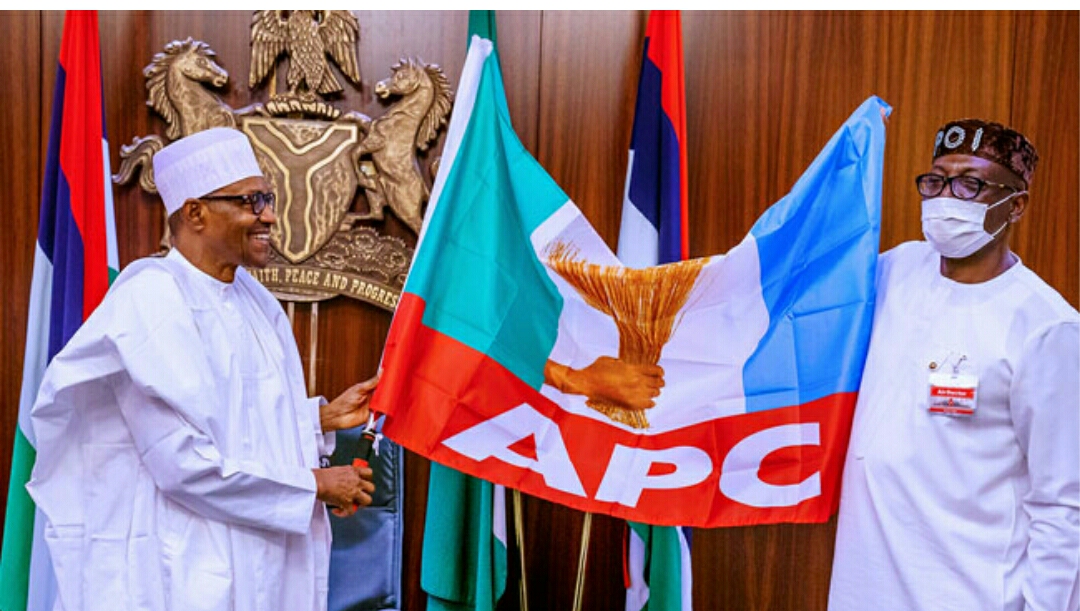 APC the ruling party and PDP the major opposition party are engaged in exchange of words considered as war on integrity ahead  of Edo 2020 gubernatorial election.

PDP accuses APC of presenting a candidate that is accused of corruption.

In a statement issued by the spokesperson, President Buhari challenges PDP to first withdraw the nominations of some of its governors and lawmakers before challenging APC against fielding in Ize-Iyamu.

Below is the full text of Garba Shehu’s statement:

President Buhari on Ize-Iyamu: To be taken seriously, PDP must sack its governors and senators

The Peoples Democratic Party, PDP, which has been struggling to clear its name from alleged deals with the underworld in Dubai and the United States has, to our surprise, found the voice to attack the anti-corruption war of the Muhammadu Buhari administration following the President’s endorsement of Pastor Osagie Ize-Iyamu, the All Progressives Congress, APC’s dashing candidate for the governorship election in Edo State.

Forgetting its own history and antecedents, the PDP said in a garrulous statement that “the President ought to have been aware that the Candidate is standing trial for corruption,” and then went on rant against the government’s war against corruption, alleging its failure.

Let PDP first withdraw the governorship nominations it gave to Ahmadu Fintiri and Bala Mohammed of Adamawa and Bauchi States respectively, before it opens its mouth and talk on the efforts of this administration in fighting corruption. Or else, it should shut its mouth forever and leave us to do what it dares not attempt.

Both PDP governors were actually on bail from criminal trial on several counts of fraud and embezzlement.

Justice A. R. Mohammed of the Federal High Court, Abuja, on Friday, July 1, 2016 granted bail to the former acting governor of Adamawa State, Ahmadu Umaru Fintiri. He was charged on June 30, 2016 by the Economic and Financial Crimes Commission, EFCC, alongside his company, Mayim Construction and Properties Limited on a five-count charge of money laundering to the tune of N2.9 billion.

In the case of Bala Mohammed, the PDP Governor of Bauchi State, the EFCC, on Wednesday, May 10, 2017, arraigned the former Minister of the Federal Capital Territory, before Justice A. M. Talba of the Federal Capital Territory, High Court sitting in Gudu, Abuja, on a six-count charge bordering on abuse of office, false declaration of assets and fraud to the tune of N864 million.

“Bala, while in office as minister, allegedly received N550 million as bribe from Aso Savings and Loans Limited with respect to some properties in the Asokoro area of Abuja.

“He is said to have corruptly abused his position as Board Chairman of Aso Savings by allocating four numbers fully detached duplexes and 11 numbers semi-detached duplexes valued at N314 million through the Presidential Taskforce on Sale of Government Houses, to himself.

“The former minister is also accused of making false declaration of his assets.”

Pastor Ize-Iyamu is being prosecuted by the EFCC alongside Lucky Imasuen, former deputy governor of Edo State, Chief Dan Orbih, PDP Chairman in Edo State and other leaders of the party in the state, Tony Aziegbemi and Efe Erimuoghae.

Under the country‘s laws, only the courts can convict. A suspect remains a suspect until conviction. But, if in the view of the PDP, a suspect is guilty as charged, then they must show examples by withdrawing the nomination of their governors and the party’s numerous Senators and other legislators standing trial in various courts of the country.

A party which 16 years in office destroyed the country’s economy and infrastructure has no moral authority to criticize the accelerated infrastructure development drive, largely drawing its energy from the Buhari anti-corruption campaign.

This clean-up drive by the President Buhari administration will only speed up with the ongoing investigations and trials.

The current administration’s cleansing exercise of the government, politics and economy in line with the zero tolerance for corruption, will not be distracted.

Senior Special Assistant to the President