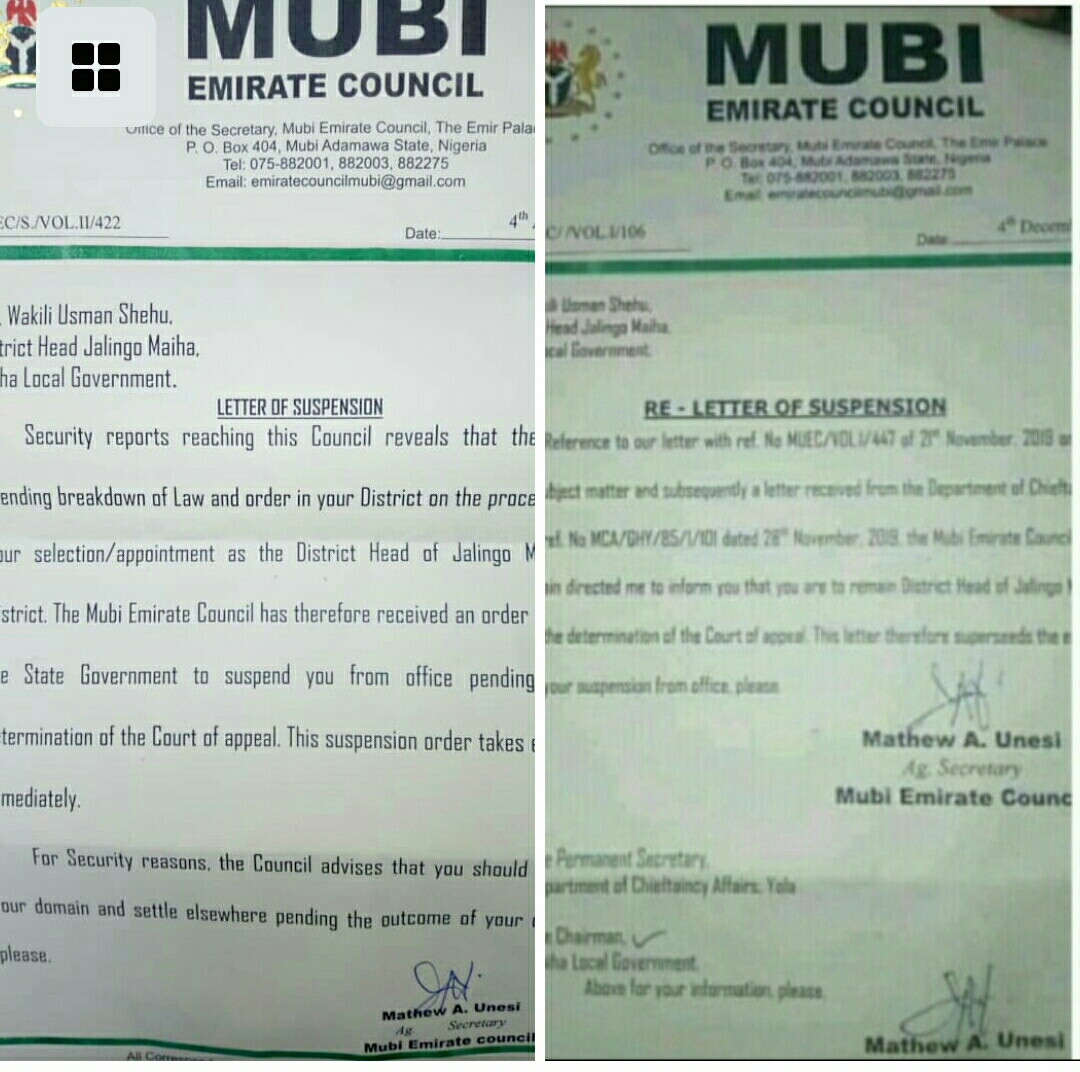 The electorates in Jalingo-Maiha District have celebrated with prayers, yet another but final suspension of Idi Usman Shehu acting as district head, from the play script he fantastically mastered but that which does not befit his role in the realm of legitimacy, written from the shadow of the chieftaincy office with the ministry of local government and chieftaincy affairs, against the court and executive orders, authored by a fantastical in insubordinate, personating by arrogating to self the function of the chief executive of the state.

Not befitting his character in the sense that the rehearsals and the acting have to be paid by the game player rather than being paid to play.

Suffices to say that there is no salary attached to the acting, yet unrecognised, seeming ceremonial district head, lacking a palace, not even market place spectators, far from being rigorously participating notoriety.

The news of the suspension and ban was suffocating to those who are delighted being entertained with the contempt of court and executive orders.

The court could go to hell – the entertainers to impersonation were heard to have vituperated – provided that a letter from the chieftaincy with the ministry of local government and chieftaincy affairs, without being directed by the chief executive would suggest in acting capacity district headship to be stage managed by an impostor.

They claimed that the letter from Mubi Emirate Council as directed by the state Governor, suspending their tragic hero from acting his tragic flaw; technically banning him from Maiha as well, was simply fake; a recorded figment of author’s imagination.

“But who’s the imaginary authority or the real author drafting a self figment of imagination, the Governor or the Emirate Council?” A literary critic would ask.

It only dawn on them that the legitimate authority that is intolerant to insubordination and impersonation has done with by declaring a down on their actor, the impostor when the Deputy Governor on his principal’s delegated duty, visited Jalingo-Maiha, the Maiha local government headquarters on Sunday, without their actor to play his seeming usual ceremonial district headship role.

The news event on the visit of the Deputy Governor is loading. Meanwhile, having commended Governor Fintiri for suspending the said against court order acting district of Jalingo-Maiha, the teeming electorates in both Maiha and Mubi have pleaded with the governor, through this medium, to implement the other part of the court order.

“The part that directs the governor to approve the appointment of Barr Mahmud Abubakar Suleiman, the heir to the late district head, as the legitimate district head of Jalingo-Maiha.

“The district head of Jalingo-Maiha is normally, a council member of the Mubi Emirate Council, holding the title and function of Ubandoma,” an elder in Maiha would explain.

Observant youth revealed to the Periscope reporter that those personalities who would be thought of as backing Idi, have started avoiding him, leaving only those who would only bark and backbite without biting, owing to the suspension development.

A sage in Maiha would explain that the person influencing letter writing to consider the character in district head acting capacity, is in distress, constrained by retirement.

The acting secretary with the Mubi Emirate Council is being substituted by the substantively appointed secretary. “No secretary for acting district head against court order’.

The appointment of Marafa, “the new district head of Mubi makes another discouraging drawback to the, he who has been in romance with the contempt of court and executive orders.

“I sympathise with those compressed minded few who are trying to suppress by rejecting the suspension letter that is served to Idi by the Emirate Council as directed by the State Governor.

“It appears that the compressed minded do not understand the meaning of leadership, good governance and the rule of law.

“The Governor is simply honouring the court order. I don’t know what are they honouring by rejecting the suspension of their actor or are they after denying peace and mutual coexistence in Jalingo-Maiha?” The sage with worthy projections that have been coming to pass, would present for a critical thought.

“The mark of difference is that the present government does not accommodate the Kannywoodian intervention in governance. The kind that harbours the monarchical dramatist. The ‘Yan Nanaye are without part to play any longer but the fantastic fans are yet to be in tune with the reality.

“Acting the contempt of court and executive orders is over, justifying the real not imaginary suspension letter,” the literary critic would articulate.