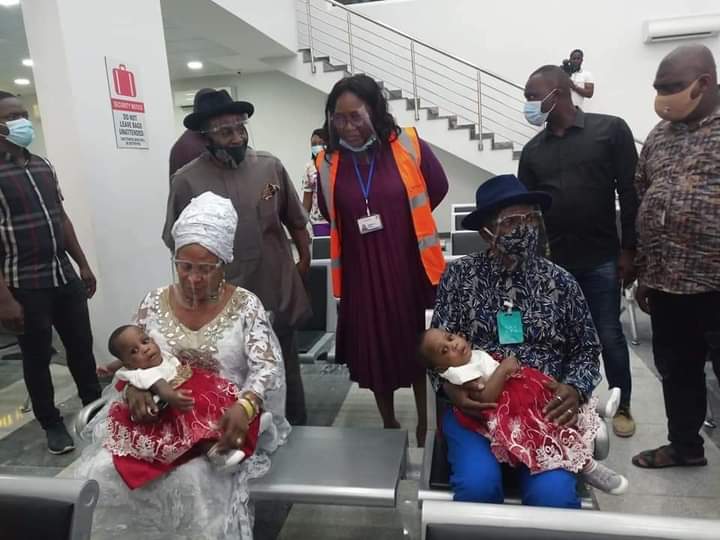 Bayelsa State deputy governor, Sen. Lawrence Ewhrudjakpo has received the Bayelsa-born conjoined twins who were flown back to the state over the weekend after a successful surgery at the Federal Medical Centre, FMC Yola, northeast Nigeria.

Describing the twins as special babies, the deputy governor said apart from crude oil, the state has achieved another remarkable historical feat by producing the first successfully operated Siamese twins in the South-south region of the country.

Wen. Lawrence, who promised to take responsibility for Baby Grace, one of the twin babies including her university education, assured the parents of the state government’s support to ensure their upkeep.

He made some personal cash donations to the parents, the medical team that carried out the surgery and delivery of the twins.

“It is history in the sense that these jewels of Bayelsa, the Niger Delta and South-south left our shores in helicopter and (today) they are brought back in a jet that landed on our own airport.

“It is also history because this is the first time we are having conjoined twins in the South-south that have been successfully operated who are from Bayelsa where crude oil was first discovered to enrich Nigeria even though we have not got enough benefits.

“But let me also use this opportunity to thank the President of the country, General Mohammadu Buhari, the Chief of Air Staff, Abubakar Sadique, the FMC Yola and your medical team in FMC, Yenagoa for your various contributions that have made the history we are celebrating today,” The Deputy Governor remarked.

Speaking earlier, the Chief Medical Director of the Federal Medical Centre, Yenagoa, Dr Dennis Alagoa, said Baby Grace and her sister, Mercy, were born to the family of Mr and Mrs Ayebanemi Raphael on the 12th of December last year at Nembe General Hospital.

According to Dr Alagoa, the Siamese twins were transferrred to his hospital a day after their delivery and were under intensive care until January 2nd this year when they were flown to FMC, Yola, Adamawa State for surgery.

The Chief Medical Director who also appreciated the Chief of Air Staff and the medical team of FMC Yola for their supportive roles, requested the state government to provide employment for the parents to guarantee the upkeep of the twins.

Fintiri commiserates with Atiku, Rukayya over the demise of late Lamido’s wife