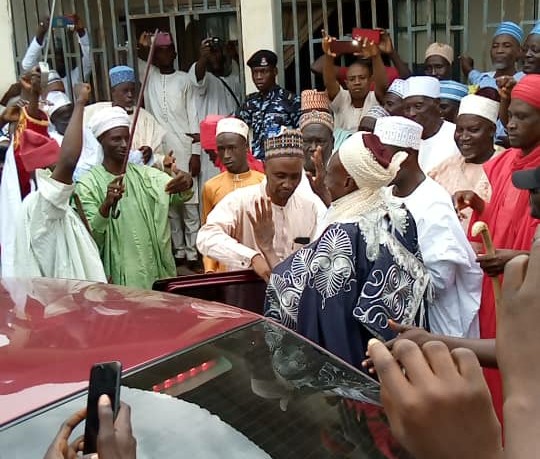 Jalingo-Maiha district, Maiha local government, northern senatorial district, Adamawa state, northeast Nigeria, has received the acting district head in good faith as exemplified by the amazing population that celebrated his entry into the district to defend the monarchy against hypocrisy, conspiracy, complicity, anarchy and demonstration of “dictatorcrazy”.

The acting district head, Alhaji Muhammadu Dalil Friday, expressed his delight with the warm reception accorded to him typical of the Madinah model, where he said that though he has rewardingly served as acting district head in Belel and Michika districts, there was nowhere he was accorded befitting reception with amazing peaceful and proudly celebration population than in Jalingo-Maiha District.

Dalil said he was not in Jalingo-Maiha to serve as an impostor and/or to conspire in translating any crafty script drafted rather hypocritically, his presence in acting capacity, delegated by the Mubi Emirate Council, was however, to clear a befitting path for the not to be coerced on people with dictatorial tendency but a legitimate heir, the people choice, who should be the God’s choice to take over the more than 6 years in wait stool as district head; a task he projected as near accomplishment.

Dalil commended the distinct for peaceful coexistence in spite of intimidation, urged for its continuity, sued for cordiality and cooperation and prayed against evil tendency, the landlord of hypocrisy, conspiracy, complicity and anarchy against the people and monarchy in Jalingo-Maiha district.

Dalil prayed that May Allah SWT expose and expel all the hypocrites and the anarchists in, from, away and out of Jalingo-Maiha district for peace to reign and the monarchy to be protected against any imposition of impostor in future.

Dalil’s prayer elicited popular response with an echoed chorus “ameen!,” which was extended beyond Jalingo-Maiha district.

Meanwhile, against those who bragged that their oracle diviners have declared that the jury would no longer invite for adjudication; the appeal court determination, the appeal court judge has however fixed Monday, September 7, 2020 for either final hearing or ruling between the former governor Bindow enforced on people appointed, squashed by a high court ruling and the legitimate, people’s choice, Mubi Emirate selected and endorsed by the high court ruling.

“How can one file an appeal against a judgement and will not want to have a determination of the appeal court on the matter in dispute?” Sage would in more of an expostulation asked.

The sage would articulate that although those conversant with the law would love to have had a full and total enforcement of court orders beyond politics and other considerations, “there’s still a recourse to the late Ubandoma’s projection.

“Ubandoma of blessed memory was a man of wisdom. He once tasked Dalil to do justice while in his would be capacity as acting district of, in handing over the stool to his heir “his second self,” after his death.

“It is only now that it occurred to people and Dalil himself, the projections and the spirit behind delegating Dalil to serve as acting district head,” the Sage would say.

Fintiri commiserates with Atiku, Rukayya over the demise of late Lamido’s wife