ADAMAWA: ACAR Calls On The Governor, Lawmakers To Actualise Promises Against Rapists 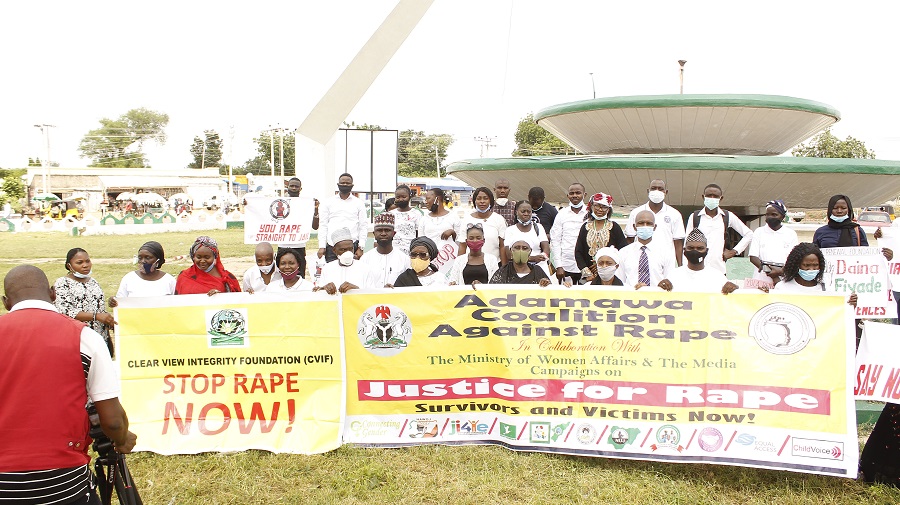 Adamawa Coalition Against Rape (ACAR), a coalition of the media, faith based and civil society organisations has called on the Adamawa state government, the lawmakers the police and the judiciary to actualise the promises made against rapists in the state.

The call was made Friday, during presentation on the one year anniversary of the march against rape, which was held at the police roundabout in Yola, Adamawa state, northeast Nigeria.

The participants, holding advocacy placards with inscriptions; “say no to rape”, “rape is a crime,” “no word for rape, only sentences”, “you rape, you go to jail”, “rape is evil”, went round the roundabout chanting the inscriptions before addressing the press.

Giving the background, in their separate speeches, they recalled that it was on Friday, 23rd August, 2019 that the awful news of an innocent 5-year-old girl raped and left to die in her pool of blood broke.

“It took a while to get someone to check her at the Hope Centre and she was immediately referred to the Federal Medical Centre, FMC Yola. The minor survivor received multiple grievous injuries.

“The survivor identified 19 years old beastly Abbati and he was taken into custody.

“The only news we heard after then was on 10th September, 2019 where the magistrate accepted his change of age downwards to 16 years and was quickly transferred to the Remand Home.

“What the public know about beastly Abbati is his boasts that he started visiting brothels at 16 years. The case is yet to begin,” the speakers lamented.

The coalition recalled with dismay, that one year later, despite promises made by HE the Executive Governor of Adamawa State to deal decisively with the rapists he considered cultists with their allies and the Right Honourable Speaker to enact law for stiffer penalty against rapists, nothing is yet to be seen on ground.

“We have had disappointing verdicts, personalised instead of ruled according to the graveness of the situation.

“An accused urinated on himself at one point and later boldly challenged the judge and he was eventually allowed to walk free.

“To Appeal was a hurdle as the appropriate persons refused to make the ruling necessary to file the Appeal. We have appealed and pray that justice is done,” the coalition lamented

The coalition added that with a great sense of loss and yet with a lot of hope she embarked on the march against rape on 18th September 2019, ahead of other state.

However while many states have already signed into law, solid sentences like castration and death sentences, Adamawa state government and lawmakers are yet to fulfill their promises against rape case that is currently soaring in the state.

* Kano – Death Sentence by Stoning, which was administered

The coalition has therefore appealed to the Adamawa State House of Assembly to do the legislative needful, urgently too.

The coalition equally hoped that the governor would present an Executives Bill with life shattering consequences to discourage any form of rape in the state.

“We look forward to the BREAKING NEWS: ADAMAWA HAS PASSED A LAW TO CASTRATE AND LIFE IMPRISONMENT AGAINST RAPISTS,” the coalition prayed.

While commending the media for aggressive enlightenment and sensitisation campaign against rape, the coalition has equally called on the parents, religious and traditional leaders against the conspiracy of silence.

Rapists must be named and shamed rather than being shielded. Rape case should also not be frustrated by threatening or luring the survivor and/or the family to either conceal or withdraw their case in the course of investigation before forwarding for litigation and/or before the law.

“People of all age brackets should be instructed to begin to guard their thoughts as enjoined by their holy books since rape is a product of overcharged sexual desires and lusts.

“More Civil Societies and NGOs should be formed to wage war against this notorious evil in Adamawa in particular and Nigeria as a whole.

“All rape victims (survivors) should be shown much love and care to reinvigorate their selves-image” the coalition advised.