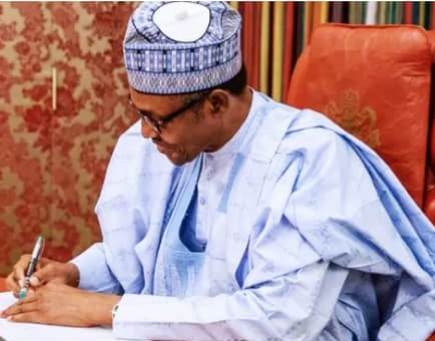 President Muhammadu Buhari has bowed to demands by approving a special salary scale for teachers in Nigeria and reviewing upward their retirement age to 65 years. This takes immediate effect.

Minister of Education, Adamu Adamu, who represented the president, made the announcement on Monday on the occasion of the 2020 World Teachers’ Day with the theme: ‘Teachers: Leading in Crisis Reimagining the Future.’

Also approved by Buhari is a “special pension scheme to enable the teaching profession to retain its experience and talents as well as extend teachers’ retirement age to 65 years and the duration of teaching years to 40 years.”

Daily Trust reports that there had been a persistent complaint by teachers that they were the least paid, saying the development was responsible for the falling standard of education in the country.

The new package for teachers is coming days after the NLC and TUC threatened to embark on a nationwide strike over the increase in the cost of petrol and electricity but the FG persuaded them to shelve it with a promise to cushion the effects.

Most teachers draw their salaries from monies accrued to states and local government areas who have been crying of dwindling income.

Efforts to hear from them as to whether they would be able to implement the new package for teachers were not successful. State governors had on many occasions countered decisions taken by the federal government when asked to implement certain policies.

President Buhari has also approved the building of low-cost houses for teachers in rural areas and the sponsorship of teachers just as he assured of prompt payment of salaries and timely promotion to eliminate stagnation. This is in addition to the Teachers Conversion Programme (TCP) and ICT training to mitigate the current dearth of qualified teachers in the school system, he said.

“Teachers have the power to shape and reshape the lives of young people and help learners to enhance their potentials. Only great teachers can produce excellent people and students that will make the future of our country great,” Buhari said.

The president’s speech sighted by our reporter carried some directives:

“The minister of education is hereby directed to ensure an accelerated implementation of these policies and measures in collaboration/liaison with states/local governments, the Office of the Head of Civil Service of the Federation, the National Salaries, Incomes and Wages Commission and of her relevant agencies in the system to enthrone a culture of competence, discipline, dedication, increased learning outcomes and better service delivery in the education sector in Nigeria.

“In order to attract the best brains into the teaching profession, the policy of encouraging the best graduates to take up careers in teaching is hereby restored.

“The reintroduction of bursary award to education students in universities and colleges of education with the assurance of automatic employment upon graduation is now a new policy.

“The payment of stipends to Bachelor of Education students as well as granting them automatic employment after graduation is now government policy. The Tertiary Education Fund (TETFUND) will now fund teaching practice in Universities and Colleges of Education.”

It added that there should be a “special salary scale for teachers in basic and secondary schools, including provision for rural posting allowance, science teachers allowance and peculiar allowance.”

Our correspondent reports that the announcement was received by cheers from teachers who had been making the demands for years.

In his remarks, Minister of State for Education, Chukwuemeka Nwajiuba said the award aimed to inspire resilience in the strife for excellence, institutionalise high productivity and ultimately boost quality education.

He said the picture of a teacher in the 60s and 70s was that of a smart, stern but friendly look that connoted discipline and fear, know everything as well as the solution to everything.

Our correspondent reports that most of the promises made by the federal government were part of the demands presented by the President of Nigerian Union of Teachers (NUT), Nasir Mohammad Idris, who had listed six priority areas.

Some of them include an upward review of the retirement age of teachers and education officers; establishment of a Teachers’ Salary Structure (TSS), the establishment of the National Secondary Education Commission for proper coordination and effective management of secondary education in the country; implementation of a new minimum wage for all teachers including primary and secondary school teachers in the Federal Capital Territory (FCT); and approval and implementation of the 27.5% professional allowance for teachers of Federal Government Colleges.

However, when contacted to shed more light on how they received Monday’s promises by the federal government, the NUT Secretary-General, Dr. Mike Ene, said the gesture was in conformity with what they wanted “but what we don’t understand is that some of these approvals need to be back by law.”

According to him, “The president who is interested will magnanimously approve it and wash off his hands like the Pontius Pilate. It now befalls on the authority, the necessary ministries like the ministry of education, salaries and wages commission, ministry of finance, NUT and other stakeholders who are now going to make sure that the necessary bodies who will perfect it to become law, cooperate and sign relevant documents to become all of them to become law.”

“It is one thing to make pronouncement but the problem is actualisation,” he said. Contacted to speak on the likely beneficiaries, the Director of Press and Public Relations of the Federal Ministry of Education, Ben Bem Goong said the new salary structure cut across the states and that the minister will work with the governors and other stakeholders to bring it to fruition.

He said no percentage was agreed on yet but that a committee would be set up to look into it.

However, some retired and serving teachers have called for what they called “cautious optimism” until the governments at the federal and state levels fully implement the mouth-watering package.

“Teachers must pray harder for the promises to be implemented because some of us dedicated the whole of our productive life to teaching and ended up with nothing despite unending promises especially during occasions like this,” said Malam Musa Amiru, a retired teacher in Katsina.

“James John, a secondary school teacher in Jos, said he hopes to be one of the beneficiaries. “But my worry is how they will get the money to do it,” he wondered.

“Look at it this way: university teachers have been on strike for a very long time and non-academic staff joined them yesterday. Up till this time, many states are finding it difficult to pay the N30, 000 minimum wage and therefore, I don’t know how our own will work out,” he said.

“It is a welcome development. This is what we have been expecting years ago. We are among the poorest set of classes in Nigeria. My major problem now is the implementation of the increment,” said Malam Salihu, a school teacher in Jos.

Mr. Adekunle Adegoke, a private school teacher in Lagos said it was a welcome development for public tutors, but quickly added that the gesture was one-sided and urged the federal government to look into the issues of the welfare of private school teachers whom he said constituted 80 percent of tutors in Nigeria.

Mohammed Salis, a primary school teacher in Kaduna, said he had doubts the salary scale increment would have any impact on Kaduna teachers.

“I don’t think the salary scale approved by President Buhari will have any impact on teachers working under state government like myself. This is because we are employed as teachers by the state governments but it is the local governments that pay our salary and they don’t have money,” he said.

As part of activities marking the World Teachers Day, a teacher in Amuse Grammar School, Ikere, Ekiti State, Henry Ashibiojo Olaoluwa won a car after he was declared the overall best teacher to clinch the presidential award of excellence.

Fintiri Felicitates With Bala At 62