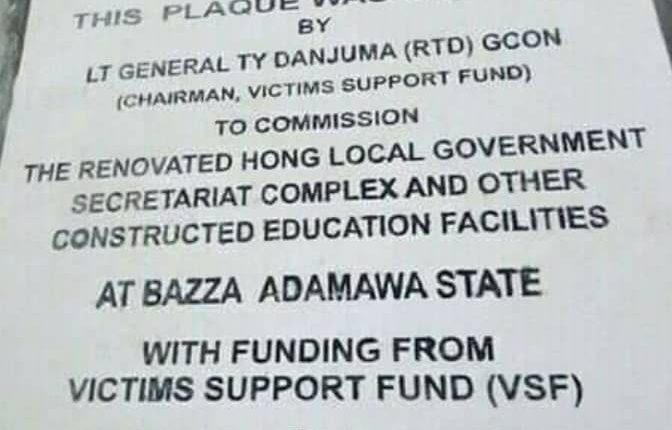 Hong was one of the local governments of the state hitherto occupied by the activities of Boko Haram insurgency before post 2015 positively changed the security narrative, thereby restoring public confidence in the Buhari led APC government.

Hong happens to be among the local governments that have received the federal government intervention through Victims Support Fund (VSF) to cushion the devastating effect of the insurgency.

The local government secretariat complex that was destroyed was renovated. Other education facilities were constructed at Hong empowered by the Victims Support Fund VSF.

Laudable is the intervention however, the plaque that was unveiled to that effect by the VSF chairman, LT General TY Danjuma (RTD) during the commissioning at the LG secretariat on October, 6, 2020 has received critical thinking community condemnation for spelling “Bazza” instead of “Hong” as the local government headquarters, demanding for the amendment of the contents of the plaque.