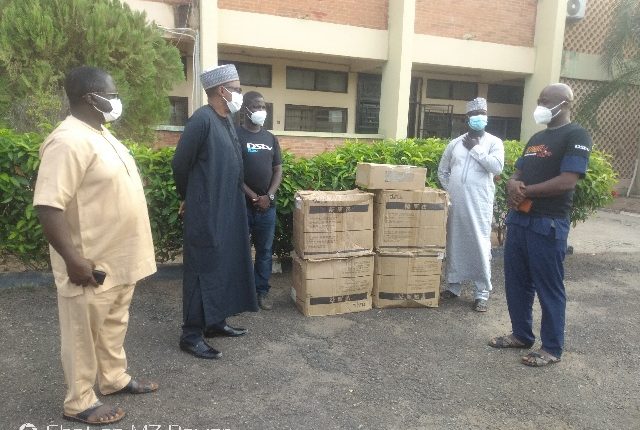 Multichoice has donated four cartons of disposable jackets and a carton of M5 facemasks to Federal Medical Centre, FMC Yola.

Presenting the items, the leader of the delegation, Rotarian Igwe Mathew said Multichoice is happy to be associated with FMC Yola as both client and customer.

Igwe acknowledged that the health facility, no doubt rendered effective and efficient, client centred healthcare services, adding that the client centred was exemplified in the mounting of television at the strategic service windows, like some offices, patient waiting areas and admission wards, among other places, translating the SERVICOM recommendations.

The televisions, Igwe has rightly observed, utilised satellite services and that which DSTV offered efficiently and effectively.

Sen Binani Sponsors A Bill, Leads Debate On Establishment Of…

Therefore, as a corporate social responsibility, keying to the collective undertaking in flattening the Covid-19 curve, Multichoice has been donating to medical facilities.

Receiving the items, the Medical Director, FMC Yola, Prof. Auwal Muhammad Abubakar, having thanked the Multichoice management for the donation, commended the efficiency and effectiveness in the DSTV services being rendered by the Multichoice.

Prof. Auwal has assured that the medical items would be utilised for the purpose to which the donations were made.

MD Flags Off Vaccination Against Covid-19 In FMC Yola