* In Maiha, peace is our uncompromising treasure; a pillar that strengthens the love and our unity in diversity - LG Chair 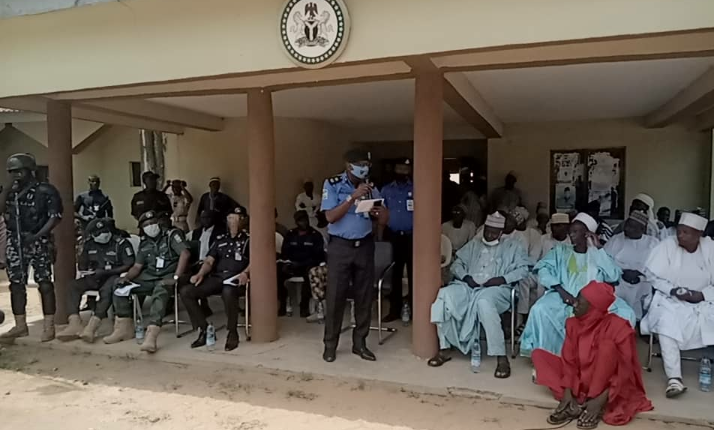 * Charges police and other law enforcement agencies to be professional

* We should harvest crops not violence this season – CP

This is a sensitive period in Adamawa state and indeed most parts of the country where farmers and herdsmen share neighborhood; the period of harvest marking the end of the rainy season.

In addition to the clashes between farmers and herdsmen, are the banditry, rape and kidnapping for kill or for ransom in not only the towns or at homes but also at the farmlands.

Although the Adamawa Police Command, along with other security agencies have been trying to address the situation by arresting alleged culprits across the state, so many farmers have developed cold feet that resulted in abandoning their farmlands uncultivated to able to make a self-security against harassment, intimidation, exploitation, oppression, subjugation and even annihilation.

Farming remains one of the most fundamental advocacy of the present leadership in the country. However, when there is insecurity with impunity, where farmers are kidnapped and/or killed with hideous cruelty, typical of the Godless society, there is no obvious that the second call to green revolution will hardly be ever hearkened to.

The Periscope has exactly two years ago, when herdsmen, suspected to be foreigners, unleashed violence against farming community in Bole Ward, Yola south local government area, central senatorial district, Adamawa state, northeast Nigeria, called for political will to end the seeming savagery, where in part she says:

“Something proactive needs to be done; community meeting and prompt reporting of such incidences to appropriate authority in avoidance of further clashes of, rather than shared harvest between farmers and herdsmen.

“The story of Cain and Abel, recapitulated rather than told in the Holy Scripture, should only serve as a lesson rather than having the rivalry reenacted.

“Farmers use cattle to plough or tilt their farmlands, benefit from fertilizer produced by cow dung and even convey their harvested farm produce back home or to market for sale.

Cattle graze from the farmlands after, not before the harvest as much as the herdsmen feed from the farm produce.That is how shared harvest works for mutual coexistence.

“Farmers and herdsmen ought to be birds of the same feather that flock together; they are both farmers meant to live in peace and harmony rather than remain in pieces as avowed enemies”.

With two weeks after the Police/Community engagement; a framework to preventing conflict between herdsmen and farmers, initiated by the Adamawa State Police Command, the Commissioner of Police, Olugbenga Adeyanju visited Jalingo-Maiha, Sorau and Belel communities in Maiha local government where he interacted with the council chairman, community/religious leaders and representatives of herdsmen and farmers among other stakeholders on the need to embrace the already existing peace in their areas.

In a statement Wednesday, issued by the Police Public Relations Officer, DSP Suleiman Yahya Nguroje, CP Adeyanju cautioned against actions, reactions, intentions and utterances that could be inimical to peace.

“Similarly, the CP has charged all police officers and other law enforcement agencies to act in accordance with the standard operational procedures of the Force and other extant laws guiding their overall conduct.

“The CP warned that any police officer found acting contrary to their oaths of office or behaving in a way and manner prejudicial to discipline, would strictly and personally be held liable,” Nguroje said.

Nguroje said that the council chairman and the district heads of Sorau and Belel have keyed into the CP’s peace and security initiative, aimed at preventing clashes between herdsmen and farmers. They have equally thanked the CP for the commendable initiative.

The Commissioner of police was accompanied by the Deputy Commissioner of Police in charge of operations, Commanders of 14/65 PMF, Mubi Area Command and other Senior Police Officers.

Jalingo-Maiha district, the headquarters of Maiha local government has been known for peace, love and mutual coexistence. It has not recorded any clash between farmers and herdsmen who are equally into farming.

However, a sage disclosed to the Periscope that the atmosphere of peace, breeding mutual coexistence was threatened when the former governor Bindow appointed and the court nullified district head reared his seeming supercilious, rather dictatorial head to force the herdsmen out of the grazing reserve area long bequeathed to them by the late district head of Jalingo-Maiha, His Highness Abubakar Suleiman, the Ubandoma Mubi of blessed memory.

The herdsmen, having sensed that the fantastic display of fascism would only be but temporary, were not to be intimidated by the malnourished leadership against a peace living, peace loving and peacekeeping community tagged as Makkah and Madinah, put together model.

Speaking with the council chairman, Dr. Idi Ali Amin, who earlier initiated and hosted an international peace and security summit between and among district heads of Maiha LGA and border towns in Cameroon, revealed to the Periscope that “in Maiha, peace is our uncompromising treasure; a pillar that strengthens the love and our unity in diversity. It is the source of our security for project and prospect.